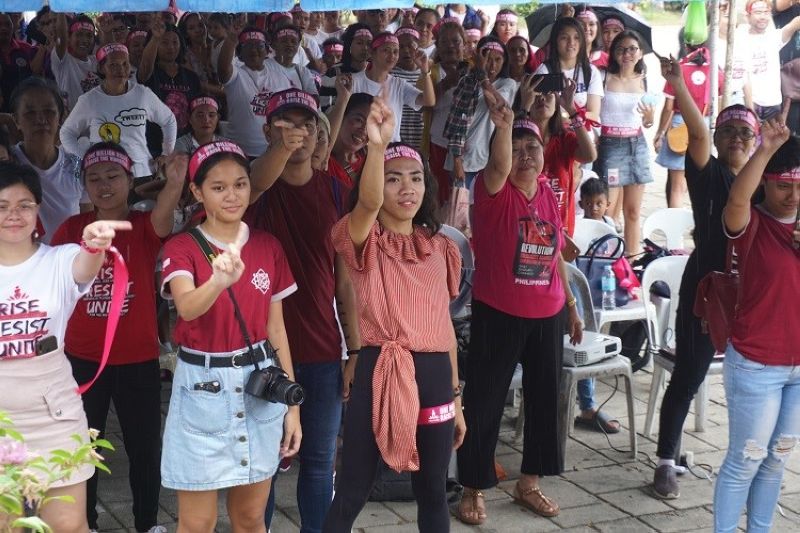 AROUND 400 members of various women's advocacy groups braved the heat and rain as they celebrated the annual One Billion Rising (OBR) Cebu at the Plaza Independencia, Friday, March 6, 2020.

OBR, a global campaign on violence against women, is part of the 109th celebration of the International Women's Month celebration.

The "billion" refers to the United Nations statistics that one in three women will be beaten or raped during her lifetime--that's one billion women and girls.

OBR served as an opportunity for conveners and different stakeholders to show solidarity among women as they continue to fight not only for women's rights, but also to rise for land and jobs.

In her welcome speech, Leny Ocasiones, chairperson of General Assembly Binding Women for Reforms, Integrity, Equality, Leadership, and Action (Gabriela) Cebu, condemned the alleged sexual abuse committed by a chief of police in Argao, Cebu against a woman detainee.

(It's a huge irony. We run to the police when we need help but the reality right now in our society is they, government agencies, are exploiting women.)

Aside from sexual violence, Ocasiones also noted of state violence which, she said, is felt by Filipinos.

Among these state violence include the continued contractualization, the continued nature abuse through several reclamation processes and the threat to freedom of the press relating to the ongoing franchise renewal issue of ABS-CBN.

Belinda Allere, member of the Urban Poor, also expressed her disagreement to the ongoing demolition processes in line with road clearing operations of the government.

(Sidewalk vedors, small businesses are cleared from the streets but why do pay parkings remain.)

The event culminated with a community dance symbolizing defiance of the injustices women suffer. (WBS)