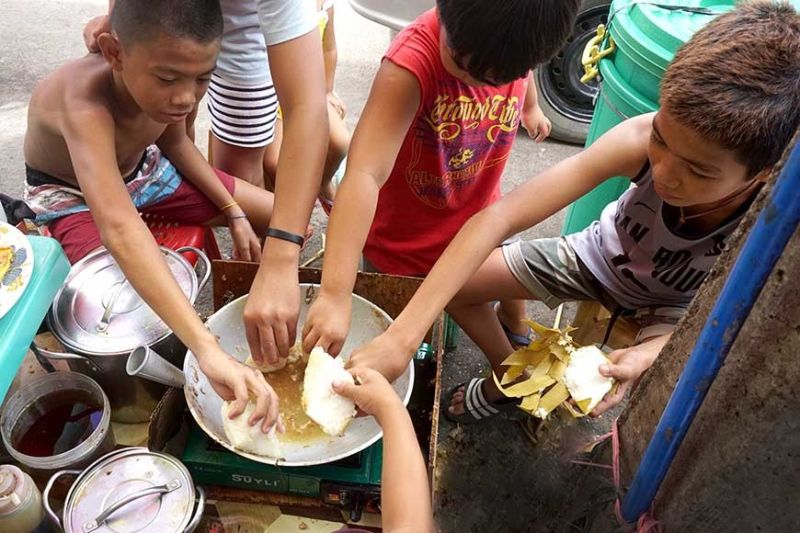 FURY OVER ‘TUSLOB BUWA’: Children enjoy a meal of tuslob buwa, which involves dipping rice into a frying pan containing a sauce made of pig brains and liver, in Brgy. Pasil, Cebu City. Netizens reacted with anger after a restaurant had the term “tuslob buwa” trademarked because it is a commonplace Bisaya term just like lechon. (Photo by Alex Badayos)

FUROR erupted on social media over the trademarking of a popular dish and cooking method known as “tuslob buwa.”

It also posted photos showing a signboard of Tuslob Buwa with a customized design.

Azul said the term “Tuslob Buwa” cannot be used by anyone or anywhere without its consent.

Bisdak netizens rose up in arms on social media and angrily questioned the trademarking of “tuslob buwa” because it is a commonplace Bisaya term just like lechon.

As a dish, tuslob buwa has for its ingredients pig’s brain and liver, spices such as garlic and onion, salted shrimp, corn starch diluted with water, and butter or oil all dumped and stirred in a big cauldron. It’s eaten with puso (or hanging rice) which is dipped into the cauldron of the simmering pasty dish.

This is how the term tuslob buwa got its origin—the puso is dipped or “ituslob” in the simmering paste or “buwa” of pig’s brain and liver.

The furor has reached the attention of the folks of Barangays Suba and Pasil, Cebu City, where the dish was first known.

Suba Barangay Captain Joel Sable said “tuslob buwa” originally came from Suba and Pasil, where it is cooked and sold in the public market.

Suba Councilor Jose Cabaral said the matter will be discussed in the Barangay Council session on Monday, March 9 and “we will take legal action.”

Barangay Suba celebrates Tuslob-Buwa Festival every January as one of the activities leading up to the barangay’s annual fiesta, which falls on the same day as the Feast of the Sto. Niño.

“If the barangay is the first to use, they can file for cancellation of the trademark already issued by the IPO,” said Perez when reached by SunStar Cebu for his opinion.

Perez said if the tuslob-buwa originated there, the barangay has “a superior right to this and should register it as a geographic indicator.”

Moreover, he said, “if this was coined a long time ago and preceded the registration, it is evident that the registration is in bad faith and only sought to take advantage of the good will already created by this geographic indicator.”

He cited the provisions on marks that cannot be registered under the IP Code:

1. If the mark consists of signs that are generic for the goods or services that they seek to identify;

2. If it consists exclusively of signs or of indications that have become customary or usual to designate the goods or services in everyday language or bona fide and established trade practice;

3. If it consists exclusively of signs or of indications that may serve in trade to designate the kind, quality, quantity, intended purpose, value, geographic origin, time or production of the good or rendering of the services or other characteristics of the goods or services; or

4. If it is likely to mislead the public, particularly as to the nature, quality, characteristics or geographic origin of the goods or services.

“Question to ask the registrant is, why of all the words in the Cebuano dialect did he choose this phrase that was already in existence?” said Perez, a former professor on IP at the University of San Carlos College of Law.

“Tuslob Buwa has been and is still the go-to breakfast of Pasilnon and Subanian students. How could they claim Tuslob Buwa when this existed even before Azul started their business?

Azul Cebu declined to comment on the negative feedback it got for the trademark.

Based on the Intellectual Property Code of the Philippines, a petition to cancel a registration of a mark may be filed with the Bureau of Legal Affairs within five years from the date of the registration of the mark. (JJL WITH CSL, LQ3)