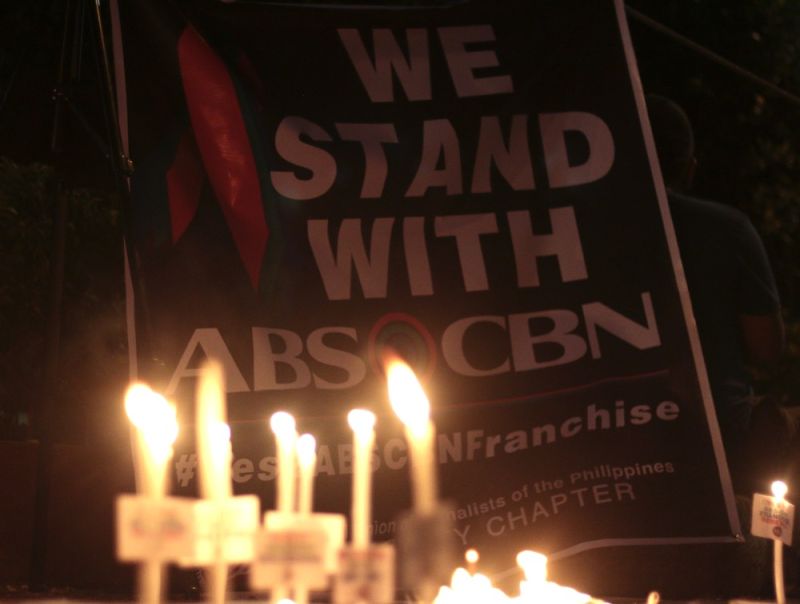 FOLLOWING the pronouncement of Davao City Mayor Sara Duterte-Carpio’s support for the franchise renewal of ABS-CBN, the Nation Union of Journalist of the Philippines (NUJP) is also seeking the support of Dabawenyos for the network’s renewal, which is set to expire May this year.

The protest was participated by other progressive groups to show solidarity with the biggest network in the country, wherein 11,000 regular and contractual employees might lose their jobs if the network would shut down.

NUJP national directorate Kath Cortez said that while support from public or private individuals is advantageous, she said the recent pronouncement of the Presidential daughter on the matter is a proof of how huge a loss it would be if ABS-CBN would shut down.

“Nakapag-testify (She had testified) siya how ABS-CBN helps Dabawenyos in terms of development, news, and services,” Cortez said told SunStar Davao after the activity.

She added Duterte-Carpio, chairperson of the regional party Hugpong ng Pagbabago, has close allies in both the House of Representatives and Senate which would heed to her call to support and vote in favor for the network’s renewal.

The mayor, in a previous report, bared her support to the network’s franchise renewal, saying her constituents in Davao City are backing ABS-CBN’s renewal.

She also said she is hopeful that issues surrounding the franchise renewal of the Kapamilya network will be resolved “in a very positive way”.

With only few days left before the Congress goes on a break next week, Cortez said the group hopes the two Houses will prioritize the franchise renewal as urgent matter.

“Also (to) review kung kaya ba ipasa ASAP kining renewal sa franchise (We are also urging them to review the franchise renewal as soon as possible),” she said

Aside from staging a weekly protest, she said NUJP had previously launched a signature campaign wherein they already submitted a partial list of 200,000 signatures from petitioners that was already submitted to Congress, seeking to renew the franchise of the network. The group, initially, staged its first protest in front of the ABS-CBN Broadcasting Complex in Shrine Hills, Matina on February 28.

House Speaker Alan Peter Cayetano announced Wednesday, March 4, said the House committee on legislative franchise will take up the 11 pending bills seeking to renew the ABS-CBN franchise for another 25 years on March 10.

Cortez said NUJP welcomes the development despite a limited time as the livelihood of the network’s employees is at stake.

President Rodrigo Duterte, in his previous engagement, opposed the network’s renewal after failing to air his political advertisement during the 2016 elections, and for airing a malicious political campaign against him.

He, however, accepted ABS-CBN chief executive officer Carlo Katigbak’s apology, but he said he could not do anything to stop the quo warranto petition filed by the Office of the Solicitor General against the television network, and its subsidiary ABS-CBN Convergence Inc. to have been broadcasting for a fee, which is beyond the scope of its legislative franchise.