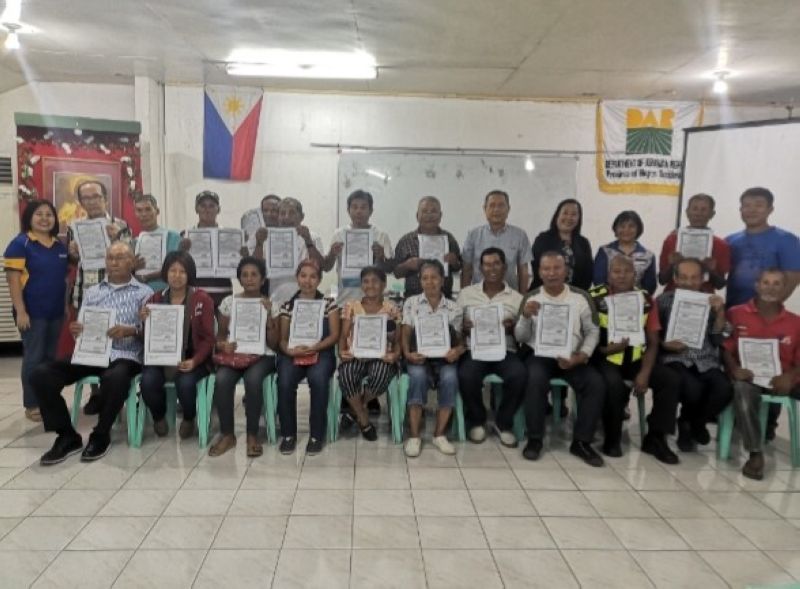 BACOLOD. DAR personnel with farmer-beneficiaries in Bacolod City during the distribution of Cloas covering 55 hectares of redocumented land. (Contributed photo)

THE Department of Agrarian Reform (DAR) has redocumented and distributed a total of 151 hectares of land in the northern part of Negros Occidental.

In Bacolod City, 55 hectares were redocumented and given to 19 agrarian reform beneficiaries (ARBs) in an individual certificate of land ownership award (Cloa) distribution on March 5.

The landholding was formerly owned by Gilopez Kabayao located at Barangay Felisa.

Municipal Agrarian Reform Program Officer (Marpo) Edwin Sanchez, who led the activity at DAR-Negros Occidental Provincial Office in Bacolod City, said the DAR is created and founded to help and guide its stakeholders.

Sanchez said the agency continues to live its mandate to serve the farmer-beneficiaries.

"Now that you have attained your dreams to till, to farm and became the landowners of your respective areas, keep in mind to pay your taxes and other obligations," he told ARBs.

In Murcia town, about 30-hectare lands were redocumented and given to the 27 ARBs on February 27.

The landholding was formerly owned by Norma Tinsay located at Hacienda Wawa in Barangay Sta. Rosa.

Marpo Edelita Abanilla urged farmer-recipients to take good care of the land provided by the government.

"Make the land productive and engage in a progressive farming and business ventures," she also told farmers.

The remaining 60 hectares were redocumented and distributed to 56 ARBs in Cadiz City on February 26.

The landholding was formerly owned by Josefina Alibutdan, among others, located at Barangay Caduhaan.

"Always know your responsibilities and legal obligations to the land awarded to you," Marpo Rodrigo Jose Villaluna told ARBs during the distribution rites.

The redocumentation and distribution of land are provided under Administrative Order No. 3 Series of 1993, or the Rules and Procedures Governing the Issuance of Collective Cloas and Subsequent Issuance of Individual Titles to Co-owners.

It is also provided under Administrative Order No. 2 Series of 2019, or the Guidelines and Procedures on the Parcelization of Landholdings with Collective Cloas.

DAR-Negros Occidental I pointed out that the option to select a collective Cloas may be exercised by the ARBs under Section 25 of Republic Act 6657, or the Comprehensive Agrarian Reform Law of 1988.

The types of collective Cloas are co-ownership basis, farmers' cooperatives and some other forms of farmers’ collective organization, it said.

"Within ten years from the issuance of the collective Cloas, the DAR shall retain the option to generate the individual certificate in the name of the ARBs based on their request and the approved subdivision plan of the landholding and supported by the Deed of Participation executed by all co-owners named in the collective Cloas," it added. (EPN)