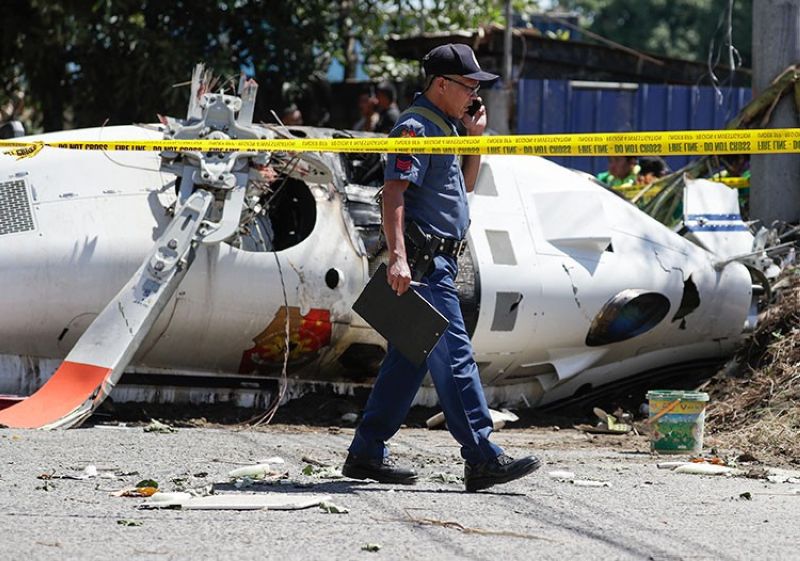 PHILIPPINE National Police (PNP) Chief Archie Gamboa on Monday, March 9, ruled out sabotage in the helicopter crash that injured him and left two of his “mistah” in critical condition.

Gamboa said he was supposed to be seated on the left side, where Director for Intelligence Mariel Magaway was seated. The pilot, however, told him to sit on the right side.

It was the left side that slammed to the ground when the helicopter fell after hitting some power lines. Major General Magaway and Major General Jose Victor Ramos, head of the Directorate for Comptrollership, were seated there.

They were both in critical condition. Gamboa said both are improving based on the latest report that he received.

Gamboa said it was purely an accident.

“Of course ‘yung sabotage, sinadya, I don't believe so. Ako personally convinced ako, nandun ako sa loob ng helicopter. Nobody in his right mind even what kind of interest he has in mind would do that,” he said in a press conference in Camp Crame.

It was the first time that Gamboa held a press conference following the crash at 7 a.m. Thursday morning, March 5, at the Laperal Compound in San Pedro, Laguna.

Gamboa, Magaway and Ramos along with PNP spokesperson Bernard Banac and Gamboa’s aide-de-camp Captain Kevin Gayramara (not Gayrama as identified by police earlier) were on their way to Camp Vicente Lim in Calamba for a command visit, after inspecting the impounding area of the Highway Patrol Group in San Pedro.

The twin-engine Bell 429 helicopter, a brand new rotorcraft acquired in 2018, was manned by two pilots and a crew member. It hit some power lines shortly after takeoff and crashed.

Gamboa, who sustained minor bruises on the face and in the arms, thanked those who prayed for him and his fellow police officials’ immediate recovery.

Ramos and Magaway, who sustained injuries in the head and in the spine, are under intensive care at the Asian Hospital in Muntinlupa City.

“I invite everyone to join us in fervent prayer for the continuous healing of my classmates MGen Ramos and MGen Magaway who remain under intensive care,” said Gamboa.

He declined to narrate what transpired before the crash happened, saying he would rather give his statement first to the Special Investigation Task Group (SITG) conducting investigation.

Lieutenant General Guillermo Eleazar, PNP deputy chief for operations and head of the SITG, said there were at least three angles that they were looking at: the zero visibility due to thick dust and debris in the landing zone, airworthiness of the helicopter and human error.

Brigadier General Banac, for his part, recounted what transpired before the crash.

Banac sustained minor bruises on the face and arms. He is also experiencing back pains due to spinal column compression.

Gamboa and Gayramara underwent treatment at the St. Luke’s Medical Center and were discharged on Friday, March 6, while Banac was cleared on Saturday.

Meanwhile, Gamboa said he did not give the SITG a timeline for the conduct of investigation.

“I do not want to rush things because... Ito probably ‘yung pinaka grabe kaya ayoko sila bigyan deadline as a matter of fact it will involve a lot of government agencies, we tap Philippine Airforce, the Civil Aeronautics Authority of the Philippines, ‘yung CAAP probably Bell also, so I do not want to give deadlines for this investigation by SITG,” he said. (SunStar Philippines)