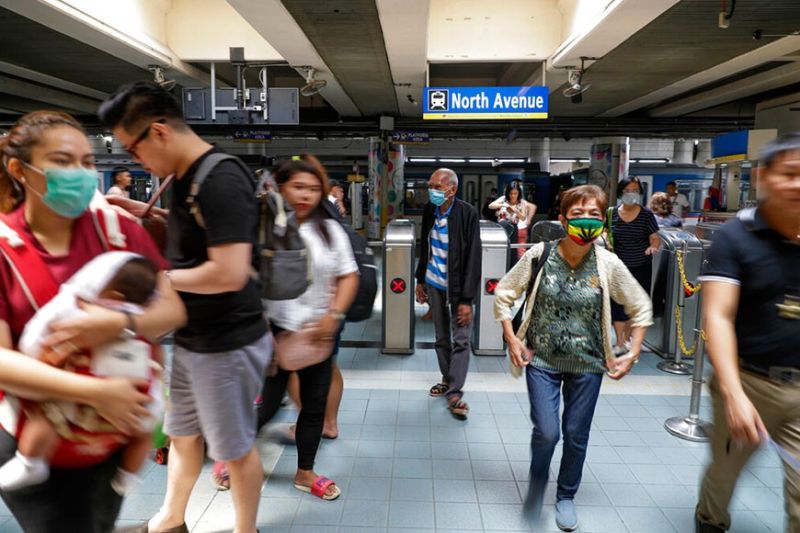 MANILA. People wear masks at a train station as a precautionary measure against the spread of the new coronavirus in Manila on Tuesday, March 10, 2020. For most people, the new coronavirus causes only mild or moderate symptoms, such as fever and cough. For some, especially older adults and people with existing health problems, it can cause more severe illness, including pneumonia. (AP)

THE Department of Health (DOH) has reported nine new confirmed cases of the coronavirus disease (Covid-19) in the country, bringing the total to 33.

The DOH said there were 20 confirmed cases as of Monday afternoon. The number then went up to 24 in the evening as announced by President Rodrigo Duterte in a press conference.

Patients 25 and 26 were brought to the New Clark City quarantine facility, and Patients 27 to 33 to The Medical City. (See list)

The DOH assured that its Epidemiology Bureau is conducting comprehensive contact tracing activities for all the confirmed cases.

Meanwhile, in Tudela town, Cebu, a Filipino overseas worker from Japan is under investigation for showing flu-like symptoms of the Covid-19.

Surveillance officials, he added, have started tracing persons who the woman may have come in contact with since arriving. These persons include a motorcycle driver, her relatives and seatmates in the vessel she took from Danao City to Camotes. Once reached, these persons would be monitored.

The woman was brought to the Eversley Childs Sanitarium in Mandaue City Tuesday for isolation.

Others who were monitored, the eight remaining South Korean nationals who were among the original 26 passengers from Daegu, North Gyeongsang province, South Korea, completed their 14-day quarantine period Tuesday, March 10.

Earlier, 17 of the 26 passengers returned to South Korea three days after arrival in Cebu. One moved to the New Clark City quarantine facility.

In Mandaue City, health centers will serve as fever clinics where those with fever may seek treatment. These fever clinics are another precautionary measure.

Dr. Rose Marie Tirado, Mandaue City Health Office chief, said there are six persons being monitored because they came from either Hong Kong or mainland China. They are under 14-day home quarantine.

In Lapu-Lapu City, two isolation rooms are being readied at the Lapu-Lapu District Hospital. The City Government is also eyeing two other sites also for purposes of isolating those being monitored for possible infection. These steps were in reaction to the state of public health emergency declaration of President Duterte.

Lapu-Lapu Mayor Junard Chan said he has identified a government building and an abandoned private building that would be converted into isolation sites.

Meanwhile, Cebu Gov. Gwendolyn Garcia denied issuing a statement that all workplaces with at least 50 employees should grant paid mandatory leave credits in relation to the Covid-19.

The post, which used the GMA News template for breaking news, also said that “all schools in the city will be closed for two weeks beginning March 12.”

“I deny in the strongest possible terms that that came from me,” Garcia said. (LMY, RTF, JCT, KFD, GCM)