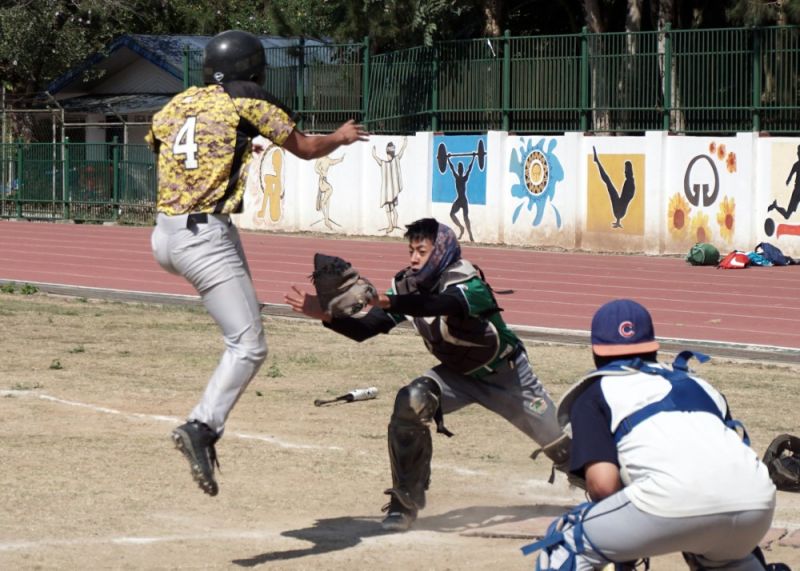 BAGUIO. A Baguio City National High School batter is tagged on the home plate by a UC Jaguars catcher during their game in the recently concluded 3rd Lawana Batted Balls Tournament. (Photo by Roderick Osis)

DESPITE the threat on Covid-19, the University of the Cordilleras is all fired up to defend its title in baseball in the Private Schools Athletic Association (Prisaa) slated in Tuguegarao, Cagayan next month.

The UC Jaguars are eyeing a repeat of bagging the gold inside the diamond in the weeklong sports competition for collegiate athletes from all over the country slated April 18 to 24.

Coach Rafael Lapeña remains optimistic of their chances of winning back to back with an almost intact core that will compete against top collegiate baseball teams in the country.

“We remain positive. I think our training will be a huge factor in our campaing,” said Lapeña.

The Jaguars, as part of their build -up for the upcoming Prisaa also joined the 3rd Lawana Cup Batted Balls Tournament were they topped the seniors division.

The roaring Jaguars claimed their first national title in baseball in 2019, six years after the school earned a title in softball, also in the Prisaa.

UC Jaguars made it to the finals after edging Region 10 in their semi-finals match then closed out the tournament with a 2 - 1 victory against Region 5 for the gold.

Prior to the opening, Takbuhang Makulay sa Cagayan will kick off the Prisaa National Games 2020.

According to the PRISAA website, Cagayan will experience a different version of Color Run conceptualized by Edgar Balasta, Prisaa’s national marketing officer and author of the biggest modified and annual fun run event in the country the Color Run Sorsogon who had 25,000 participants every year.

Takbuhan will gather around 20,000 runners according to the website to be participated by the Prisaa athletes nationwide and local schools, government and non-government agencies and organizations with a primary purpose and increasing community involvement in sports as the locals and athletes have their engagement to one another.

Cordillera made a huge splash with 39 golds, 39 silvers and 25 bronze medals en route to a decent fifth place finish during the 2019 edition held in Davao.

Composed of student athletes from Baguio Central University, Kings College of the Philippines, University of Baguio, and the University of the Cordilleras, the region had its hands full by winning bulk of its gold medals in boxing, weightlifting, and taekwondo.