UP capable of supplying 6,000 test kits 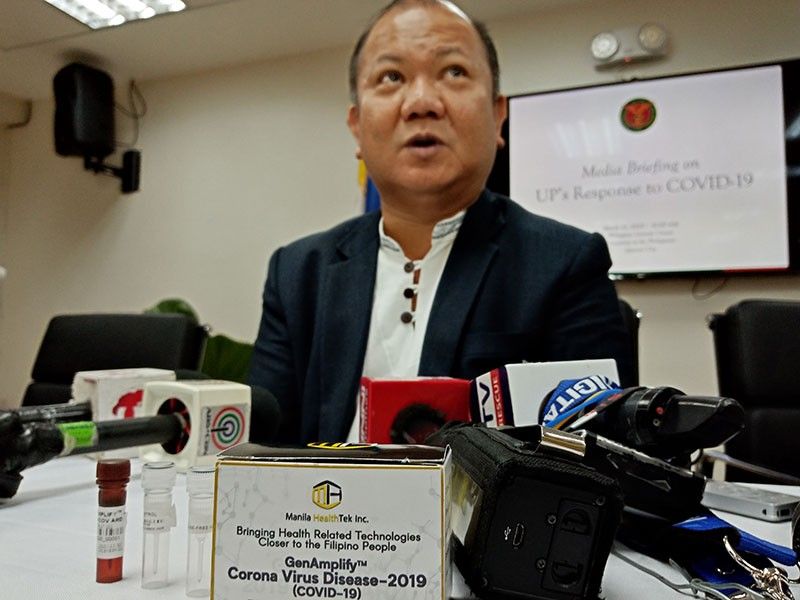 AS MANY as 6,000 locally developed diagnostic test kits for Covid-19 can be produced in just three weeks, the Philippine Genome Center said.

Dr. Raul Destura, Philippine Genome Center deputy executive director who led the UP National Institutes of Health in developing the Sars-CoV-2 PCR detection kits, said he is confident about the accuracy of the testing kits.

"I am very confident," Destura said in a press conference Thursday, March 12. Sars-CoV-2 is the name of the novel coronavirus given by the International Committee on Taxonomy of Viruses.

The kit was developed by Filipino scientists at the UP-NIH. The Food and Drug Administration (FDA) earlier issued a Certificate of Exemption for the detection kits, allowing its use for field testing coupled with gene sequencing at the Philippine Genome Center.

Health Secretary Francisco Duque III, however, said they could not use the locally developed test kits without an Emergency Use Listing (EUL) permit from the World Health Organization (WHO).

UP executive vice president Teodoro Herbosa insisted that the test kits may be used with just the approval of the FDA.

"All countries that are members of the WHO try to get advice from the WHO. It is not a governing body, it is an advisory body," Herbosa said.

"What regulates the government with drugs, vaccines, or test kits to be used in the health sector is the Philippine FDA," he said.

"They (FDA) regulate what can be sold and used in the Philippines," he added.

Destura said the kits are manufactured by two robots.

"Kasi yung ating manufacturer, it has the robotic manufacturing unit.. we can manufacture on a faster speed. In fact, we might have to add additional robots. Right now kasi, we have two," Destura said.

He said they could make available at least 1,000 kits a week and slowly ramp up production until they reach full capacity.

Destura added that they may have to expand the manufacturing area, but only after a Good Manufacturing Practice (GMP) approval.

GMP refers to a system for ensuring that products are consistently produced and controlled with quality standards.

It shall minimize the risks involved in any pharmaceutical production that cannot be eliminated through testing the final product.

"We are expanding to another area. Kailangan kasi na GMP certified eh to ensure that technology developed are in good quality," Destura said.

In an interview, Philippine General Hospital (PGH) Director Gerardo Legaspi disclosed the standard procedure for people who wish to be tested for Covid-19.

"So ang when this all started ang aming hospital infection unit already formulated a plan so ni-limit na ang entry points. May screening na, and then may mag i-interview bakit sila nandoon. If may lagnat ba or may travel history," Legaspi told Sunstar.

He explained that there is a separate tent for people who test positive for the virus and persons under investigation (PUI).

"So most of the patients naman are not severely sick, so kapag nag positive ang PUIs, they will have to stay in the same room kasama ng mga nag-positive," he added.

"Kasi everytime we move patients contamination of others tumataas," he said.

As of Thursday morning, the Department of Health (DOH) has confirmed that two patients have died from Covid-19 while two have returned to China.

Still admitted in hospitals across the country are 48 other Covid-19 patients, including two who are in critical condition. (SunStar Philippines)