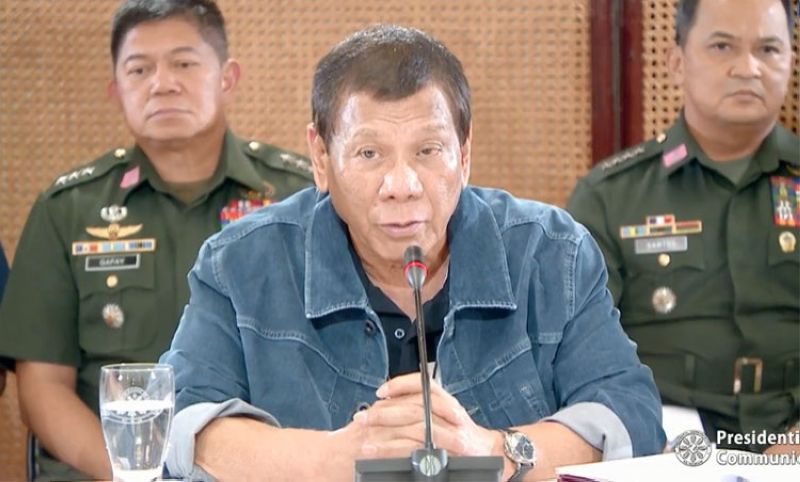 PRESIDENT Rodrigo Duterte on Thursday, March 12, placed the entire Metro Manila under "community quarantine" for 30 days as he approved the recommendation to raise the alert level for Covid-19 to Code Red sub-level 2.

The community quarantine, which is essentially a lockdown, will commence at midnight of March 15, 2020 and last until midnight of April 14, 2020, Duterte said in a message broadcast from Malacañang around 9 p.m. Thursday.

"For (Metro) Manila, ayaw naming gamitin 'yan pero.. kasi takot kayo sabihin lockdown but it's a lockdown. There is no struggle of power here. Walang away dito. Walang gyera. It's just a matter of protecting and defending you from Covid-19," the President said.

Local government units (LGUs) outside Metro Manila may also impose a localized community quarantine based on the guidelines issued by the Inter-Agency Task Force for the Management of Emerging Infectious Diseases in a resolution that it passed Thursday morning.

In the resolution, land, domestic air and domestic sea travel to and from Metro Manila will be suspended for 30 days.

Mass transport systems like the Metro Rail Transit (MRT), Light Rail Transit (LRT) and the Philippine National Railways (PNR) will continue to operate as long as social distancing is observed.

The suspension of classes in all levels is extended until April 12, 2020, but students will be required to fulfill educational requirements.

Except for public offices that provide health and emergency frontline services, work in the executive branch will be suspended but skeletal workforces will be formed to maintain delivery of services.

For the private sector, flexible work arrangements are encouraged. Guidelines will be issued by the Department of Labor and Employment.

But all manufacturing, retail and service establishments are advised to continue operations as long as social distancing measures are implemented.

The quarantine covers the entire Metro Manila or the National Capital Region, population 12.87 million as of 2015.

Duterte announced the quarantine shortly after meeting with the members of the task force.

He approved Resolution No. 11 which was passed by the task force earlier Thursday, March 12. An executive order containing the recommendations of the task force as stated in the resolution will be issued to ensure implementation, the President added.

He urged the public not to trivialize the disease and to cooperate with the Department of Health (DOH), which is leading the task force.

"It's a serious one. It is true. H'wag ninyong maliitin. Do not minimize it...but do not kill yourself with worry because government is doing everything possible to make it, at least, controllable," he said.

"It's only the medical people, and medical experts, who can help us. So listen to them," he added.

Duterte also appealed for calm and sought to assuage the nation, assuring that he is not imposing martial law.

"Try to obey what government is suggesting or ordering you to do. H'wag kayong matakot, h'wag kayong ma-nerbyos," he added.

Several hours before the task force passed the resolution, the World Health Organization (WHO) declared a pandemic over Covid-19 while Philippine health authorities confirmed the second mortality in the country and the first cases in the Visayas and Mindanao.

In its resolution, the task force set the guidelines for other LGUs that may impose a localized community quarantine as follows:

* A barangay-wide quarantine may be imposed when there are at least two Covid-19 cases belonging to different households;

* A municipality/city-wide quarantine may be imposed if there are at least two positive Covid-19 cases in different barangays in the town or city; and

* A province-wide quarantine is advised when there are at least two positive Covid-19 cases from different towns within the province.

Local government units that impose community quarantine may access their quick response fund (QRF) upon the declaration of a state of calamity.

The resolution also said entry travel restrictions remain, except for Filipino citizens and their foreign spouses and children as well as holders of permanent resident visa and diplomatic visa.

Overseas Filipino workers will be allowed to travel to China, except Hubei province, as long as they sign a waiver that they understand the risks involved.

These measures shall be subject to close monitoring and reassessment daily.

As of Thursday, the DOH has logged a total of 52 Covid-19 cases across the country, with the 49 cases reported only in the last six days.

Of the total, five patients have died -- a 44-year-old Chinese tourist at the San Lazaro Hospital, a 67-year-old Filipino woman at the Makati Medical Center, a diabetic woman and her diabetic and hypertensive husband (considered the first cases of local transmission) who were confined at the Research Institute for Tropical Medicine, and a hypertensive patient admitted at the Philippine Heart Center.

Health Secretary Francisco Duque III earlier admitted that the public health sector does not have enough resources to combat the disease.

The DOH said it needs at least P3.1 billion over the next 90 days to procure personal protective equipment and diagnostic test kits as well as pay additional personnel at the Bureau of Quarantine.

Funding is not an issue, but Duque said they are constrained by global supply chain problems.

The DOH is procuring P2 billion worth of personal protective equipment that will be used by about 5,000 health workers, who will work eight-hour shifts for 90 days.

Delivery of these materials will be from April 3 to May 3, 2020, Duque said. (With MVI/SunStar Philippines)