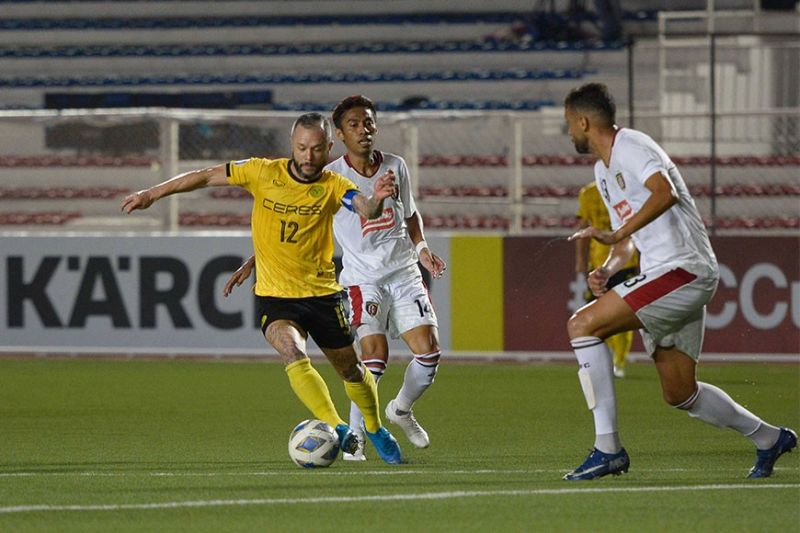 NO CROWD? No problem for Philippine champions Ceres Negros FC as they continued their dominance in Group G of the ongoing 2020 AFC Cup following an onslaught against the visiting Bali United of Indonesia in a closed-door match at the Rizal Memorial Stadium last Tuesday evening.

It’s an unusual view having empty seats at RMS with the Busmen playing their final home game in the group. This precautionary measure initiated by the AFC and the club organization was in response to President Rodrigo Duterte’s recent declaration of State of Health Emergency to prevent the local transmission of the Covid-19.

Early in the match, both sides tried to take control of the offensive flow, but the visitors showed some defensive stuff to deny the home squad of making decent passes and shots.

But, the Busmen led by their skipper Stephan Schrock orchestrated an offensive attack from the central midfield towards the box and took a flashing strike against the Bali’s keeper. However, the Bali custodian unable to hold on to the ball as it bounced towards OJ Porteria, who sent Busmen’s first goal in the 35th minute.

Ceres FC almost doubled the scoreboard with Robert Mendy’s bicycle kick attempt but his shot went way above the crossbar as his team ended the first 45 minutes with a goal advantage.

In the second half, the Busmen finally doubled the lead with Benvienido Marañon nailed a penalty shot in the 54th minute after Bali fouled Schrock inside the box. Fifteen minutes after his initial goal, Marañon scored a brace in the 69th minute on a header off a corner from Schrock.

With the momentum on their side, the Busmen aggressively attacked Bali’s defense as they delivered good passes which allowed Mendey to connect Ceres FC fourth goal on a transition offense.

Ceres FC Coach Resto Vidakovic admitted that it was still a hard-earned victory. “It’s hard to play against a team that defends too deep. But, the players did their best to win.”

Ceres Negros FC currently on top of Group G with 2 wins and a draw for 7 points.