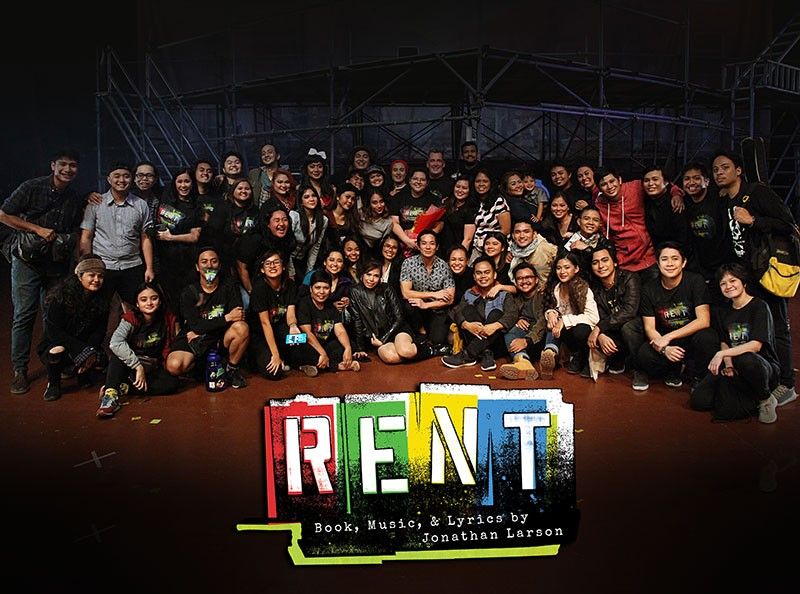 SEEING your favorite musical being performed onstage is one thing, but being the backbone to its success as it explodes into a full-blown musical production is a reality most directors can only dream of having.

For Miren Sofia Jordana, it was most certainly a dream come true as she made her directorial debut during the staging of “Rent” on Feb. 22, 2020 in the Luce Auditorium of Silliman University.

“‘Rent’ is my favorite musical,” she said. “It’s the first musical where I cried... in all the musicals I watched. If I’m going to direct a play, I have to direct something that means a lot to me, and the first thing that came to my head was ‘Rent.’”

“Rent” follows the story of a group of impoverished young artists struggling to make ends meet in Lower Manhattan’s East Village, under the shadow of HIV/Aids, and the use of drugs. The musical was written and directed by Jonathan Larson, who was largely inspired by Giacomo Puccini’s opera, “La Bohème.” Larson’s adaptation draws distinct parallels to the Italian opera.

“Rent” has quite a tough plot to follow for people unfamiliar with the story. This is why Miren decided to subtly identify the space onstage to allow the audience to link certain characters to a specific place. This is most observed in the use of one long table placed diagonally on center house right, and a trash can and chair on center house left to signify that events are taking place in Mark and Roger’s apartment.

However, Miren’s artistic vision for her production of “Rent” is a unique take that draws on real life elements represented by movements, and dance-heavy performances. During the song, “Rent,” Mark and Roger’s electricity is cut off—resulting in a blackout. In most Broadway productions, the stage lights switch off to signal the blackout, but are eventually used to light the actors as they move across the stage. In this production of “Rent,” the creative use of flashlights and stage lights emphasized the complete lack of electricity in the loft. Characters such as Tom, Maureen, Roger, and Mark were lit using the flashlights the ensemble brought with them. “It’s a blackout,” Miren explained. “And if you’re living in an industrial building, what’s the first thing you would use to find light? That would be a flashlight. So why would you not incorporate that in the production?”

Another beautiful artistic choice was the heartbreaking dance that portrayed the tragic story of Roger’s previous relationship. The dance served as a visual interpretation to Roger’s song, “One Song Glory.”

Aside from artistic choice, this production is set apart by its talented performers—most of whom have performed internationally. Miren used her international theatre connections to bring these performers to Dumaguete City.

Perhaps the most experienced cast member in theatre is Ima Castro, who has performed in shows abroad. Her theatre credits include “Pinaglayang Minamahal,” “Miss Saigon,” “Ghost,” “Queen of the Desert,” and many more. Dubbed the “ate” of the company, she strived to help young performers who were just starting out on their theatre journey. “We learn a lot from each other,” she said proudly. “These kids are very hardworking, and it’s amazing to be part of this because they approach me if they need something, and I help them. At the same time, I learn from them, so it’s amazing; it’s a give and take.”

She also expressed her hopes for Dumaguete’s theatre scene: “The only way is up for the theatre world here in Dumaguete, and I just hope I get to do more shows here.”

Proving that in theatre, the show must indeed go on, Eli Razo took over the role of Roger Davis barely a month before opening day. “I was supposed to just be the photographer or videographer,” he said bemusedly. “But a month before, the original Roger backed out during our shoot in Manila. I had one fricking month!” Eli is also an active member of Cebu’s local film scene. He won the Best Director Award in 2019’s Sinulog Short Film Festival for his short film entry, “Usa Ka Libo” or One Thousand. He agrees that film and stage acting are vastly different, but in the end, it all lies between the actor and the director: “It’s a two-way thing. It’s you and the director. You can do as much as you want, but without someone saying ‘hey look, that’s too small’; ‘hey look, that’s too big’; ‘hey look, you’re still doing film!’”

An important part of theatre is drawing on inspiration from others or from one’s self to be able to relate, and portray the character as genuinely as possible.

Gino Ramirez, who played the role of Angel Dumott Schunard, got his inspiration from himself. “Like Angel, I’m very inspired by positive energy. He and I are both bound by positive energy, and just seeing the good out of every situation.”

E.G. Arganza, a.k.a. the promiscuous Mimi Marquez, revealed that she “always watched sexy dancing videos” in order to capture Mimi’s provocativeness. She drew a lot of inspiration from Renée Elise Goldberry’s version of Mimi, particularly during the use of the ladder and railings in her song, “Out Tonight.” E.G. admits how her previous experience as Mimi during Guam’s staging of “Rent” helped her become more comfortable with the role.

Stephen John Ramirez, who also played the role of Mark Cohen in the staging of “Rent” in Guam, revealed that he personally sided more with Benny (played by Jed Alerta) instead of his own character because “there’s only so little of Mark that I can use of me.” His biggest takeaway on “Rent” is that “no matter what, all the struggles you go through—every day, every second—you just have to live every day as if it’s your last.”

In the end, it all comes down to the young woman who started it all. Miren’s experience with Broadway Youth Cebu’s “Miss Saigon: School Edition” opened the doors to exciting new possibilities abroad. She went on to Guam, and assisted in World Theatre Productions Guam with their productions of “Mamma Mia,” “Miss Saigon,” and “Rent.” Eventually, Miren established the Visayan theatre company Summit Theatre Productions in order to promote her production of “Rent.” Her passion for theatre surpassed the standards set by Silliman University, as she managed to stage a fully licensed Broadway production right in the heart of Dumaguete.

Miren would like to would like to credit her stepdad, Gabriel Velez Leyson, and her brother, Emmanuel Juan Jose Jordana Fernando for their continuous support, but most of all, she’d like to thank her mother, Dr. Maria Martina Jordana Leyson, “for how much she’s helped and supported me in this show,” Miren said. “She’s my strength.”

She plans to continue growing as a director by bringing the knowledge her mentors and consultants have given her during the production.

Miren’s favorite line from “Rent,” “The opposite of war isn’t peace; it’s creation,” is relevant to the society we face today, a society that verges on the brink of war too often for comfort. She continues that, “It’s important that people realize there are a lot of things that art can fix, and not a lot of people know that. Like art—you can deal with a lot of social and economic issues using art as a medium.”

To the future performers and directors, she advises: “If you have a vision, just do it. It costs a lot of money, I’m not gonna lie. But it’s worth it. Just believe in yourself, and believe in your art.”