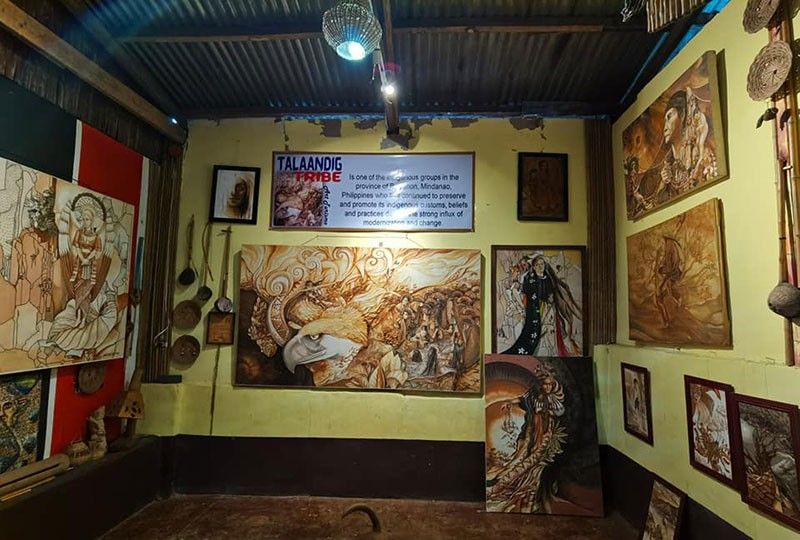 WELCOME. The entrance to her house is an exhibit area, but her art extends upto the kitchen of her home. (Photo by Kublai P. Millan) 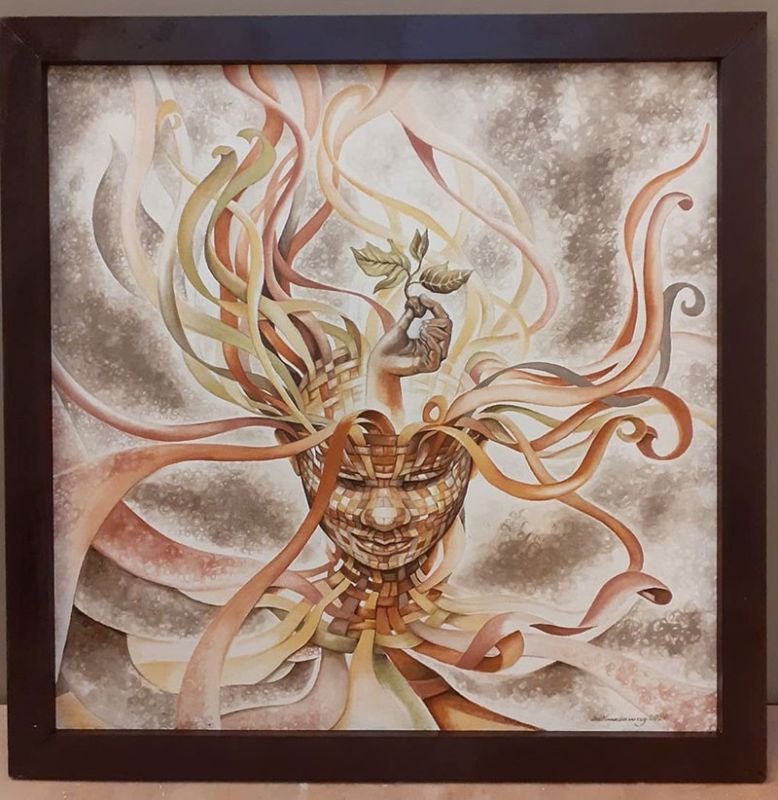 WHAT’S INSIDE YOUR BASKET? A 2ft x 2 ft painting that is part of the Romance with Soil art exhibit of Talaandig soil painters at TheBauHaus in Bajada, Davao City. (Photo by Kublai P. Millan) 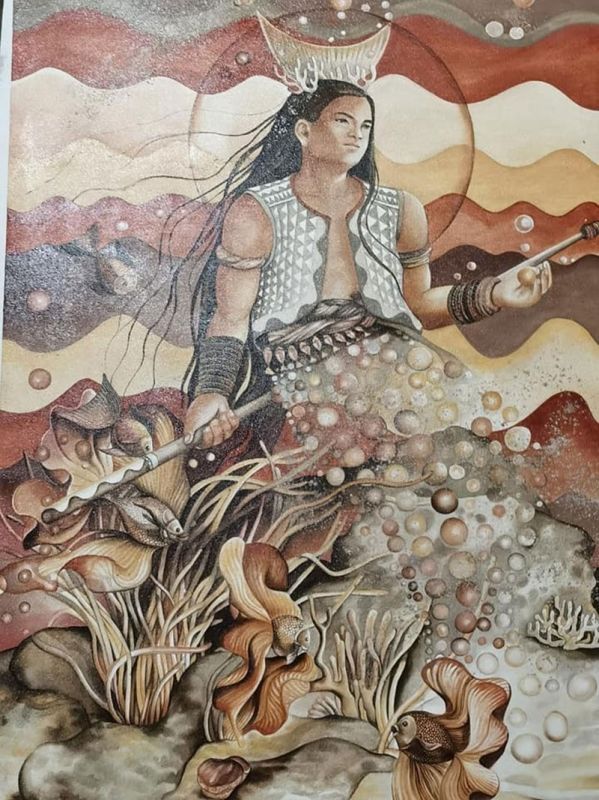 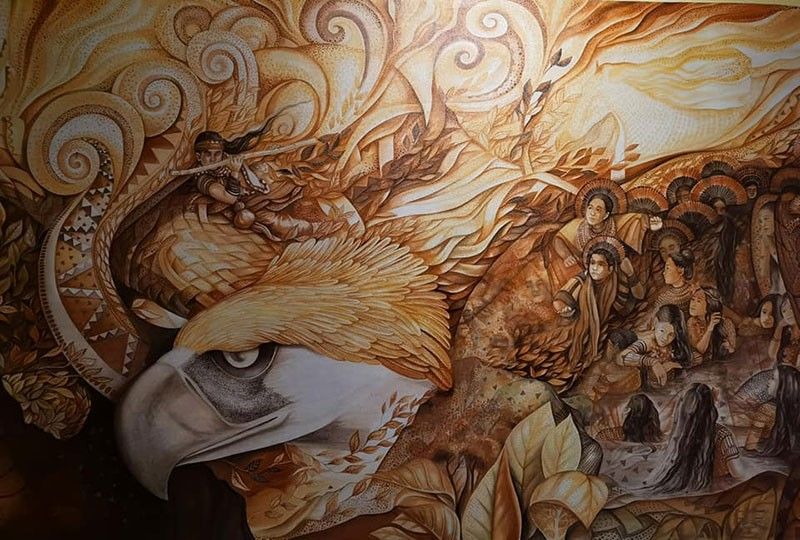 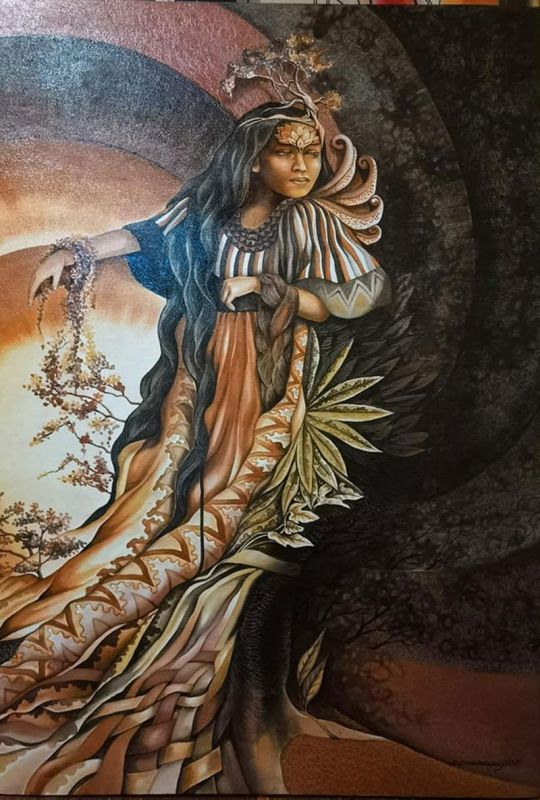 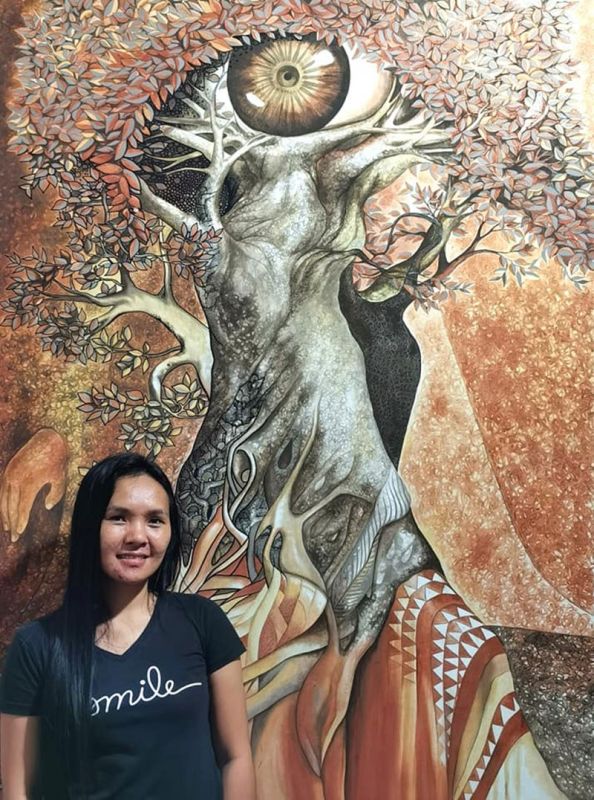 THE ARTIST AND HER ART. Salima Silagon Saway Agraan at home with one of her artworks. (Photo by Kublai P. Millan)

Named to take care of the tribe, she found her medium thru soil

“I ASPIRE to be able to communicate indigenous knowledge through my art. I look at my art as a window to the yesteryears for the coming generations to see through. It is also my aim as an artist to make soil painting known as a medium and art that has the mark of the indigenous Filipino,” Salima Silagon Saway-Agraan wrote in Tagalog when asked to describe herself and her art.

Salima is proudly Talaandig, an indigenous tribe of Bukidnon, and is among the most known soil painters there, second only to her elder brother Rodelio “Waway” Linsahay Saway, the recognized father of Talaandig soil painting.

Entering her home along the highway that leads to barangay Songco in Lantapan, Bukidnon, is like being Alice falling into the rabbit hole. (That’s in Alice in Wonderland for those who are not familiar with children’s classic literature).

She’s one of the artists featured in TheBauhaus’ maiden exhibit at Dona Vicenta Village in Bajada, Davao City (near Chowking Bajada), and her single artwork there gives you a hint to her attention to details, the delicateness of her strokes, and her narrative. That painting is entitled, “Inu Sa Tagu Hu Bukag Nu (What’s Inside Your Basket)?” where the basket is the mind of the person and thus asks if what is inside is relevant to humanity. This painting is small, just 2 feet x 2 feet.

But walk into her home, which she turned into her workshop and gallery and be astounded by her giant paintings.

She takes her art seriously, and sees this as the manifestation of her name. The youngest of the brood of 18 of Datu Kinulintang, who in his lifetime served as the overall chieftain of the Talaandig tribe but who died at the age of 72 when she was just five. The first set of siblings is where Waway and two other known tribal leaders, Datu Adolino (Makapukaw) and Datu Victorino (MIgketay) belong. They have seven siblings from the second mother, and three from Salima’s mother.

“Salima sa intugun ha mangalima hu kultura daw Kaliwatan ki Apu Agbibilin daw ki Apu Bai Guinamayon (Salima to take good care of the culture and the descendants of Apu Agbibilin and Apu Bai Guinamayon, the first people of Mindanao Island after the World Great Flood in the Talaandig epic story). Apu Salima in the indigenous peoples epic became the wife of Apu Saulana the caretaker of the jar, the indigenous peoples’ symbol of golden rule, symbol of peace,” she said in describing what her name means. Salima is from the word Alima or hands connoting nurturing.

“Because I was given this name, I understand that as the youngest in the brood my father was hoping I can take up the role of being the Salima of my generation, to take care of the culture and the tribe,” she added in Tagalog.

She has always been drawn to art even as a young child and was a constant choice as contestant in poster-making contests in school.

It was when she was 15 years old when Waway encouraged her to use soil as medium because it’s free and she can make as many as she wants. She has since grown as an artist who is grounded.

“First, it’s a reminder of our connection to the earth. Second, it reminds me of how important the soil is to our lives. Third, it’s free. Fourth, it has a soothing hue. Five, it reminds me that I have the responsibility as a human to take care of the earth,” she said of soil painting.

She also recalled what her mother Bai Tinangkil has said about soil painting, that it is a reminder of their indigenous spirituality, and that of being humble.

“Ugali ng lupa ang tapakan, dumihan, nasa kanya na ang lahat ng bigat, nguni’t ugali nitong kumanlong ng lahat na bagay at buhay, kung hindi siguro’y lahat na bagay ay palutanglutang. Mapagkumbaba ito at bumubuhay. Lahat nakaapak dito ngunit lahat ay makakatayo dahil dito (It’s the characteristic of soil to be stepped on, to be dirtied. The earth carries all the weight, but it continues to nurture and give life. Without the earth to connect to, we will just be floating aimlessly. The earth is humble yet life-giving. All of us step on it, yet all of us are able to stand up because of it),” she said.

Salima is being prepared to have her first-ever one-woman exhibit in Davao City, hopefully during Kadayawan (Covid-19 allowing). One thing is sure, she has long been ripe to grab the attention of major art collectors because she does not just have the skills, but has multi-dimensional story to tell.

Salima has exhibited her artworks through Kalinawa Art Awards Foundation, Bae Mindanao, Agyu sa Lupa and Huning Lumad. During the Singapore Biennale 2013: If the World Changed event, Salima and the Talaandig Artist Group stages an art exhibit entitles Memories of the Peoples of the Earth: The Revolution of the Talaandig People at the gallery of the Singapore Art Museum, the National Museum of Singapore and the Peranakan Museum. In the month of May 2019 she exhibited her works through KULARTs Incorporated during the 2019 International Arts Festival San Francisco, California, USA.