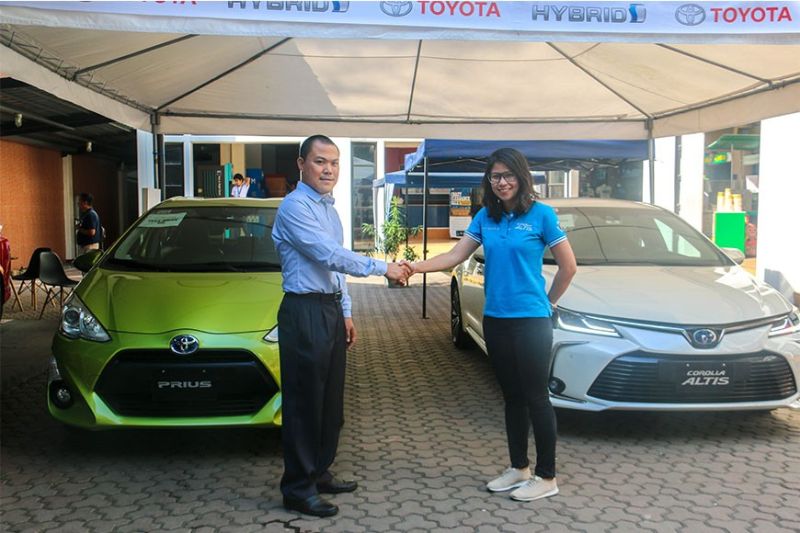 “We are pushing these models to be environment-friendly, fuel-efficient and low immersion cars in line with the Toyota Environment challenge,” Elvin G. Luciano, Marketing and Sales Operations officer disclosed.

Unlike other cars, the Toyota Hybrid cars is not complicated as you can simply jump in, hit the start button and get going as the Hybrid system will take care of the rest.

“It’s true. You won’t hear anything turned on because it is using the electric motor. Emission is said to be cut down significantly and that just adds up to the amazing features this models have,” a student noted after drive testing the car.

The hybrid system is two or more power sources working together in unison. It seamlessly integrates high torque of a battery-powered electric motor with the efficient power of a petrol-driven combustion engine making it the best eco-friendly cars as of today.

Reducing carbon footprint and minimizing the all-round environmental impact has been Toyota’s top priority for many years now thus by driving Toyota Hybrid, you become part of their fight to have a cleaner future.

These cars are said to be designed for highly urbanized and traffic congested cities like Cagayan de Oro. Imagine getting stuck in a traffic, idling, Toyota said it is during this time that both engine motor will automatically shut off without you even noticing and will then not consume any gas. Once you step on the pedal again, hybrid cars will start again and you’re all set to go on wherever destination you plan.

All we can expect is for Toyota to continue elevating the way their consumers drive. As of now, after visiting Cagayan de Oro City as their first visit in Mindanao on their Campus tour throughout the country, they are aiming to visit more and spread the awareness and together push for a cleaner future.

“We believe in getting the niche of the younger generation to give and spread the message and awareness to their peers, lalo na yung mga engineering students who in the future will be dealing with cars with these modern features and technology,” the Toyota said. (Renee Jane Barrio)