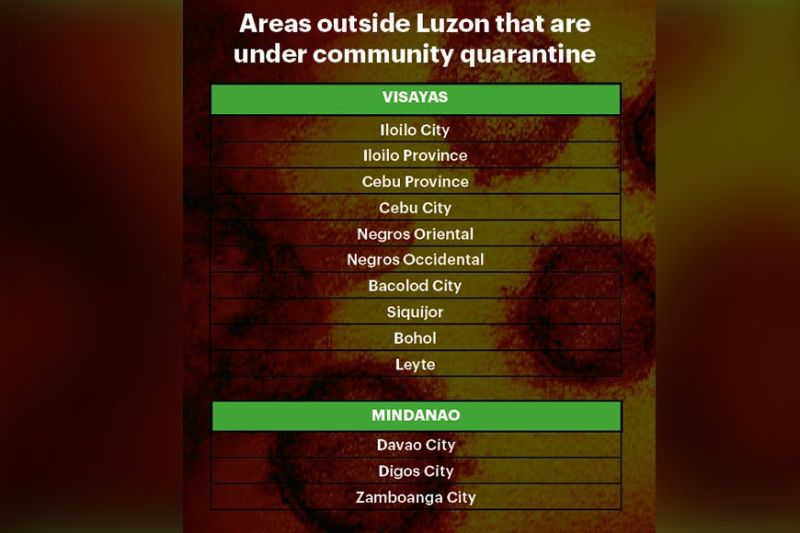 A 65-YEAR-OLD Filipino male confined in a private hospital in Mandaue City was the first positive case of coronavirus disease 2019 (Covid-19) in Cebu, the Department of Health (DOH) revealed Wednesday, March 18, 2020.

DOH 7 Director Jaime Bernadas confirmed the report, adding that the patient was on his way to recovery.

“He is about to be discharged,” he said. “Hopefully, he can share his experience with us.”

Bernadas said the patient had no history of travel outside the country. However, he had traveled in different cities of Mindanao and Manila in the past two months before he was confined in Chong Hua Hospital in Mandaue City.

Mandaue City now has one confirmed case of a patient infected with Covid-19. It still has 37 patients under investigation (PUI) and 64 persons under monitoring.

On the same day, Gov. Gwendolyn Garcia, Cebu City Mayor Edgardo Labella, Mandaue City Mayor Jonas Cortes and Lapu-Lapu City Mayor Junard Chan met inside the office of Presidential Assistant for the Visayas Michael Lloyd Dino. They coordinated their efforts in the fight against Covid-19, and they discussed the procurement of personal protective equipment for the medical frontliners.

The local officials urged Cebuanos not to panic.

Two of the 35 mayors in Cebu who attended a recent assembly in Manila have subjected themselves to home quarantine.

Garcia said the local chief executives took the initiative after Baliwag, Bulacan Mayor Ferdie Estrella tested positive for the new coronavirus. Estella was one of the attendees of the assembly participated in by mayors in the country.

The Chong Hua Hospital Mandaue management released a statement on its Facebook page, saying it established a containment section for all PUIs. However, it said that exposure to the severe acute respiratory syndrome coronavirus 2 (the virus that causes Covid-19) cannot be totally avoided.

Upon exposure to eventually confirmed cases, mandatory quarantine of its healthcare staff for the required period would have to be strictly followed.

Bernadas could not remember when the Mandaue patient was admitted, saying it could have been either March 6 or March 7. The test was taken either on March 10 or March 11, he said.

The patient, he said, was already considered a PUI upon his admission to the hospital.

Asked whether he would suggest a total lockdown in Cebu, Bernadas said it would be up to the local government units to implement it.

It showed that three of the new cases (PH190, PH192, PH193) have been admitted at the San Juan Medical Center, while one (PH189) is at Mandaluyong City Medical Center. The DOH has yet to release the profiles of the new confirmed cases.

The health department also announced Wednesday three new fatalities, bringing the death toll to 17. The DOH said the three all died on March 17.

Aside from the deaths and new positive cases, the DOH announced three new recoveries Wednesday, bringing the total number of patients who recovered from Covid-19 to seven. (WBS with reports from LMY, RTF, KFD, JJL & PAC)