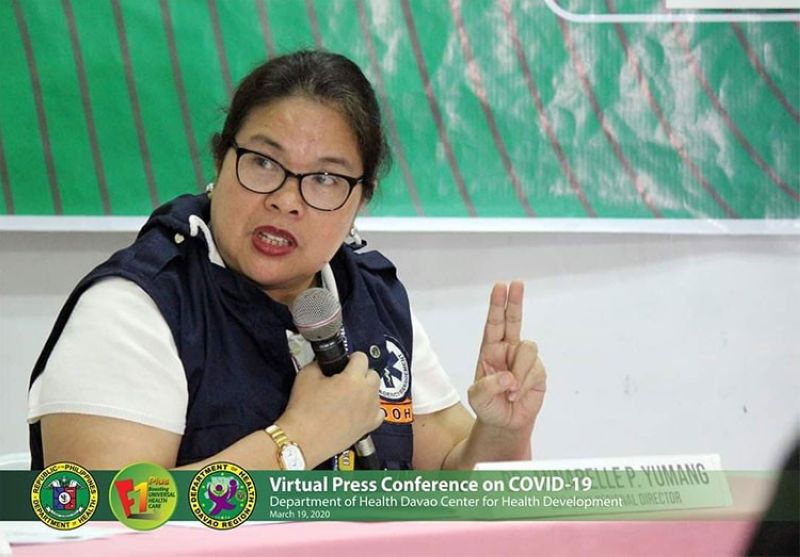 Photo from the DOH

ALTHOUGH there is no confirmation whether the three dead patients under investigation (PUI) in Davao Region were Covid-19 positive, the Department of Health (DOH)-Davao has started its contact tracing on people they have interacted with.

DOH-Davao Director Dr. Annabelle Yumang said in a virtual press conference via PIA Davao Region Facebook page that as of Thursday, March 19, they are still waiting for the laboratory results of the three fatalities.

Yumang provided a few details on the travel history of the patients.

One of the patients who died was a 78-year-old Filipino who previously traveled to Australia and arrived in the country on February 17 but developed symptoms on March 14.

The other patient was a 71-year-old Filipino who had travel history in Laguna and Manila before arriving in Davao last March 9.

The patient developed symptoms of epigastric pain with shortness of breathing. He was referred from a private hospital.

The third patient was a Korean national who previously traveled to Riyadh, Saudi Arabia, then Manila and manifested signs and symptoms such as fever and cough. He arrived in the country on March 9 and developed the symptoms on March 12.

The health authorities already warned that the virus is fatal for the elderly, the immuno-compromised, and those with underlying medical conditions.

DOH Davao Regional Epidemiology Surveillance Unit (Resu) head Dr. Cleofe Tabada, for her part, said Thursday, March 19, that without the result yet of the three dead PUIs, they kicked off their contact tracing especially with their immediate family members and friends.

Earlier, DOH reported the first case of Covid-19 in the region who was confined at Davao Regional Medical Center (DRMC).

As of Thursday, March 19, her condition has been stable with no more fever and other signs.

DOH-Davao is just waiting for the second laboratory result of the patient. If the result tested negative, she will be sent home.

Tabada admitted that they are facing a challenge in locating people. They already coordinated with the Criminal Investigation and Detection Group (CIDG), Bureau of Immigration (BI) and the local government units.

She added that on the confirmed case, they listed a total of 64 persons under monitoring (PUM) who have contacts with Covid-19 patients. They were advised to do self-quarantine.

So far, out of the 64, no one has reported to have manifested any of the virus symptoms.

Tabada added they are also locating the taxi driver who dropped the Covid-19 patient in her hometown in Pantukan, Davao de Oro for possible transmission.