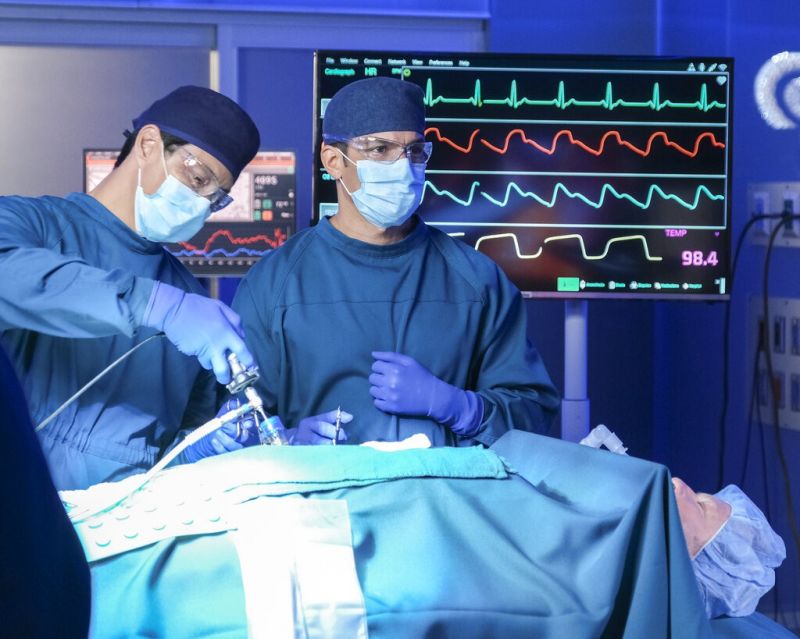 This image released by ABC shows a scene from “The Good Doctor.” They may only play doctors on TV, but they’re giving real-life help to hospitals that have taken a hit from the coronavirus outbreak. The Fox medical series “The Resident” has donated some of its on-set masks and gowns to a hospital in Atlanta, where it shoots, and the ABC show “The Good Doctor” is moving to do the same in its home base of Vancouver, Canada. (ABC via AP)

FROM finding ways to help others cope to sheltering in place to canceling events, here’s a look at some of the ways the entertainment industry is reacting to the spread of the coronavirus disease (Covid-19), which most people recover from but can cause severe illness in the elderly and those with preexisting medical conditions.

They may only play doctors on TV, but they’re giving real-life help to hospitals that have taken a hit from the coronavirus outbreak.

The Fox TV medical series “The Resident” has donated some of its on-set masks and gowns to a hospital in Atlanta, where it shoots, and the ABC show “The Good Doctor” is moving to do the same in its home base of Vancouver, Canada.

“To the entire team @theresidentonfox, thank you for this incredibly generous donation of #PPE from your set, including gowns, masks, gloves, and all the things our healthcare workers need to provide safe care for our community during #COVID19,” Dr. Karen Law of Grady Memorial Hospital said on Instagram, along with a photo of boxes of the donated gear.

Show representatives confirmed that the gear came from them, and representatives of “The Good Doctor” said they were in talks with government officials in Vancouver about what is needed at hospitals there.

The coronavirus has especially hit home for “The Good Doctor.” Actor Daniel Dae Kim, who is a producer on the show and appeared in several episodes last year, says he has tested positive for it.

Kim said in an Instagram video from his house in Hawaii that while flying home from a shoot in New York — where he was playing a doctor helping with a flu pandemic — he noticed an itch in his throat, followed by a tightness in his chest and body aches that prompted him to get tested.

Kim said he was not hospitalized, and began feeling better within a few days.

Cannes can’t go on as planned

France’s Cannes Film Festival has joined the long list of prestigious events delayed by the coronavirus pandemic. The 73rd edition of cinema’s storied annual gathering will not take place from May 12 to 23 as planned.

Organizers had for days held out on delaying the festival on the French Riviera, but finally relented Thursday and say they’re considering moving it to the end of June or the beginning of July.

The pandemic has started to affect events in the summer as well, with the Daytime Emmy Awards announcing Thursday that they were canceling their June ceremony.

“There are just too many unknowns right now, not the least of which is whether we would actually be permitted to stage an event in June” involving more than 1,000 participants, National Academy of Television Arts & Sciences Chairman Terry O’Reilly wrote in a letter to members.

The Daytime Emmy Awards had been scheduled for June 12 to 14 in California.

Even if movie theaters are open this summer, “Minions: The Rise of Gru” will not be hitting its planned July release date. Universal Pictures says Thursday that the animated film will not be completed by July 3 due to circumstances surrounding the coronavirus.

Chris Meledandri, the founder and CEO of Illumination, says in a statement that Illumination is closing its Paris studio due to the severity of the situation in France. Meledandri says they are abiding by the recommendations of the French government.

Rosie brings her friends for help

Rosie O’Donnell is reviving her old daytime talk show for one time only — and her guest list is impressive.

A who’s-who of Broadway and Hollywood — including Matthew Broderick and Sarah Jessica Parker, Neil Patrick Harris, Morgan Freeman, Gloria Estefan and Barry Manilow — plan to join O’Donnell on Sunday for a live streaming “The Rosie O’Donnell Show” as a fundraiser for The Actors Fund.

The show will be available at Broadway.com and livestreamed on Broadway.com’s YouTube channel. It starts at 7 p.m. Eastern.

The Metropolitan Opera in New York City is canceling the rest of its season and stopping pay of the orchestra, chorus and other unionized employees at the end of March due to the new coronavirus.

Met general manager Peter Gelb said he is giving up his $1.45 million salary until normal operations resume and higher-paid members of his administrative staff are having their pay reduced, by 10 percent for everyone earning more than $125,000 and by 25-50 percent at the top of the pay scale. The Met is launching an emergency fundraising drive of $50 million to $60 million and has obtained pledges from its board for $11 million of that.

“We have significant cash-flow issues that we have to deal with right now because of the loss of the box office,” Gelb said in an interview. “We’re also at the same time encouraging ticket buyers to donate their tickets rather than take refunds or at least put their money on account so we can hold onto it and reassign it to a future performance.”

With a $308 million budget this season, the Met is the largest performing-arts institution in the US Its season was to have ended May 9, and its 2020-21 season opens September 21. The crisis forced cancellation of about one-third of the season and three high-definition telecasts to movie theaters around the world.

With iPhones and Skype, Conan O’Brien is going back on the air.

The late-night host said he will resume putting out new episodes of TBS’ “Conan” on March 30. His staff will remain at home, and the show will be cobbled together with O’Brien on an iPhone and guests via Skype.

“This will not be pretty, but feel free to laugh at our attempt,” said O’Brien on Twitter. The late-night shows have all shut down production due to the coronavirus pandemic to avoid congregating live audiences and large TV crews. Some hosts have pumped out web videos.

O’Brien, though, is the first to try to remotely mount a full broadcast from home. (AP)