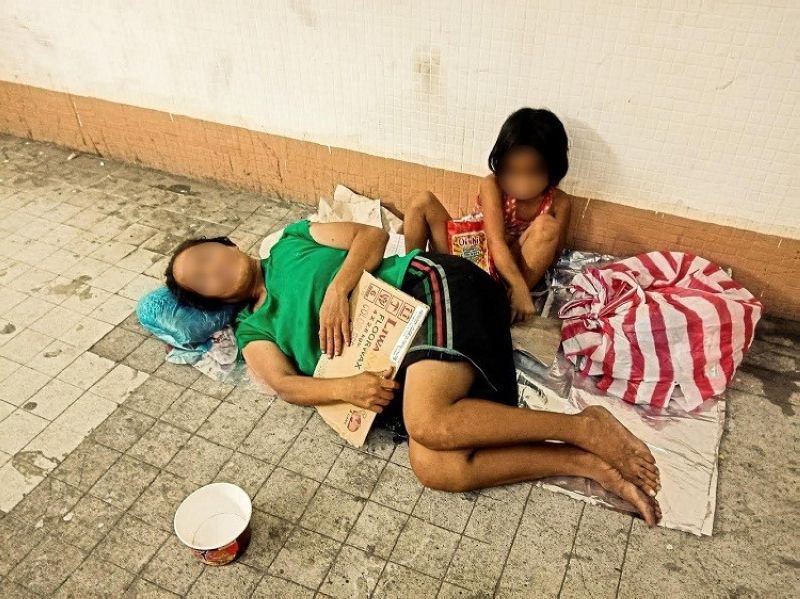 MANILA. Poverty-stricken citizens occupy the quiet streets of Manila on March 20, 2020. The people have been urged to stay at home as part of stricter quarantine measures. The homeless, however, remain on the streets. (Photo by Jove Moya/SunStar Philippines)

WITH the coronavirus public health problem becoming a hunger issue that “may trigger violence and longer term social tensions”, 32 business organizations in the country called on Congress to craft a massive fiscal stimulus package of up to P281 billion to provide financial aid to Filipinos.

The call was made a day after the Monetary Board rolled out monetary stimulus by cutting interest rates by 50 basis points, or half a percent, and relaxing regulations to encourage more lending by banks and pump prime the economy.

“The onus is now on the fiscal side,” the business groups said in a statement released Friday, March 20.

They are pushing for a stimulus program valued at between P277 billion and P281 billion, which will raise the country’s deficit-to-GDP ratio to 5.0 percent assuming gross domestic product (GDP) growth slows down to a range of 3.0 percent to 4.5 percent.

“This massive stimulus will save lives and protect our society but will not trigger alarm bells in the credit rating and global investment community as the Philippine debt/GDP measure is only likely to rise from 41.5% to 44.2%. It was almost 70% about 15 years ago,” the 32 groups added.

Besides, they noted that credit watchers might ease up as many countries bolster their economies to mitigate the impact of the Covid-19 pandemic.

Earlier, the government’s economic team announced a P27.1-billion package to help affected sectors cope with the drastic slowdown in economic activity due to the implementation of an enhanced community quarantine in Luzon and localized quarantine measures across the country.

The 32 business groups, however, said “a more forceful action on the fiscal front” is needed to reduce damage to the society and economy.

They pointed out that the sectors that bear the brunt of the lockdown are the informal workers who could no longer make a living and the regular workers who may be laid off as their employers reel from falling or disappearing revenues.

In their statement, the 32 business groups urged Congress to hold a special session to pass a supplemental budget for a stimulus package.

“The Department of Finance’s quick P27 billion package is a great start. The budgetary items there, as well as in proposals of Rep. Joey Salceda and others can and should be counted as part of a maximum fiscal response,” they said.

On top of this P27.1-billion program, the 32 groups said a bigger stimulus package should include the following:

Additional funds for CCT (conditional cash transfer) recipients, who are by definition the most financially vulnerable sector and will suffer greatly if/when they lose their livelihood during this time;

Additional funds to support DOLE and other programs to support workers affected by quarantine, whether directly or through companies, including when companies have advanced this;

Other measures to transfer funds or food to low-income families;

Additional funds for temporary hospitals and quarantine areas to ensure health system can cope with surge in patients;

Funds to support businesses — especially MSMEs — when COVID-19 is under control, with a focus on hiring;

Targeted subsidies to the health, tourism and transport industries as in Malaysia and Italy;

Increased public investment spending as in Germany; and

“We believe the government can and should adopt a fiscal stimulus program that will raise our deficit-to-GDP ratio to close to 5 percent, which is a usual red flag for credit watchers, though they will probably relax as an unprecedented number of countries buttress their economies,” they stated.

Even if economic growth slows down to 4.5 percent, or a gross domestic product (GDP) of about P20 trillion, a 5.0 percent deficit-to-GDP ratio will be around P1 trillion.

Since government has programmed a deficit of 3.6 percent, or about P720 billion, there is still room for a fiscal stimulus program of about P281 billion.

With a programmed deficit of P711 billion equivalent to 3.6 percent, there is still room to offer a stimulus package of roughly P277 billion.

The 32 groups noted that the business sector has responded to the call of President Rodrigo Duterte to provide financial relief to their employees.

But millions more are suffering from lost or decreased income.

“Many companies are doing what they can to keep their employees paid despite their inability to work and drastic declines in sales. But they can only do so much compared with the millions who are vulnerable to the downturn,” the groups said.

They stressed that the support the enhanced community quarantine in Luzon and other measures introduced to slow the spread of Covid-19, the respiratory disease caused by the novel coronavirus.

“However, the impact of the “lockdown” on millions of workers — both informal workers who are barred from making a living, and regular workers who may be laid off as companies respond to falling or disappearing sales — is literally a matter of life and death for them and their families,” the said.

“A health issue is now also a hunger issue and may trigger violence and longer term social tensions,” they added.

The 32 groups said funds may be sourced from savings or mandated savings of government agencies, except the Department of Health, local government units and other frontliners in the crisis.

Savings from government-owned and controlled corporations may also be used to support all vulnerable sectors.

“The Administration and the DOF have done a great job improving the country’s finances. Now is the most critical time to put it in service of the sovereign people,” they added.