Filipino films to watch while on lockdown 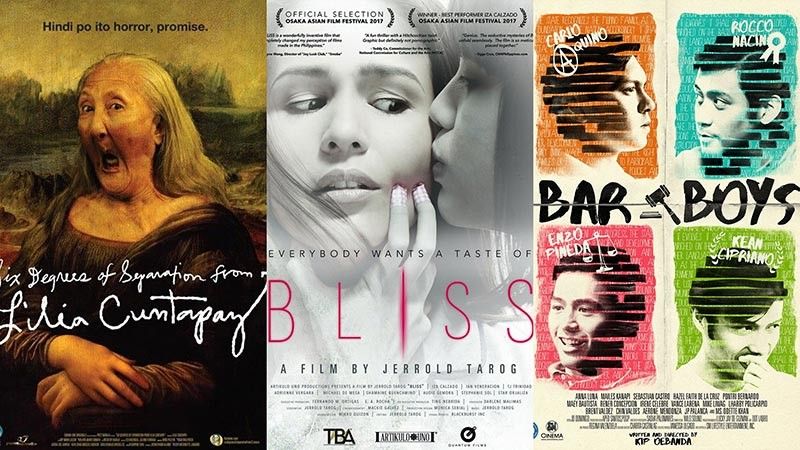 AS YOU are reading this, you are (assumingly) in your own residences, following the government’s strict home quarantine protocol.

If there is one good thing Covid-19 brings, it is the luxury of time which we didn’t have before.

With the advancement of the internet, fighting boredom is not that of a struggle. Thank God, several local film studios are uploading the full version of their movies on YouTube for free, while some made available for streaming in certain sites.

Take this chance to stream these Filipino movies while they are still available.

The movie is part of the first batch of entries pitted in the Pista ng Pelikulang Pilipino (PPP) in 2017. The story revolves around a group of friends, Christian (Enzo Pineda), Erik (Carlo Aquino), Joshua (Kean Cipriano) and Toran (Rocco Nacino), as they enter law school together. Their friendship will be tested as they face the challenges of law school, and prepare themselves for the bar examinations. While law students, and lawyers can highly relate to this movie, even those students struggling to achieve their dreams and aspirations in life can use each character as a life reference.

Movie critics and the like can attest to this PPP entry as Leaving Las Vegas Lite, and a That Thing Called Tadhana-ish story of a “boy-meets-girl” fate cliche, but in an odd fate. The plot runs between a seasoned call girl (Sue Ramirez) and gigolo (RK Bagatsing) had a one night “cuddle” session realizing that prostitutes are not entitled to the best part of love making. Both would soon realize that there is more to love than sex after entering a screwy relationship.

Discretion: you might find the movie confusing during the first few minutes of the film with what would seem to be “pointless and dragging dialogues”. The film would be introducing characters with their own respective struggles in life: from the landlord down to the tenants. The story would progress as all of the characters would be involved in a tension that would shake up, both actors and audience. I suggest to not skip any scene of the film.

Many might not recognize the late Lilia Cuntapay as a household name in Philippine showbiz, but her face is a recognizable gem in Pinoy horror movies. The film was made by the “hugot film” maker Antoinette Jadaone in 2011. This mockumentary film follows Cuntapay’s journey after being nominated for an award for the first time in her 30-year showbiz career. The eye-opening film tackles how bit players (extras) get lower morale in the local entertainment industry. The horror movie industry was never the same when Cuntapay passed away in 2016.

Bliss, the most controversial film in 2017, is a must watch film. The psychological horror, and mystery drama of Jerrold Tarog, is one of Iza Calzado’s most challenging roles to date.

Iza, who plays the role of Jane Ciego, is a popular and successful actress, who decided to produce her own film to win some respect in the industry. A terrible accident on the set of her dream project, however, leaves her temporary crippled, trapped in a house filled with bizarre phenomena and under the care of her unfeeling husband and a strange nurse.

Fans of OPM indie-folk band Ben&Ben will surely love this film. Real life couples Gabbi Garcia (Sarah), and Khalil Ramos (Zack) are both aspiring musicians, who were bound by their love to the rising OPM band.

Previously stuck to their past, the two would encounter different struggles in their 20s, which reflects the theme of Ben&Ben’s music.

Another Tarog masterpiece tells the story of Andrea (Lovi Poe) whose wedding is thrown into disarray when a mysterious guy, Dennis (Paulo Avelino) arrives and reminds her of the man she really loves. Andrea, throughout the film, is in constant doubt of marrying the man she does not love. The closing theme, performed by UDD (Up Dharma Down), is a perfect chilling soundtrack.

Written and directed by Mike de Leon (the man behind iconic Pinoy films Batch ‘81 and Sister Stella L) ventures into trying to create a film on the life of José Rizal, particularly on his supposed retraction of his writings against the Catholic Church in the Philippines during the Spanish colonization period in the country. Rizal’s views are evident in his two novels Noli Me Tangere and El Filibusterismo. The mockumentary was done mainly by “interviewing” key individuals in Rizal’s life, including his love interest and supposed wife Josephine Bracken.

One of the worst forms of child labor in the illegal fishing system. Muro-Ami (Reef Hunters) is a 1999 Filipino film that follows the story of Fredo (Cesar Montano), a ruthless captain of 150 muro-ami divers, who employ illegal fishing practices, such as pounding and crushing corals to scare fish, driving them towards the nets.