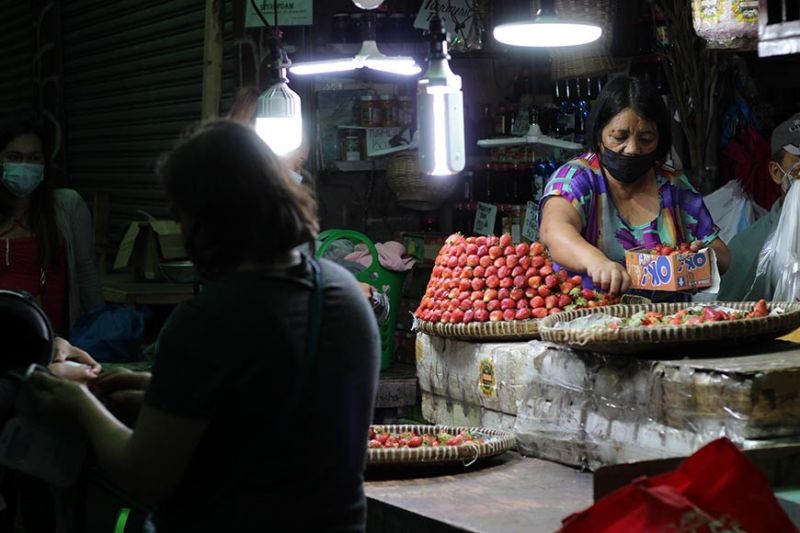 BAGUIO. A vendor sells strawberries at the Baguio Public Market at rock bottom prices since the Luzon-wide enhanced community quarantine. Transport of goods from the highlands to markets in the lowlands has been a struggle. Strawberries are being sold for as low as P100 in the public market. (Photo by Jean Nicole Cortes)

THE La Trinidad Vegetable Trading Post (LTVTP) in Benguet will undergo disinfection and sanitation as it announced its temporary closure starting Wednesday, March 25, until further notice in view of Covid-19 threat.

Mayor Romeo Salda on Tuesday through Executive Order no.11 series of 2020 ordered the partial and temporary closure of the LTVTP in Kilometer 5.

“With the difficulty of implementing social distancing at LTVTP there is no recourse but to lessen number of stakeholders in La Trinidad and transfer other stakeholders to BAPTC,” the mayor said.

La Trinidad is home to the LTVTP Inc. and the Benguet Agri-Pinoy Trading Center (BAPTC) where highland vegetables are prepared for delivery to key markets in the country.

Salda said the temporary closure seeks to disinfect and declog the area of stakeholders transacting business at the trading post.

In a separate directive, the mayor also ordered the temporary closure of all private trading areas operating in the town.

Previously, officials of the capital town submitted a position paper to Interior and Local Government Secretary Eduardo Año on the difficulty to implement crowd control and social distancing at the trading center.

DILG-Cordillera regional director Marlo Iringan, who was authorized by the Secretary to respond, addressed Salda on Monday through a letter saying “The LTVTP be closed and that only the BAPTC which has much wider area be the one to be opened,” adding the solution is feasible and will not to violate existing laws, rules and regulations.

“This is so because we were properly informed by DA-CAR and our Benguet field office that BAPTC is under-utilized facility which can actually accommodate all those who are doing business at the LTVTP. Thus, the provision of basic necessities will not be hampered in anyway by the transfer of trading operations to a wider facility,” DILG-CAR letter said.

The LTVTP was established in 1984 to boost trading of highland vegetables, spurring the economic development of the town which was hailed as the trading center for Benguet province and the Cordillera capable of supplying the entire country of fresh produce.