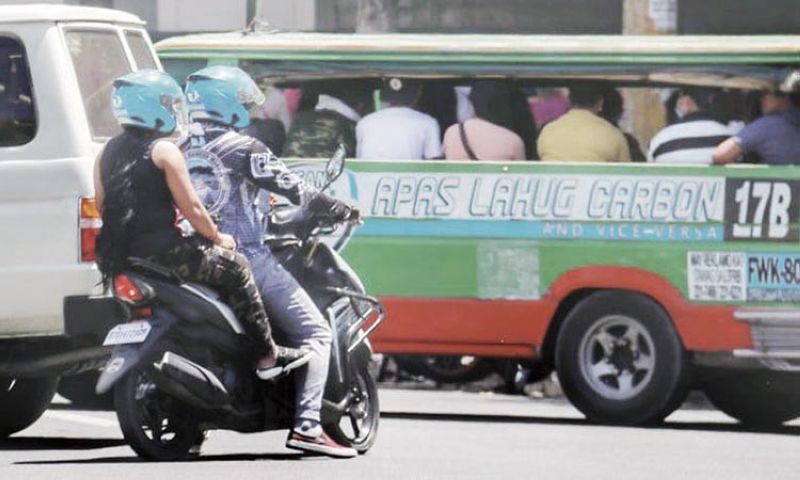 DEFIANCE. Motorists and commuters defy the social distancing policy imposed by the government to prevent the spread of the coronavirus disease in Cebu City. (Photo by Amper Campaña)

AUTHORITIES in Central Visayas flip-flopped on their decision allowing immediate relatives of private motorcycle drivers to backride -- they decided again not to allow it, adhering to the guidelines set by the Department of Transportation (DOTr) on social distancing to stop the spread of the coronavirus disease.

Motorcycle drivers with backriders, relatives or not, will be issued a temporary operator’s permit and fined P5,000. Their licenses will also be confiscated.

Land Transportation Office (LTO)-Central Visayas Director Victor Caindec told Superbalita Cebu that the violators would have a hard time getting back their licenses as most of the LTO-Central Visayas offices are closed.

He assured though that the motorcycles will not be brought to the impounding area.

In a statement issued on Wednesday, March 18, 2020, Presidential Assistant for the Visayas Michael Lloyd Dino directed LTO-Central Visayas, after a meeting with Caindec, to allow backriders of private motorcycles provided the rider is an immediate family member of the driver.

Immediate family includes the husband, wife and children who are living in the same household as the driver. The backrider was to present an identification card showing proof of his or her relationship to the driver.

However, the Office of the Presidential Assistant for the Visayas (Opav) said the decision was subject to change.

Caindec said on Tuesday, March 24, that he received calls from two assistant secretaries and an undersecretary of the DOTr and they agreed that stricter implementation had to be made when it comes to the DOTr's implementation on social distancing.

He was told that all motorcycle drivers were covered by the DOTr decision suspending the operations of the transport network vehicle service and the pilot implementation of motorcycle taxis.