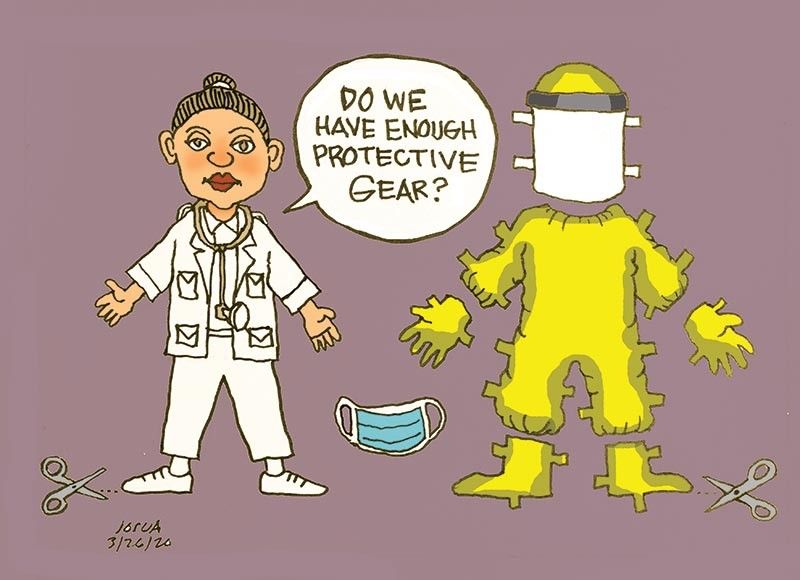 ALMOST like the stuff of dark comedy. Like doomsday parody puppets, the medical staff of St. Jude Family Hospital in Los Baños, Laguna donned cutouts of trash bags and plastic shopping bags, their DIY (do-it-yourself) version of the personal protective equipment. The image quickly spreads on social media, feeding another bout of bashing at government’s inability address the needs of our medical frontliners.

When World Health Organization representative to the Philippines Rabindra Abeyasinghe was asked if the agency recommends DIY PPEs on March 24, 2020, in a press conference, he said that although they do not recommend it, it is better than having no protection at all.

“Unfortunately, we are in a situation where there is a shortage of masks and PPE and so we have seen in many situations people using do-it-yourself kits.”

The DIY PPE’s do not guarantee a hundred percent protection, “But they will provide some degree of protection.”

Hospitals actually have a stock of PPE’s—usually a set of caps, masks, lab gowns—for staff who may be at risk of infection or are supposedly in sterile areas such as delivery (DR) and operating rooms (OR). Some PPE’s are made of materials that are reusable. They just have to undergo sterilization via autoclave machines. Autoclave machines are high-temperature, high-pressure machines used for medical sterilization.

In public hospitals, autoclaving used gloves, masks and OR gowns is common practice. However, again, only certain materials are autoclavable.

In the time of Covid-19, there is high demand for PPE’s since incoming referrals are considered potential carriers. If our front liners are using disposal PPE’s, which are expensive but are more ideal, these will have to be disposed of at the end of the day. They will be considered hazardous hospital waste.

Philippine Medical Association vice president Dr. Benito Atienza said the Philippines has enough doctors, at roughly, 120,000, excluding those working abroad. But the biggest challenge is providing them with adequate PPE’s.

The network of fabrication laboratories in the Philippines, those that became part of the Department of Trade and Industry’s project to supposedly help the sector of Micro, Small and Medium Enterprise (MSMEs), have taken initiative to mass-produce face masks to be donated to our medical frontliners. The production has been so fast with the easily replicable template.

Meanwhile, volunteers from the fashion industry are also now in the thick of mass producing head covers and masks for the frontliners. In an Instagram post, renowned fashion designer Michael Leyva shared photographs of his team in the thick of producing PPE’s. Another group called Manila Protective Gear Sewing Club is now sending out PPE sets via the Office of the Vice President

Similar initiatives are most welcome in Cebu, and must be done as quickly as possible while we are still poised for the long haul.

The Department of Foreign Affairs has confirmed on March 20 the arrival of PPE’s donated by the Chinese government.

With the Covid-19 claiming the lives of front line doctors in the capital, the Cebu community must gear up as well.