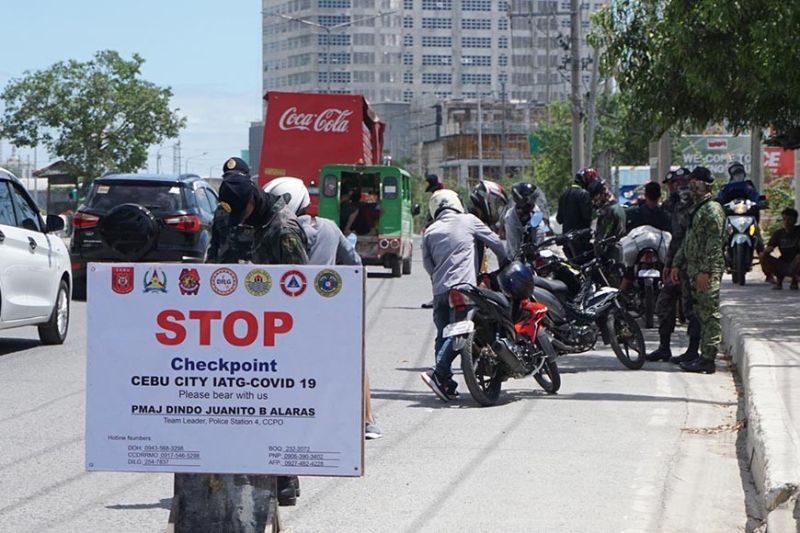 On the same day, the governor issued Executive Order (EO) 5-N placing Cebu Province under a state of enhanced community quarantine “to allow more stringent measures to be implemented in order to prevent the further spread” of the coronavirus disease 2019 (Covid-19).

Effective 12:01 a.m. Friday, March 27, the EO 5-N states: “The entry of all persons arriving on international flights in the Province of Cebu shall be prohibited; outbound passengers are still allowed to leave the Province of Cebu; there shall be no restriction on the movement of any and all cargo on any and all airports and seaports within the Province of Cebu during the period of the enhanced community quarantine. Basic and essential goods and other necessities shall be given priority over other goods; and the Philippine National Police, Armed Forces of the Philippiness, and other security forces of the Philippine Government assigned” in Cebu shall help in implementing the executive order.

EO 5-N covers 44 towns, six component cities and Mandaue City (a chartered city). It will not take effect in the cities of Cebu and Lapu-Lapu as both are independent cities.

The governor said she will call for a meeting with the local chief executives of the 44 towns and seven component cities in the province as well as Cebu City Mayor Edgardo Labella and Lapu-Lapu City Mayor Junard “Ahong” Chan on Thursday, March 26, to discuss specific measures as they gear towards the implementation of an enhanced quarantine provincewide.

In a similar move, also on Wednesday, Chan said Lapu-Lapu City will be placed under enhanced community quarantine starting on Sunday, March 29. His move came after he received a report about a “presumptive positive” case of Covid-19 in the city.

Earlier, President Rodrigo Duterte announced that local government units outside Metro Manila may also impose a localized community quarantine based on the guidelines issued by the Inter-Agency Task Force for the Management of Emerging Infectious Diseases (IATF) in a resolution that it passed on March 12.

In its resolution, the task force said a province-wide quarantine is advised when there are at least two positive Covid-19 cases from different towns within the province.

She was referring to the first patient who tested positive for Covid-19 in Cebu who is confined in Chong Hua Hospital in Mandaue City, and the “presumptive positive” case in Lapu-Lapu City.

The entry of passengers, she said, “has to stop” given the huge number of persons under monitoring who had to undergo the mandatory 14-day quarantine upon arrival in Cebu.

Garcia reiterated that the public must strictly adhere to the stay at home orders, especially those covered by the 24-hour curfew.

Garcia added that once the enhanced community quarantine is implemented, no one will be allowed to go out of their homes, except for those with “essential” work functions such as the news media.

Entry of cargo, though, will remain “unimpeded” including military flights.

Local government units are also encouraged to deploy their vehicles to augment buses ferrying passengers to the countryside. Strict social distancing, though, must be implemented.

Also on March 26, the Provincial Board will conduct a special session in view of the proposed declaration of a state of emergency in the Province of Cebu.

Cebu’s local leaders will discuss matters on public transport and the plight of the informal earners and urban poor communities, among others. Specific measures will be discussed by the local chief executives during their meeting.

In Lapu-Lapu City, Chan said he will place the entire city under an enhanced community quarantine starting at 12:01 a.m. on March 29, until further notice.

During the enhanced community quarantine, public transportation is suspended. The residents are required to stay in their houses with the exception of medical/health workers and personnel who will report for work within or outside Lapu-Lapu City.

Those who need to undergo medical checkup, treatment, or procedure are also exempted from the home quarantine provided that one member of the family/household can accompany the patient.

The purchase of basic necessities is allowed provided that they present a quarantine pass.

Non-residents of Lapu-Lapu City are also restricted to enter the city. Exempted are government officials and their staff, essential employees of the Lapu-Lapu City Government, members of the Philippine National Police, armed forces, navy, and air force; medical/health workers and personnel, members of the media, emergency rescue vehicles with their personnel, and other persons as may be exempted by the mayor.

Chan’s decision to lock down the city came after he received a report about a “presumptive positive” case of Covid-19.

A short article written in Cebuano and posted on the Facebook page of the City’s Public Information Office stated that Department of Health (DOH) 7 Director Jaime Bernadas said the city has a “presumptive positive” Covid-19 case. The sample was sent to the Research Institute for Tropical Medicine (RITM) in Pasig City for a confirmatory test.

However, in a separate press conference, Bernadas said there was no new confirmed case of Covid-19 in Cebu and other provinces of Central Visayas. The DOH central office, in its past announcements and pressers, did not use the term “presumptive positive” case.

The patient confined in Chong Hua Hospital in Mandaue City is still the only confirmed Covid-19 case in Cebu, said Bernadas.

Nine samples from Vicente Sotto Memorial Medical Center (VSMMC) were sent to the RITM for confirmatory tests. Of the samples, six were from Cebu City, one from Lapu-Lapu City (the “presumptive positive” case) and one from Mandaue City. The last sample was that of the first Covid-19 patient for repeat examination.

Bernadas said the VSMMC testing center already conducted a total of 81 tests in its first two rounds of testing. A total of 72 samples tested negative.

On Wednesday, the DOH central office reported that three more patients with Covid-19 have died, bringing the country’s death toll from the pandemic to 38.

The agency also said 84 additional cases have been confirmed while six patients have recovered. The total Covid-19 count in the country is now 636, with 26 recoveries, as of 4 p.m. Wednesday.