Coronavirus death toll rises to 45, cases go up to 707 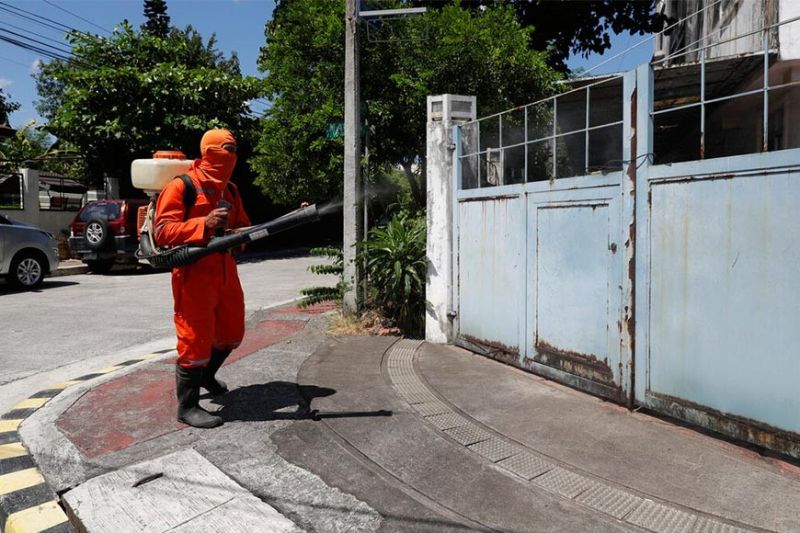 A village worker wearing a protective suit uses a machine to spray disinfectants inside a village as a precautionary measure to prevent the spread of the new coronavirus in Metro Manila, Philippines on Thursday, March 26, 2020. The new coronavirus causes mild or moderate symptoms for most people, but for some, especially older adults and people with existing health problems, it can cause more severe illness or death. (AP Photo/Aaron Favila)

FIVE more Filipino men, mostly middle-aged, and two elderly women were listed as the latest mortalities from the coronavirus disease, bringing the death toll in the Philippines to 45 as of Thursday, March 26.

The Department of Health (DOH) said it has also recorded 71 new confirmed cases, taking the total count to 707 as of 4 p.m. Thursday. Two more patients have recovered.

PH278 died on March 25, 9 a.m., of septic shock, severe pneumonia and Covid-19. She had hypertension and stage 1 colon cancer. She was from San Juan City and had no exposure to an infected person, but was confirmed positive five days before her death.

PH354 died on March 13, 5:20 p.m., but was confirmed positive only on March 20. It was not known whether she had traveled or had exposure to an infected person. Cause of death was listed as acute coronary syndrome/congestive heart failure and severe acute respiratory infection.

PH540 was a 50-year-old diabetic Filipino male from Pasig City. He died on March 20, 5:55 p.m., of acute respiratory failure, but infection was confirmed only on March 24. He was diagnosed with pneumonia.

PH636 was 56 years old, male, from Pampanga. Aside from having no travel history, he also had no exposure to an infected person. He expired on March 24, 6:37 p.m., but was confirmed positive for Covid-19 only on March 25. Cause of death was acute respiratory distress syndrome secondary to Covid-19. He had pre-existing hypertension.

PH600 was a Filipino male from Sultan Kudarat, 87 years old. He died on March 14, 5:55 a.m., but was confirmed positive for Covid-19 only on March 24, or 10 days later. Cause of death was acute respiratory failure secondary to chronic obstructive pulmonary disease on top of Covid-19.

PH327, a 46-year-old Filipino male from Laguna, died on March 15, but infection was confirmed only on March 21. He died of acute myocardial infarction. He had no travel history. He was hypertensive and had renal disease.

PH321 was also male and 46 years old. He was from Rizal and had no travel nor exposure history. He died on March 23, 1:03 p.m., two days after he was confirmed positive for Covid-19 on March 21. He died from acute respiratory disease and pneumonia caused by Covid-19. He was hypertensive.

Meanwhile, the DOH said PH112 and PH28, both Filipino male, have recovered.

PH112 is 41 years old and is from Makati City. HIs symptoms started on March 6 and infection was confirmed on March 14. He was discharged on March 21.

PH28, 69 years old, is from Marikina City. He developed symptoms on February 29 and was confirmed positive on March 10. He was discharged on March 22.