Whole Cebu in 'lockdown' by Monday 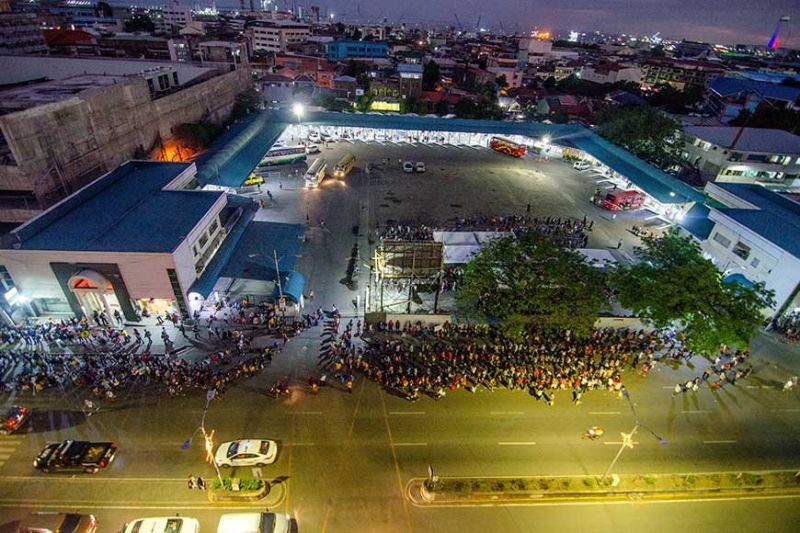 STRANDED DUE TO SOCIAL DISTANCING. The impending lockdown or imposition of an enhanced community quarantine (ECQ) had people scrambling for groceries and a ride home Thursday, March 26, 2020. Because public conveyance has to observe social distancing and allows only 50 percent capacity, hundreds of commuters got stranded outside the Cebu South Bus Terminal. As if things couldn’t get worse for them, it rained and they got drenched as they clung to their grocery bags. Public transportation in Cebu City will be suspended starting noon of Saturday, March 28, 2020. (SunStar Photo / Alan Tangcawan)

BY MONDAY, March 30, 2020, the whole of Cebu will be under a state of enhanced community quarantine (ECQ).

The cities of Mandaue, Talisay and the rest of the province will follow suit after the stroke of midnight Monday.

The purpose of the ECQ is to limit the number of people out on the streets.

After noon Saturday, all Cebu City residents cannot leave their homes except:

• One member of the household who will purchase basic necessities;

• Drivers and personnel of delivery vehicles of all types of cargoes;

• Persons who seek medical attention or who are already admitted on any medical facility, provided that only one companion shall be allowed;

• And such other persons as may be authorized by the mayor.

The Armed Forces of the Philippines (AFP), the Philippine National Police (PNP) and other law enforcement agencies are directed to ensure compliance.

City Councilor Dave Tumulak, who heads the border line control task force, urged the public who live outside the city, to leave for their hometowns before the Saturday deadline.

Tumulak said the city's 14 borders will be strictly monitored to regulate entry of people.

According to the city official, the people allowed in are:

• Those who provide medical services;

• Employees of pharmacies and drug stores;

• Delivery personnel of cargoes - with or without load;

• Employees working at manufacturing establishments engaged in the production and distribution of food, essential and hygiene products, medicines and vitamins, medical products such as personal protective equipment, masks, gloves and others;

• Heads of mission or their foreign mission representatives.

Other authorized persons allowed to enter and exit the city are officials and representatives of the national government; Ombudsman and Deputy Ombudsman; justices of Supreme Court and Court of Appeals; judges of the regional, metropolitan, city and municipal trial courts and prosecutors; provincial governor, vice governor, members of the Provincial Board, Provincial Capitol employees and officials; local government officials; media personalities, such other persons determined by the mayor or of his duly authorized representative.

In the implementation of the ECQ, no vehicle is allowed to enter or exit Cebu City, excluding:

• Vehicles carrying persons allowed to enter and exit the city;

• Emergency vehicles such as ambulances, fire trucks and the like; vehicles of the AFP and the PNP);

• Vehicles determined by the mayor or his duly representative.

The City Government, though, will provide transportation for frontliners, health and medical workers, workers in exempted establishments in the city from 5 a.m. to 8 p.m.

Bona fide identification cards issued by their respective agencies shall be sufficient for movement around the contained area until such time that such accreditation orders shall have been issued by the agency concerned.

The restriction of land and sea travel exclude:

• Law enforcement personnel, including the police, military and force multipliers;

• Persons working in the above mentioned exempted establishments;

• Workers attending to installation, construction and/or repair of public utilities and/or road construction;

• Delivery services, whether in-house or outsourced, transporting food, medicine, and other basic necessities;

• Vehicles authorized by the mayor or of his duly authorized representative.

Business establishments in Cebu City that will remain open during the whole duration of the ECQ are:

The following establishments will be allowed to operate but only up until 8 p.m.:

• Food establishments, provided that there shall be no dine-in customers and only take out orders or delivery services are allowed;

• Dealers or suppliers of agricultural products, LPG and other petroleum products, medical supplies and veterinary supplies;

These establishments are also directed to conduct temperature check before allowing customers to enter their premises.

The management of the establishments should also require their employees to wear protective masks and proper equipment.

They are also encouraged to provide alcohol and/sanitizers and keep hand washing stations within their premises.

The employees should directly go home after their shift.

The mayor has also the right to authorize other establishments to operate as he may deem fit and necessary.

All BPO and KPO and export-oriented industries may remain operational, provided they implement business contingency measures.

All the borders in the city will be installed with personnel of the AFP, PNP, Cebu City Transportation Office, City Disaster Risk Reduction and Management Office and the concerned barangay.

The said personnel will have to wear their respective uniform and ID.

The checkpoints will operate 24 hours.

The Business Permit and Licensing Office and the Prevention, Restoration, Order, Beautification and Enhancement are also part of the implementing offices of the ECQ.

Barangay officials are also mandated to implement such order in coordination with law enforcement agencies.

Lapu-Lapu City sent a copy of Mayor Junard Chan's executive order (EO) on the ECQ with the guidelines. The EO has been posted on SunStar Cebu Facebook page: snstr.co/8zo.

In Mandaue City, Mayor Jonas Cortes has yet to release a copy of the guidelines on his EO on the ECQ.

Tirado said the Mandaue City Hospital will only cater to Covid-19-related cases, including those identified with moderate symptoms such as individuals with influenza-like illness. However, it will still accommodate out-patients for consultation.

Meanwhile, Gov. Gwendolyn Garcia announced that the whole province will be in a state of ECQ on Monday, March 30.

She said she and other local chief executives agreed on the date after a meeting Thursday afternoon, March 26.

She said this will allow the public to return to their hometowns and buy food and other essential goods. This will also give local government units (LGUs) time to distribute quarantine passes that will allow one member of each household to leave the house and go on supply runs.

Everyone living in the 44 towns and seven cities under the Provincial Government will not be allowed to leave their houses.

However, there are exceptions, including:

• Drivers and delivery boys that bring in supplies and other essential goods.

All establishments will be closed to the public, except:

During this period, there will be no public transportation.

The governor clarified that Cebu Province under a state of ECQ does not mean the government will provide all the people's needs, especially food.

She said the Province will prioritze those who need assistance the most.

“I told the mayors, 'let us reserve assistance for the poor and helpless.' Those who can afford should not be included,” Garcia said in Cebuano.

Garcia said each LGU will distribute one quarantine pass for every household. Those who are renting bed spacers or living in dormitories will be eligible.

However, Garcia said the quarantine pass can only be used within the jurisdiction of the issuing LGU.

She directed the public to report to her anyone charging for the pass since this is free of charge.

During the 24-hour curfew, drinking outside the house will not be allowed.

As of 4 p.m. Thursday, March 26, five more Filipino men, mostly middle-aged, and two elderly women were listed as the latest mortalities from the coronavirus disease, bringing the death toll in the country to 45.

Only one of the seven mortalities had a travel history. The oldest was 87 years old, while the youngest was 46. Majority of them had a preexisting medical condition.

Angara, in a statement Thursday, March 26, assured that he has not been in contact with the public since taking the test on March 16.

In a separate statement, Isabela Rep. Antonio “Tonypet” Albano said he has gone into self-quarantine after learning that another colleague has the new coronavirus.

"We bravely went to work and two of our congressmen are now positive with Covid-19, two congressional staff have died, many more are PUIs and PUMs," Albano said.