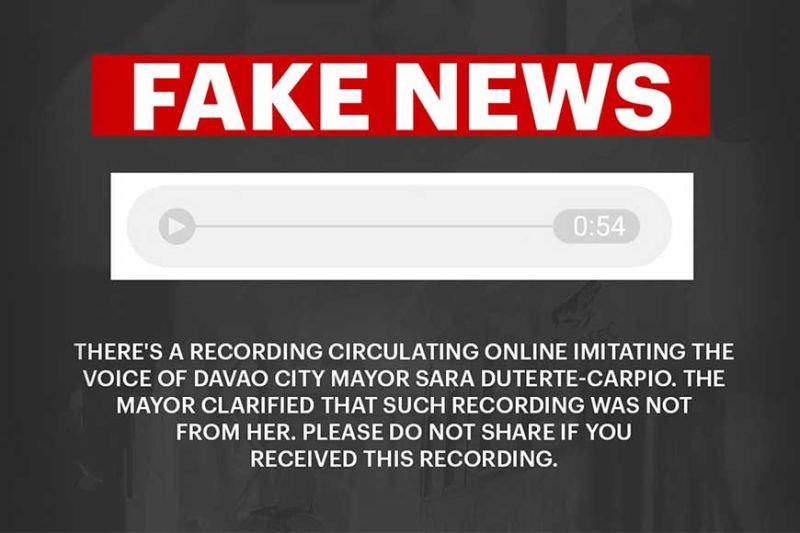 Duterte-Carpio said on Friday, March 27, that she had been personally receiving screenshots and chain messages from unvalidated sources of announcements that allegedly came from her.

On Thursday evening, March 26, a voice recording imitating the voice of the mayor, circulated on chat messaging apps, saying that the public should now be hiding in their respective houses as there are now local transmissions in the city.

The mayor, through the City Information Office (CIO), immediately issued a clarification saying that it was not her voice.

On Friday, Duterte-Carpio said via 87.5 FM Davao City Disaster Radio reiterated her clarification, saying she does not share or warn the public through chain messages. She also said she does not send firsthand information to her friends or relatives online, which implies that the leaked messages have been sent to some of her close contacts.

“Please lang ha. Palihog lang ha. Dili ing-ana akoang accent. Kadungog mo sa iyang acccent? Kagaba! (That is not my accent. Have you noticed her accent?),” the mayor said in a radio interview.

She added, “I do not give advantage to my friends about information. Kung naa ko’y information, ginahatag ko na directly sa atoang radio program (If I am going to give any information, I would be directly announcing it on our radio station (Disaster Radio])”.

She urged the public to stop sending and re-sending the voice message.

The mayor, during the radio interview, also denied circulating text messages of an early curfew in the city.

According to her the text message, which sounds like the mayor had made the mandate during a recent face-to-face meeting, is a hoax.

Duterte-Carpio clarified she only conducts meetings via chat messaging.

“Basin kani nga ‘mayor’ dili ako ang ginapasabot ani (Maybe the mayor in the circulating text message does not refer to me),” she said, adding that while Davao Region has a unified curfew, other local government units start their curfew as early as 8 p.m.

The mayor also warned about memes that have been circulating online, where edited mockery verbatim posts are attributed to her.

The mayor admitted misinformation has been a struggle, not only for the local government, but also for the national government.

When in doubt, the mayor said, take a screenshot of the post and immediately report it to concerned agencies.

Duterte-Carpio reiterated that firsthand information or executive orders will only be posted by the CIO through its Facebook pages namely: City Government of Davao, Davao City Reports, and Davao City Disaster Radio (the city government’s official radio station).

All of her radio interviews, she said, is available via livestream posted on Disaster Radio’s page.

Gascon was then forgiven by Ilang barangay kagawad Lito Padilla after the two had a face to face encounter on Tuesday, March 24, at Bunawan Police Station.

Under the law recently signed by President Rodrigo Duterte granting him additional powers to fight the coronavirus disease, a person or group spreading false information shall be punishable with imprisonment of a two-month jail sentence or a fine of P10,000 to one million or both.

In section 6 (f), violators of this law are those perpetrating, or spreading false information regarding Covid-19 crisis on social media and other platforms, such information having no valid or beneficial effect on the population, and are clearly geared to promote chaos, panic, anarchy, fear, or confusion; and those participating in cyber incidents that make use or take advantage of the current crisis situation to prey on the public through scams, phishing, fraudulent emails, or other similar acts. (With reports from Juliet C. Revita)