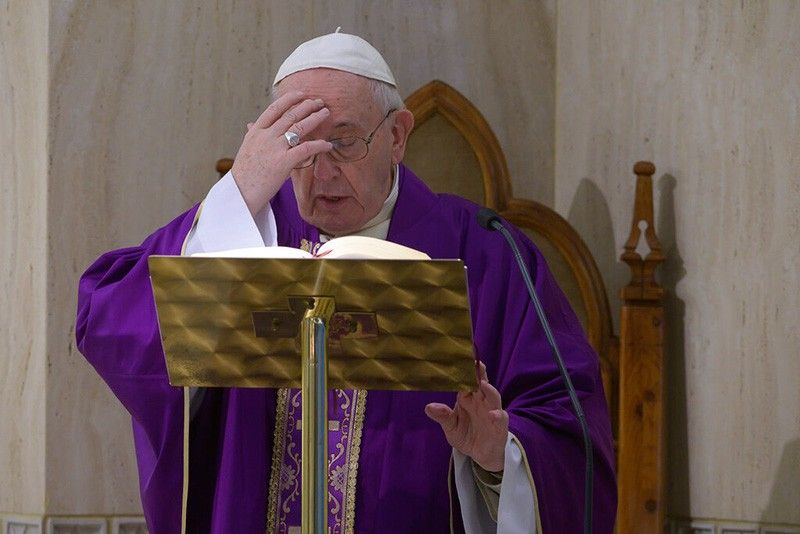 VATICAN. Pope Francis celebrates Mass at his Santa Marta residence, at the Vatican, Friday, March 27, 2020. The new coronavirus causes mild or moderate symptoms for most people, but for some, especially older adults and people with existing health problems, it can cause more severe illness or death. (Vatican News via AP)

VATICAN CITY -- Pope Francis will celebrate Holy Week ceremonies in the confines of Vatican City, including a Good Friday Way of the Cross service on the steps of St. Peter’s Basilica instead of at Rome’s Colosseum as customary.

Because of the Covid-19 pandemic, the Vatican on Friday announced that Francis will celebrate Mass for Palm Sunday, Holy Thursday, and Easter vigil and Easter Sunday — April 12 — all at the basilica’s central altar.

Later Friday, March 27, the pope was set to lead a special prayer in an otherwise empty St. Peter’s Square and then deliver an extraordinary blessing, usually reserved only for Easter and Christmas.

Before the pandemic, putting Italy and many other countries under national lockdown and severely limiting people’s movements in public, tens of thousands of faithful would have crowded the square on Palm Sunday for an outdoor Mass celebrated by the pontiff.

Good Friday’s candlelit procession at Rome’s ancient Colosseum traditionally draws big crowds of tourists, pilgrims and Romans. But weeks ago, both tourists and pilgrims disappeared from Italy amid fears of virus contagion and, later, by local and national decree.

Italy’s outbreak includes the world’s highest total of dead for a single nation.

Covid-19 can cause mild or moderate symptoms, like fever and cough. But a small percentage of sufferers are hospitalized with pneumonia in intensive care.

The Holy See has confirmed four cases of Covid-19 in the tiny independent city state in the middle of Rome.

It has declined to say if Francis, 83, who a few weeks ago had a cold, has been tested for Covid-19, and if so, what the result was. Among the Vatican’s confirmed cases is an Italian prelate who lives at a Vatican hotel where Francis resides. (AP)