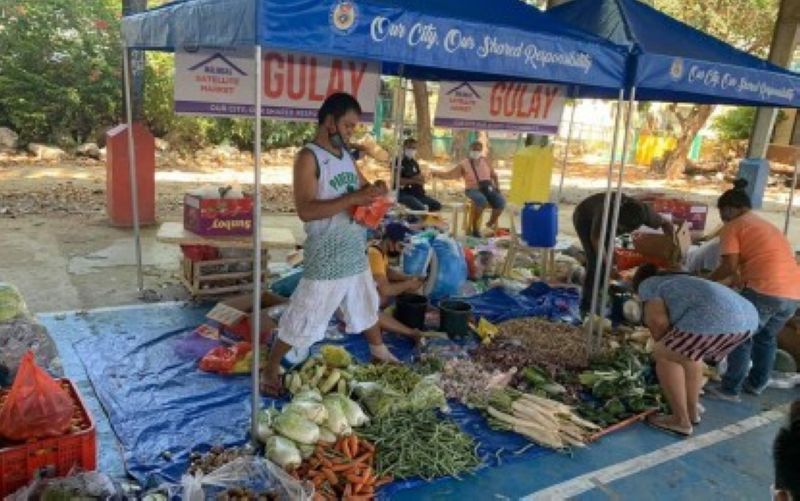 PANGASINAN. Dagupan City Government starts its satellite market at Barangay Bolosan Dagupan City for the residents in the eastern part of the city on March 26, 2020. Social distancing, disinfection of the area, among other protocols, are followed to ensure the safety of the residents against the coronavirus disease 2019. (PNA)

THE local government unit (LGUs) in Dagupan, Pangasinan and Sual, Lingayen, Bugallon and Bayambang towns have adopted a satellite mobile market scheme to prevent their constituents from overcrowding public markets amid the coronavirus disease (Covid-19) crisis.

Dagupan City is the first to launch the satellite market, particularly for its eastern barangays, on Thursday, March 26.

“Mayor Brian Lim thought of setting up the satellite market as one of the city government’s social distancing measures to prevent the possible spread of the Covid-19. With the satellite market, eastern barangay residents did not have to travel to downtown Dagupan,” the city’s Public Information Office (PIO) said.

In a letter dated March 25, Lim invited owners and operators of supermarkets, groceries, and convenience stores to put up rolling stores and sell basic commodities in the different barangays, subject to rules and regulations provided by the national and local governments.

In a radio interview Friday, March 27, Lim said the City Government is also coordinating with pharmaceutical companies to sell medicines at the satellite market.

The Municipal Government of Lingayen also placed a mobile market for its residents in Barangay Libsong West, which is now under extreme enhanced community quarantine following the death of a patient under investigation who is waiting for the Covid-19 result.

The town’s Municipal Information Office reported on its Facebook page that the mobile market was placed at the entrance and exit point of the barangay, and the residents were asked to observe social distancing while buying goods.

On his Facebook page, Mayor Liseldo “Dong” Calugay announced on Thursday that the residents need not go to the town proper as the municipal government will bring the mobile market to the interior barangays.

He also asked for suggestions or comments on how to provide better services to their constituents.

The Municipal Government of Bayambang started its mobile market on Friday.

The barangays are clustered into districts for the schedule of the mobile market in their areas.

“The mobile market aims to bring the needs of the people, especially those under total lockdown, to them to prevent them from overcrowding the public market and to limit the movement of people outside of their homes,” the Balon Bayambang official Facebook page post read.

Some barangays in Bayambang were placed under total lockdown as the first case for Covid-19 was recorded in the town.

“The vendors will go (to) the barangays to sell their products. The market schedule will still be followed and the satellite market will be at the covered courts. A dry-run was held in some barangays to see how it works,” she said.

Meanwhile, Malasiqui town Mayor Noel Anthony Geslani, in his Executive Order No. 09, highly encouraged barangay and Sangguniang Kabataan officials to put up one mini retailing or satellite market in their respective communities.

But peddling or selling of goods from place to place will not be allowed to reduce the possibility of virus transmission, he said.

Two Covid-19 patients in the province are from Malasiqui town and are admitted at the Pangasinan Provincial Hospital in San Carlos City. (PNA)