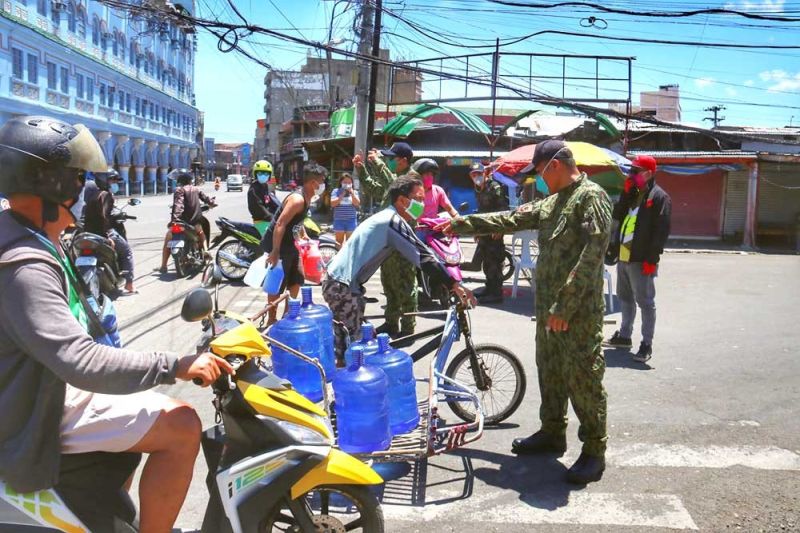 PRECAUTIONARY MEASURE. A trisikad driver gets his temperature checked before entering the Carbon Public Market in Cebu City, which was placed under a state of enhanced community quarantine on Saturday, March 28, 2020, to prevent the spread of the coronavirus disease 2019. The first day of implementation was marred by residents who were not aware of or ignored the restrictions under the policy and enforcers who did not fully grasp the provisions of the mayor’s executive order. (SUNSTAR FOTO / AMPER CAMPAÑA)

“I AM now considering Cebu City as the epicenter of the virus in the Province (of Cebu).”

So said Gov. Gwendolyn Garcia, who stood pat on her directive to impose strict movement limitations given the increasing number of positive cases of the coronavirus disease 2019 (Covid-19) in Cebu City.

The governor on Sunday, March 29, 2020, explained in detail contents of Executive Order (EO) 5-O, which provides protocols and guidelines to be observed within the 44 towns and seven cities of the Province of Cebu while under an enhanced community quarantine (ECQ), which started at 12:01 a.m. Monday, March 30.

In her regular news conference, Garcia stressed the need to strictly restrict movement and limit entry and exit in the province in a bid to counter the Covid-29 pandemic.

“While we can still implement such containment measures, let’s do it. We don’t want the situation to spiral out of control as you are already seeing in so many European countries and even in the United States. Cebuanos are used to the lack of border control and border restrictions,” Garcia said in a mix of Cebuano and English. “I don’t want that to happen to our province. We will have to institute these measures. That’s why I took the initiative. That’s why we are strict about people leaving Cebu City because the number of Covid-19 cases there is rising.”

The governor reiterated the need for all Cebuanos to cooperate and to stay at home as the “faceless, invisible enemy” wreaks havoc on a global scale.

She said the movement restrictions are not meant to make life difficult for Cebuanos.

“These measures are to ensure that you will still have a life to live when this is over. Face it, life is not normal anymore. Life as you knew it, the carefree and easy life that we knew is not here anymore. These are extraordinary, abnormal times,” Garcia said.

Garcia also called out Mactan-Cebu International Airport Authority (MCIAA) general manager Steve Dicdican for allowing 38 foreign passengers aboard chartered flights from Manila, Siquijor, Butuan and Caticlan that were arranged by their embassies to disembark in Cebu.

The foreigners are reportedly staying in two hotels here.

Effective 12:01 a.m. Friday, March 27, the EO 5-N states: “The entry of all persons arriving on international flights in the Province of Cebu shall be prohibited; outbound passengers are still allowed to leave the Province of Cebu; there shall be no restriction on the movement of any and all cargo on any and all airports and seaports within the Province of Cebu during the period of the enhanced community quarantine. Basic and essential goods and other necessities shall be given priority over other goods; and the Philippine National Police (PNP), Armed Forces of the Philippines and other security forces of the Philippine Government assigned in Cebu shall help in implementing the executive order.”

The governor said the MCIAA did not coordinate with the Province regarding the arrival of the foreigners.

Cordova Mayor Mary Therese Sitoy-Cho had brought up the matter during a meeting with the governor and local chief executives after her constituents raised concerns regarding the busload full of foreigners in their town.

“Stop victimizing Cebu. I hope this will be the last. Cebu has become the dumping ground for all these passengers when there are other airports,” Garcia said.

Dicdican, for his part, said: “We are supposed to be doing the whole-of-government approach, but that cannot happen if LGUs (local government units) arrogate the jurisdiction and authority reserved for the National Government. We should all be cognizant of our boundaries for there to be effective collaboration.”

Based on the situational report on Covid-19 issued by the Department of Health in Central Visayas (DOH 7) on Sunday, March 29, the region had 25 Covid-19 patients.

Of the number, 19 are admitted, one recovered and five died.

Of those who died, two were from Negros Oriental and three were from Cebu City.

The DOH 7 also recorded a total of 206 persons with severe acute respiratory infection; 1,319 persons with influenza-like illnesses; and 17,105 persons under monitoring.

Meanwhile, Cebu City Councilor Raymond Alvin Garcia described as successful the first day of the ECQ in the city, which was implemented at noon on Saturday, March 28.

He said some residents were not aware of the restrictions of the ECQ, while some enforcers did grasp fully the provisions of Mayor Edgardo Labella’s EO.

“There are still things, which have not been fully understood. It’s a natural thing,” he said.

Garcia said the public and the enforcers still have a few days before the ECQ will be strictly implemented on Wednesday, April 1.

Cebu City Police Office Director Col. Hector Grijaldo said the first day of the ECQ was peaceful and no major crime was reported.

Health checkpoints were set up at the city’s 14 borders, he said.

Grijaldo urged the public to stay at home if they don’t have important business outside to avoid getting infected.

The Cebu City Government has also developed an application designed to make it easier to apply for an ECQ pass.

An applicant logs in to the PassApp.ph website and registers as a “Household.” The screen will show a form that the applicant will fill out, after which an eight-digit pass code will be provided. The applicant will inform the barangay so a barangay representative can verify the pass code. Once verified, the household will be issued a green pass, which is for residents of the city only.

City Administator Floro Casas Jr. said the public can also apply manually since barangay officials, members of the PNP and other authorized individuals will conduct house-to-house visits to distribute passes. (RTF / WBS WITH A REPORT FROM JOB / JJL / PAC)