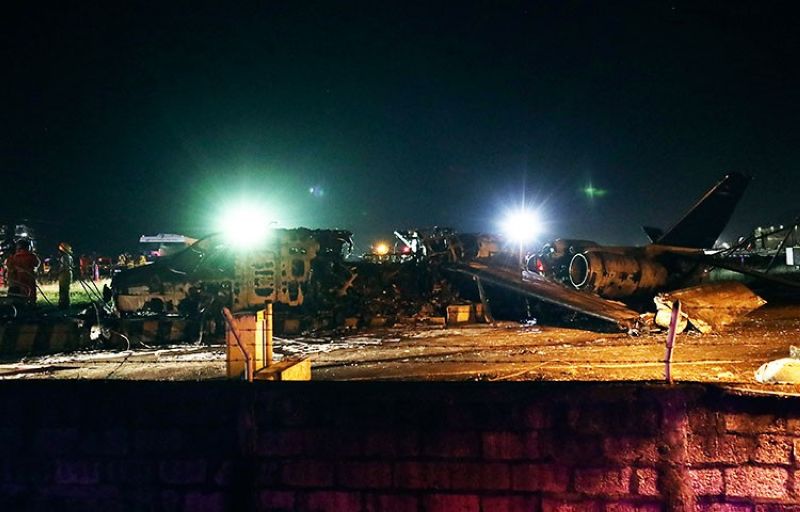 MANILA. Firemen and rescuers stand beside the remains of a Lionair, West Wind 24 aircraft after it caught fire during take off at Manila's International Airport in Philippines on Sunday, March 29, 2020. (AP)

THE air crash investigation involving a Lionair medical evacuation flight is seen to take at least six months to one year, the Civil Aviation Authority of the Philippines (CAAP) said on Monday, March 30.

CAAP spokesperson Erik Apolonio said they will be tapping the expertise of air crash investigators from other countries such as Japan, Singapore or Australia.

He said, however, that the results of their initial investigation will be released within the day. The crash was the second involving a Lionair aircraft in about six months.

The CAAP earlier said a Westwind aircraft owned and operated by charter service company Lionair Inc. (not the Lion Air of Indonesia) burst into flames and exploded while taking off at the Ninoy Aquino International Airport (Naia) Sunday evening, March 29, 2020.

Eight persons were killed - one flight medic, one nurse, one doctor, three flight crew (two pilots and one crew), one patient and one assisting the patient.

Apolonio said two of the passengers were foreign nationals—a Canadian and an American.

The plane was bound for Haneda Airport in Tokyo, Japan for a medical evacuation mission.

The crash occurred around six months after a Lionair flight on a medical evacuation mission also went down in Calamba, Laguna. Nine persons were killed in that September 2019 flight.

CAAP Deputy Director General for Operations Donald Mendoza said on Sunday that they were studying the possibility of grounding the Lionair fleet following the two crashes.

As of Monday morning, the Naia runway has been cleared of the wreckage and operations have normalized. (SunStar Philippines)