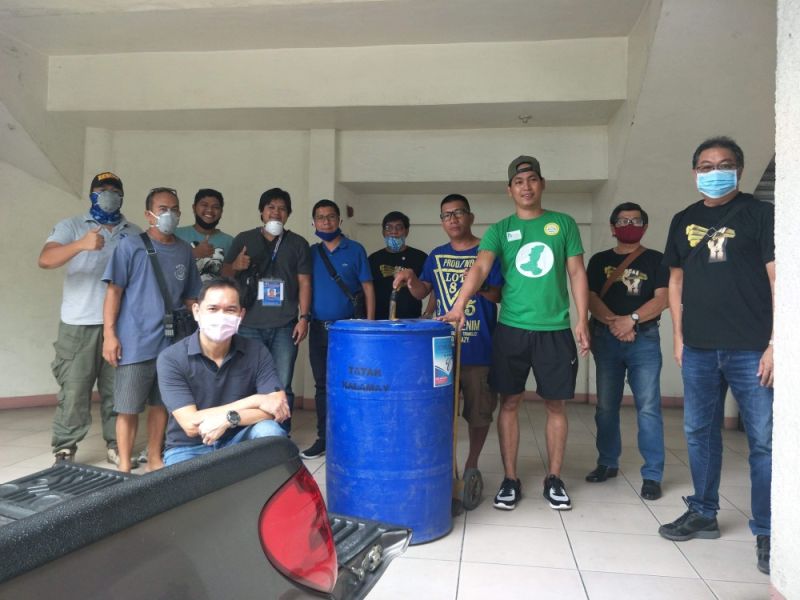 BACOLOD. Members of Tatak Kalamay during their distribution of alcohol in the province over the weekend. (Contributed photo)

THE Tatak Kalamay joins the coronavirus disease (Covid-19) war by distributing over P1 million worth of alcohol in all local government units (LGUs) in Negros Occidental, key sugar-producing municipalities in Batangas province, and Covid-designate hospitals and other government agencies over the weekend.

The Tatak Kalamay is a multi-sector composed of sugar industry stakeholders in the country.

Its spokesperson Dave Alba, in a press release, said they saw the need on how key sugar industry players can help during this crisis by providing the much-needed ethyl alcohol to health facilities and the government's frontliners.

For his part, member Gerard Joseph Sarrosa said "this crisis must be everyone's concern and we in the sugar industry are one in throwing our full support to Negros Occidental in their directive to implement the Enhanced Community Quarantine in order to contain the spread of Covid-19 in our localities."

Sarrosa added that we need to "remain steadfast during these times and e urge everyone to cooperate with our local government units."

Each town and municipalities in Negros Occidental were provided a drum containing 200 liters of alcohol, while the Corazon Locsin Montelibano Memorial Hospital in Bacolod City, which has been identified as the Covid-19 designate health facility, received two drums.

Tatak Kalamay also distributed alcohol in Batangas province in partnership with Luzonfed and Progreen to the 10 municipalities and the cities of Lipa, Tanauan and Balayan. (PR)