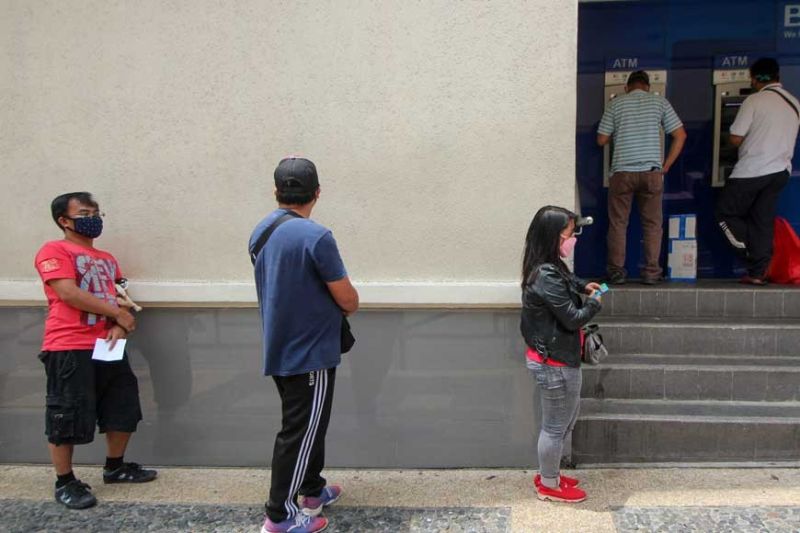 BAGUIO. While waiting in line for their turn to use the ATM, customers follow social distancing guidelines. (Photo by Jean Nicole Cortes)

A P150-million emergency fund was approved by members of the Baguio City Council for the Covid–19 pandemic.

“This will be used for whatever purpose we may see fit to help our city in this situation,” Olowan said.

The funding was identified by Baguio Mayor Benjamin Magalong with the request immediately forwarded to the city legislators who in turn, approved the amount.

Olowan said the list of expenses will again be given to the City Council to approve and review before any release is made to make sure plans and programs are in unison.

The amount is readily available and will serve as a standby fund for the city to use in dealing with the health pandemic.

Magalong said the request for supplemental budget is needed as operating cost for city expenses in the time of Covid–19 amounts to almost P4 million a week.

A bulk of the amount goes to provisions of food packs, emergency equipment and other needs the government responds to for city.

Magalong sees at least P18 to 20 million in expenses a month during the time of the enhanced community quarantine.

The mayor admitted he is expecting longer community quarantine for the city than the announced April 14 schedule.

“To be honest, I don’t think it will be over in a month, even assuming that we have favorable developments in Baguio, looking at what is happening in Manila... maski two months I’m not optimistic about it, probably three or in four months baka 70% matapos natin,” he added.

Magalong said there are areas where lax implementation of the enhanced community quarantine is being done, lamenting some areas seem not to care to follow rules.

“Madami pa lugar na wala paki alam, there are a lot of issues now coming in, the health sector... na complicate na situation natin, we have prepared a lot of things but marami pa kailangan i-address,” the mayor said.