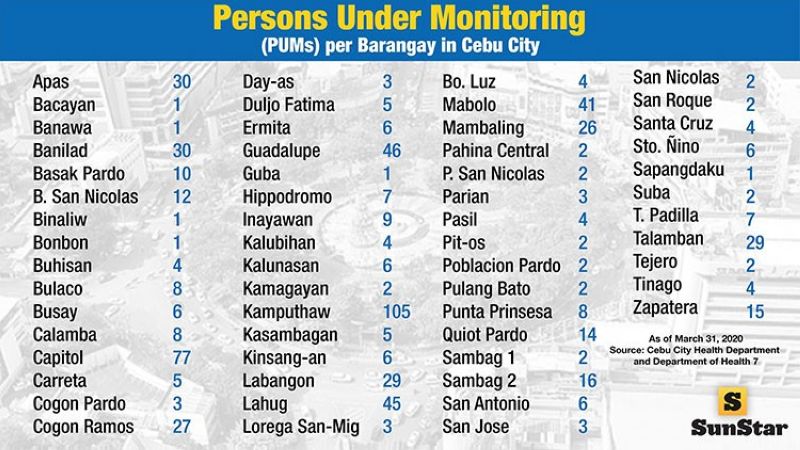 THERE were no new coronavirus disease 2019 (Covid-19) cases in Central Visayas on Tuesday, March 31, 2020 but on Monday night, March 30, in Cebu City, another life was lost to Covid-19, the Department of Health (DOH) 7 reports.

One of Cebu’s top oncologists, Dr. Dennis Ramon M. Tudtud, 68, of Talamban, Cebu City, a former president of the Philippine Society of Medical Oncology, passed away just three days after the death of his wife, pathologist Helen Evangelista-Tudtud, and hours before their son’s birthday.

Dr. Helen, 66, died of Covid-19 late Friday evening, March 27, or 11 days after she was admitted to Perpetual Succour Hospital in Cebu City.

“Today is my birthday. It pains me that both my parents are no longer here. I cannot bring them back to life but I can celebrate their lives,” the couple’s son, Dennis Thomas “DJ” Tudtud said in a Facebook post on Tuesday.

Both active members of the Brotherhood of Christian Businessmen and Professionals (BCBP), a charismatic group, the Tudtuds were known for their kindness and generosity extending services for free and even buying medicines for patients.

“He has always put others before himself. As a father, he gave us everything we needed and wanted.

He worked so hard for us. He was happy when he saw us happy. He did everything to put smiles on our faces. He adored my mother. He would give the world to Mommy Helen if it was possible,” said the younger Tudtud.

“His selflessness did not stop in our home. As a doctor, he would even pay for the chemotherapy sessions of some of his patients just so their families could spend more years with them. He was generous beyond words could even describe,” DJ said.

“Please include them in your prayers as they journey together to heaven. Please also pray for those who are still fighting this battle. My parents may have lost but the Lord won two angels,” he added.

Of the total cases, 20 are from Cebu City; four from Negros Oriental; two from Cebu Province; two from Lapu-Lapu City; one from Mandaue City, and one from Bohol.

A patient from Bohol recovered while 22 of the cases are admitted in various hospitals.

The DOH 7 through the Vicente Sotto Memorial Medical Center sub-national laboratory released an additional 25 test results as of 5 p.m., Tuesday. All were negative for Covid-19.

Meanwhile, the number of confirmed Covid-19 cases in the country surged past 2,000, while mortalities increased to 88, with 10 more deaths reported by DOH in the last 24 hours.

As of 4 p.m. Tuesday, DOH Assistant Secretary Maria Rosario Vergeire announced they have confirmed an additional 538 cases, bringing the total count to 2,084.

This was the highest number of cases recorded over 24 hours mainly because of the availability of test kits and the accreditation of sub-national laboratories that have been allowed to release test results, Vergeire said.

As of March 30, the DOH said a total of 15,337 tests have been conducted in the country. The number includes retests and validation tests as well as the 1,336 tests conducted by accredited sub-national laboratories.

Seven Covid-19 patients have recovered, bringing the total number of recoveries to 49.

Of the 10 additional mortalities recorded by DOH, eight were male and two were female.

Only Patient (PH) 1680, a 51-year-old Filipino female from Rizal, had no pre-existing medical condition. Travel history was unknown. She died on March 24, but infection was confirmed on March 25.

The nine others had comorbidities such as hypertension and diabetes mellitus. Six were elderly, aged 69 to 89.

Of the seven who recovered, six are male and one is female. Only two, PH258 and PH96 had a travel history.

The DOH appeals to the public to help prevent the spread of Covid-19 by heeding government guidelines and protocols and staying at home. (WBS, LMY, JTM, SunStar Philippines)