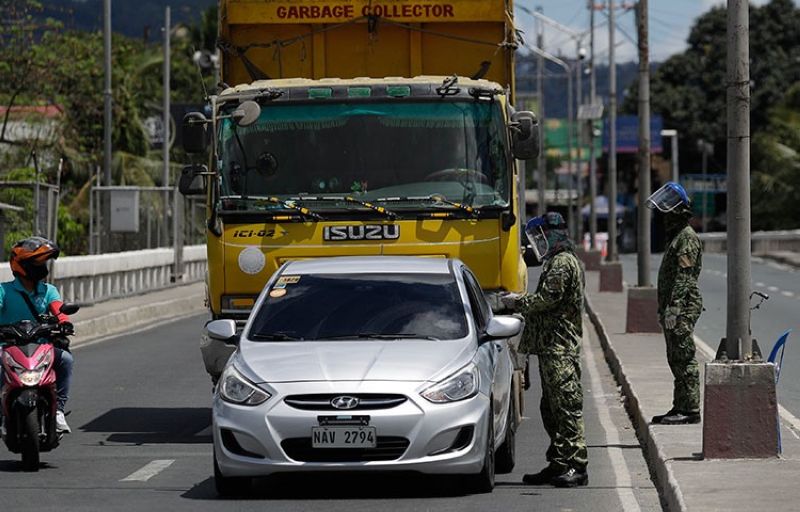 MANILA. Police wearing protective face masks inspect vehicles at a checkpoint during a community quarantine to help curb the spread of the new coronavirus in Manila, Philippines on Wednesday, April 1, 2020. (AP)

THE Philippine National Police (PNP) on Wednesday, April 1, reiterated that no barangay checkpoints should be established on major thoroughfares and highways.

Lieutenant General Guillermo Eleazar, Joint Task Force Coronavirus Shield (JTF CV Shield) commander and PNP deputy chief for operations, said only PNP checkpoints on national highways at the borders between towns and cities to ensure no delays in the movement of basic commodities.

Eleazar said they have been receiving reports that barangay officials were implementing rules and regulations that are not in line with the guidelines issued by the Inter-Agency Task for the Management of Emerging Infectious Diseases.

“Some of these barangay checkpoints are implementing their own rules which are clearly in defiance of the IATF guidelines. We in the JTF CV Shield have been receiving similar complaints from cargo owners and drivers and even from people who are supposed to be exempted from home quarantine but were being barred in barangay checkpoints,” he said.

Meantime, Eleazar explained that cargo deliveries still have to undergo inspection because some people are using these to sneak in unauthorized persons.

He also reminded that barangay checkpoints should still be supervised by the local police.

Under the enhanced community quarantine, only one person per household is allowed to go out to buy necessities. Healthcare workers and other essential personnel are exempted. (SunStar Philippines)