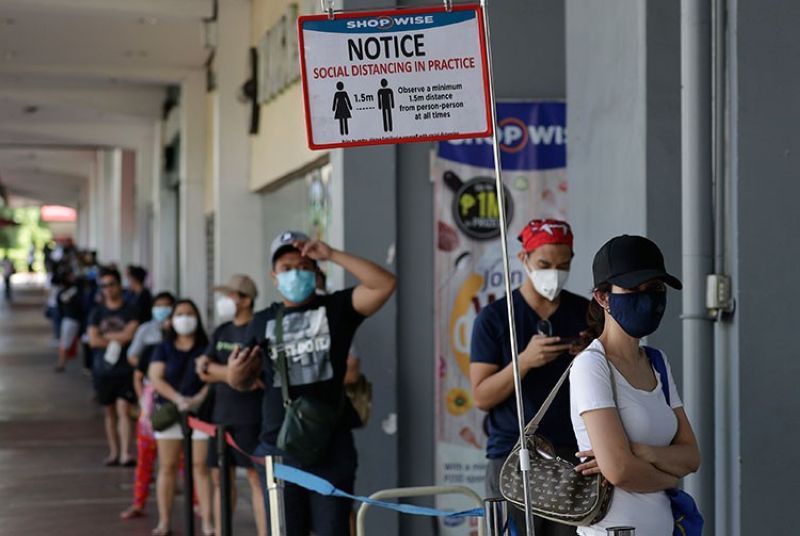 MANILA. A reminder stands beside a long line of people wearing protective masks outside a supermarket during a community quarantine to help curb the spread of the new coronavirus in Manila, Philippines on Wednesday, April 1, 2020. (AP)

EIGHT more persons have died from the coronavirus disease (Covid-19), bringing the mortality count in the Philippines to 96 as of April 1.

The Department of Health (DOH) also announced that 227 more infections have been confirmed, raising the total number in the country to 2,311.

A total of 50 patients have recovered, with one reported in the last 24 hours.

These are part of the one million PPEs worth P1.8 billion that the DOH procured for distribution to referral hospitals for Covid-19.

Vergeire said that the remaining 985,000 sets are scheduled to arrive between April 6 to 24.

Meanwhile, six of the eight mortalities reported to the DOH in the last 24 hours were male and two were female.

Of the six men, only one had no pre-existing medical condition. Both female mortalities had comorbidities.

Patient (PH) 692 was a hypertensive Filipino male, 80, from San Juan City. He died on March 30, five days after his test confirmed the infection. He had no travel history.

PH1723 was a 70-year-old Filipino male from Cebu City with unknown travel and exposure history. He died on March 28, on the same day that his test results showed he was positive for the new coronavirus. He had chronic obstructive pulmonary disease and coronary artery disease.

PH1039 was a Filipino male, 84, from Mandaluyong City with no comorbidity nor travel history. He died on March 28, three days after he was confirmed positive.

PH621 was a Filipino male, 77, from Manila with prostatic cancer and chronic obstructive pulmonary disease. He was found positive on March 24 and died on March 29.

PH1811 was a Filipino male, 66, from Parañaque City with unknown travel history. He died on March 23, but the infection was confirmed only on March 28. He was hypertensive.

PH1299 was a 73-year-old Filipino male from Pasig City. He died on March 21, but was confirmed positive on March 25. He had myocarditis, diabetic ketoacidosis, acute kidney injury and hypertension.

PH415 was a Filipino female, 79, from Makati City. Her travel history was unknown. She died on March 28, six days after infection was confirmed on March 22. She had hypertension and hypothyroidism.

PH1089 was a Filipino female, 65, from Quezon City. She died on March 22 but was confirmed to have been infected only on March 27. She had no travel history but had diabetes and heart disease.

PH179, a 59-year-old Filipino male from Taguig City, survived the infection and was discharged on March 29, 18 days after his symptoms manifested. (Jove Moya/SunStar Philippines)