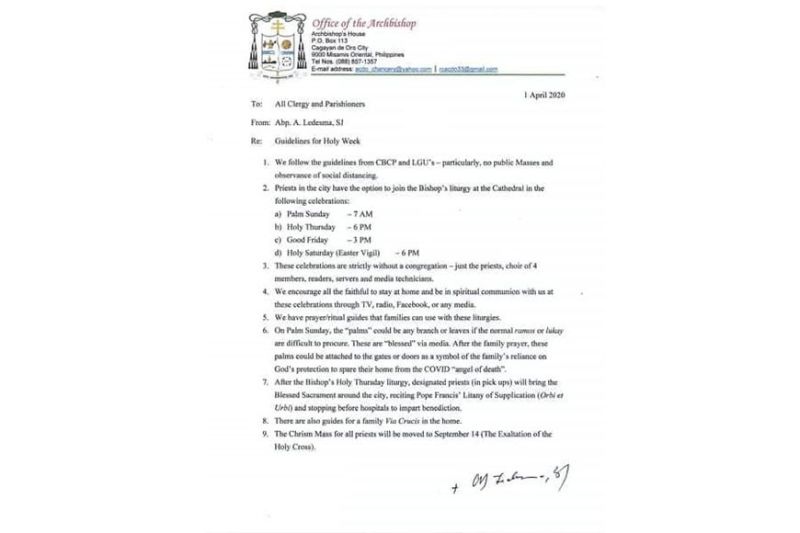 (Photo courtesy of the Archdiocese of Cagayan de Oro)

THERE will be no public masses during the Holy Week, the Archdiocese of Cagayan de Oro announced Wednesday, April 1, as a precautionary measure against the spread of the new coronavirus.

In a memorandum, Archbishop Antonio Ledesma said Catholic faithfuls can still hear the mass by watching it on television, radio, Facebook, among others.

Ledesma said they have also prepared prayer or ritual guides that families can use with these liturgies.

Priests in the city have the option to join the Bishop’s liturgy at the Cathedral on Palm Sunday at 7 a.m.; Holy Thursday at 6 p.m.; Good Friday at 3 p.m.; and Holy Saturday (Easter Vigil) at 6 p.m.

Aforementioned celebrations are strictly without a congregation, with only just the priests, choir of four members, readers, servers, and media technicians.

On Palm Sunday, the memo stated, that the palms could be any branch or leaves if the normal “ramos” or “lukay” are difficult to procure. These palms will be “blessed” via media.

After the family prayer, these palms could be attached to the gates or doors as a symbol of the family’s reliance on God’s protection to spare their home from the Covid “angel of death.”

The memo also stated that after the Bishop’s Holy Thursday liturgy, designated priests (in pickups) will bring the Blessed Sacrament around the city, reciting Pope Francis’ Litany of Supplication (Orbi et Urbi) and stopping before hospitals to impart benediction.

There are also guides for a family Via Crucis in the home.

The Chrism Mass for all priests will be moved to September 14 (The Exaltation of the holy Cross).