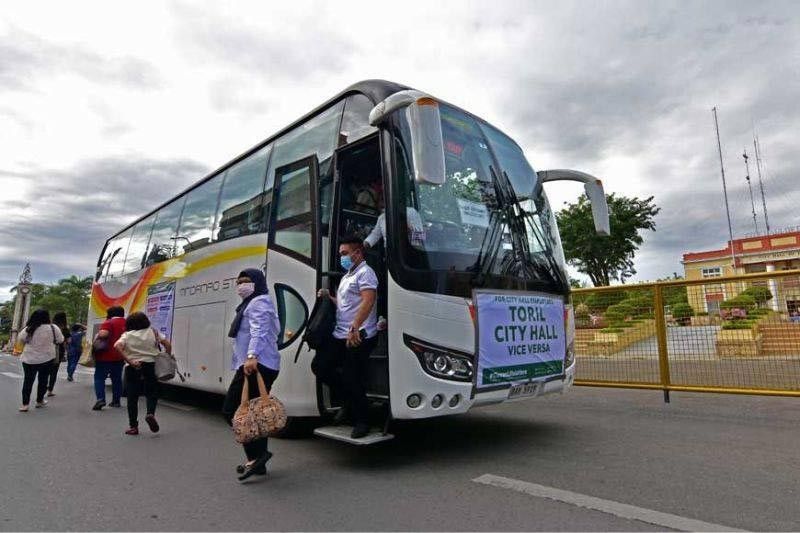 WORKERS of “essential industries” will be exempted from the curfew and need not worry for their transportation as the free ride bus offered by the Davao City Government will extend its evening operation until 12 midnight.

Davao City Mayor Sara Duterte-Carpio made the announcement on Friday, April 3, in a radio interview via 87.5 FM Davao City Disaster Radio, after essential workers who will be going to work and coming home beyond 9 p.m., the starting time of the citywide curfew as stipulated under the Executive Order (EO) No. 23 which places the entire city under enhanced community quarantine (ECQ) effective 9 p.m. of April 4, raised their concerns.

Duterte-Carpio said the augmentation free bus rides were extended to cater to these passengers.

City Transport and Traffic Management Office (CTTMO), the agency tasked for the free bus rides, deployed the buses to help employees residing in areas where there is lack of mass transportation following the implementation of community quarantine.

Initially, the first trip of the buses will start at 6:30 a.m. while the last trip will be at 7 p.m.

CTTMO head Dionisio Abude said in a previous interview that each bus, which has a seating capacity of 50 passengers, will only cater to 25 passengers, as part of the Department of Transportation (DOTr) and the local government’s mandate to properly observe social distancing due to the current Covid-19 pandemic.

Workers of these establishments are also exempted from the curfew.

Meanwhile, the mayor previously said the buses were augmented prior to the implementation of the ECQ after public utility jeepneys (PUJs), except those hired by the government to operate through the Tulong Panghanapbuhay sa Ating Disadvantaged/Displaced Workers (Tupad) program, were ordered to cease operation.

However, according to EO 23, other forms of transportation allowed to operate provided they follow the social distancing guidelines issued by the Department of Transportation (DOTr) are private vehicles and taxis (one passenger in front and back); tricycle (one passenger in front and back); single rider motorcycle or bicycle; and the buses hired by the city government.