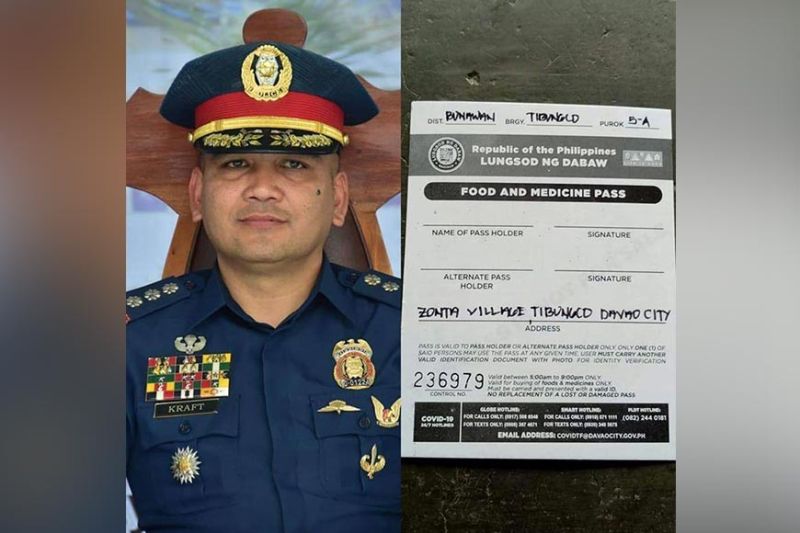 THE Davao City Police Office (DCPO) said the food and medicine (FM) pass will be implemented on Tuesday, April 7, as some villages are still waiting for the passes, which will be utilized by their constituents during the enhanced community quarantine (ECQ).

DCPO Director Kirby John Kraft, in a radio interview yesterday at 87.5 FM Davao City Disaster Radio, said based on the instruction of Davao City Mayor Sara Duterte-Carpio, the FM pass will not yet take effect today.

This came after some residents expressed their apprehension that they have not received their FM passes while the ECQ has already been announced.

The FM pass will allow the public to go outside to buy food and medicine.

Under Executive Order 23 issued on Thursday, all individuals on the streets must carry and, whenever asked by law enforcement or barangay checkpoints, must present their employee ID or food and medicine pass with valid ID whichever is applicable.

He also said with the ECQ, all his station commanders must put up additional quarantine control points especially in the markets where there is an influx of people.

More bike, foot, and mobile patrols will be roaming around the city’s streets to enforce the EO.

Aside from the FM pass, Kraft said the law enforcers will also ensure that physical distancing is observed in vehicles. Since mass transportation will be suspended under ECQ, public utility jeepneys are prohibited from doing their regular operation.

He reminded that private vehicles and taxis, and even tricycles must only have a driver and a passenger in front and one passenger at the back to observe physical distancing.