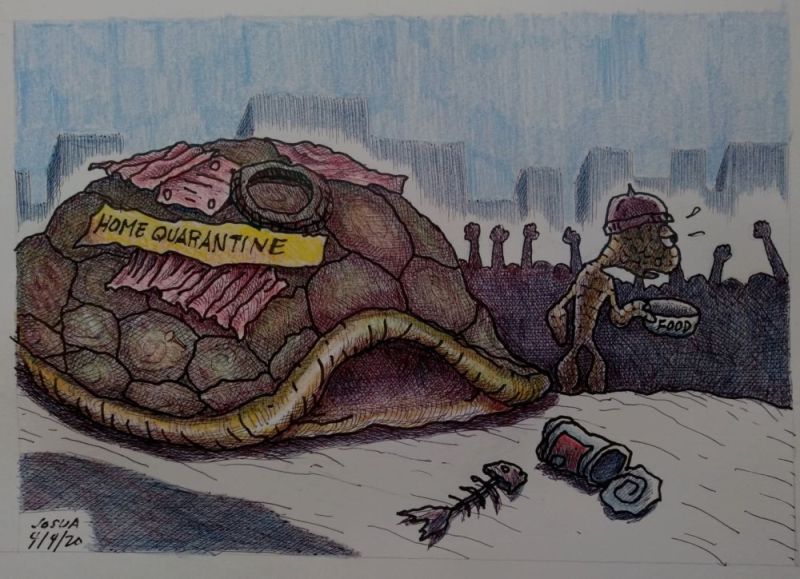 WHEN the enhanced community quarantine (ECQ) took effect in Cebu City on Saturday, March 28, 2020, Mayor Edgardo Labella had called on authorities charged with enforcing it to exercise maximum tolerance in dealing with the public, aware that being forced to stay at home would not sit well with some sectors.

Many daily wage earners have been affected by the policy, which is also in effect in the whole Cebu Province and the entire Luzon Island, to prevent the spread of the coronavirus disease 2019 (Covid-19), which claimed 53,199 lives worldwide as of Friday, April 3.

In Metro Manila, which has been under an ECQ since noon of March 17, families in some communities now rely on subsidies for their daily existence.

On Wednesday morning, April 1, over 100 residents of Sitio San Roque, Barangay Bagong Pag-asa in Quezon City took to the streets demanding food assistance from the government.

Twenty of them were taken into custody after their gathering along a portion of Edsa was violently dispersed by members of the Quezon City Police District (QCPD).

President Rodrigo Duterte, in a televised address to the nation later that night, gave the police and the military the go-ahead to shoot protesters dead, but only if they found themselves in danger.

Perhaps, it would have been more prudent for the President to bring up Section 3 (c) of Batas Pambansa 880, which defines the term “maximum tolerance” as “the highest degree of restraint that the military, police and other peace-keeping authorities shall observe during a public assembly or in the dispersal of the same.”

No doubt the current crisis has put many on edge.

The sight of the protesters who included many children out there on the streets defying the ECQ and risking themselves to exposure to the virus must have driven members of the QCPD to behave the way they did. After all, they also risk their lives and the lives of their family every day they go out.

But the enemy is not the State nor the public. It is Covid-19. It’s best to remember that.