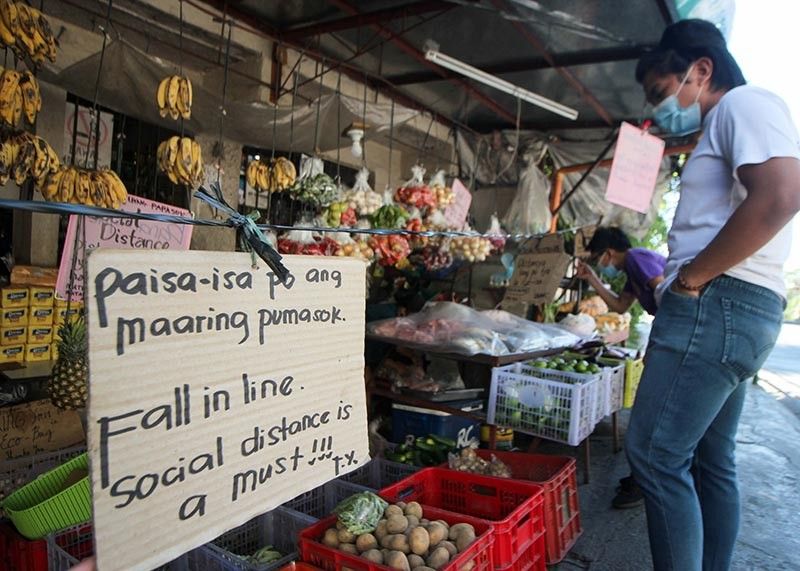 BAGUIO. Customers follow social distancing at a store in Campo Sioco, Baguio City. Several signs and a barrier are placed as a safety precaution against Covid-19. (Photo by Jean Nicole Cortes)

CORDILLERA police issued a stern warning for those inclined to plan destabilization and instigate disorder during the Luzon-wide enhanced community quarantine (ECQ).

Brigadier General R’win Pagkalinawan, director of the Police Regional Office–Cordillera (PRO-COR), cautioned left-leaning and lawless groups not to take advantage of the people during the Covid–19 pandemic or face the bullet.

“He [President Rodrigo Duterte] is talking about the leftists. I will order my snipers to shoot communist organizers on the spot who will unnecessarily organize the masses at this time. But only when they fight back,” Pagkalinawan said.

The Cordillera top cop made the statement on the heels of orders from President Rodrigo Duterte for all police and military to shoot trouble makers during this lockdown period.

Duterte’s statements came just hours after a group of Manila residents from Quezon City in Sitio San Roque gathered along Edsa until they were arrested and dispersed for violating guidelines of the Luzon-wide enhanced community quarantine.

The group was reportedly protesting the lack of food assistance from the government.

In a separate statement, General Archie Gamboa, Philippine National Police chief said he would not shoot anyone dead despite President Duterte’s warning.

“The only time that we will be forced to use arms is when our lives and the lives of the innocent are in imminent danger, needing protection and of self-defense. We see the strong message of the President and I think all the personnel of PRO-COR understood it,” the regional director stated.

Pagkalinawan said the 7,000 strong members of PRO–COR will always exercise maximum tolerance and move within the bounds of the law while performing their duties as law enforcement agents.

“We call on the public to not resort to these things. It is the mandate of the PNP to enforce the law. As an example based on the Joint Task Force Corona Virus Shield, tasked to implement government’s guidelines on the Luzon lockdown, physical punishment must not be imposed on arrested curfew violators,” Pagkalinawan added.