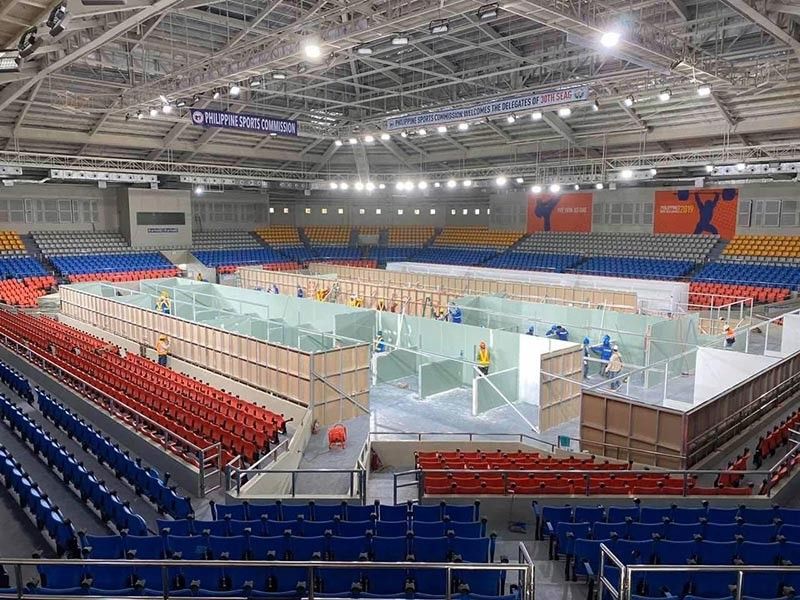 PAMPANGA. The Rizal Memorial Sports Complex-Ninoy Aquino Stadium in Manila City is being transformed into a quarantine site. (Contributed photo)

CLARK FREEPORT -- The Philippine government is scaling up the conversion of major facilities in Metro Manila and in other parts of the country into instant hospitals to effectively control the spread of the coronavirus disease (Covid-19) and ensure the safety of the communities.

The Rizal Memorial Sports Complex-Ninoy Aquino Stadium in Manila City, the Philippine International Convention Center (PICC) Forum Halls and the World Trade Center, both in Pasay City are being transformed into quarantine sites.

During the briefing, Bases Conversion and Development Authority (BCDA) President and CEO and Presidential Adviser for Flagship Programs and Projects Secretary Vince Dizon laid down the three objectives in developing the quarantine facilities: 1) reduce the community spread of COVID-19, 2) decongest hospitals in Metro Manila to save more lives, and 3) save patients at the first stages of the disease and protect the frontliners.

Dizon said about a thousand patients can benefit from the three major facilities in Metro Manila, especially residents in the surrounding areas.

The Ninoy Aquino Stadium inside the Rizal Memorial Sports Complex will be operational as early as next week, while both the PICC and the World Trade Center in Pasay City will be finished on April 11.

The quarantine facilities will have airconditioned cubicles, free food for patients and the frontliners, free access to internet connection, and 24/7 monitoring by doctors and nurses.

Architect Dan Lichauco, an expert in hospital design, emphasized that each facility is designed to ensure protection of the staff and health workers, and followed the protocols of the Department of Health (DOH).

“The hospitals itself are designed to make sure the patients are comfortable. We made sure that there are outlets in their cubicles so that they can plug-in their devices, we also have nourishment stations, water stations, so that they can basically get what they need while they are quarantined there. We have adequate toilets and showers in each facility and in everything we do, we made sure na hindi po magkakahawaan ang mga tao and we’re protecting the nurses and the staff as they move in and out of the facility,” Lichauco said.

Lichauco designed the quarantine centers in Metro Manila, ensuring these facilities meet the needs of patients, and at the same time, protect our frontliners. He was also the architect for the University of the Philippines-Philippine General Hospital (UP-PGH), Medical City hospitals, The Asian Hospital and Medical Center, and the UP-PGH Polyclinic in New Clark City.

The other facilities in the National Capital Region that will be converted into instant hospitals include the Veterans Memorial Medical Center, Quezon City Circle, Amoranto Stadium, Quezon Institute, PhilSports Complex, Duty Free, FTI station in Taguig City and the Filinvest Tent in Alabang. Construction of facilities in Central Luzon are also underway at the Philippine Arena in Bulacan, the ASEAN Convention Center in Clark, Pampanga, and the New Clark City Government Center in Capas, Tarlac. The New Clark City Athletes’ Village will also be used as a quarantine site.