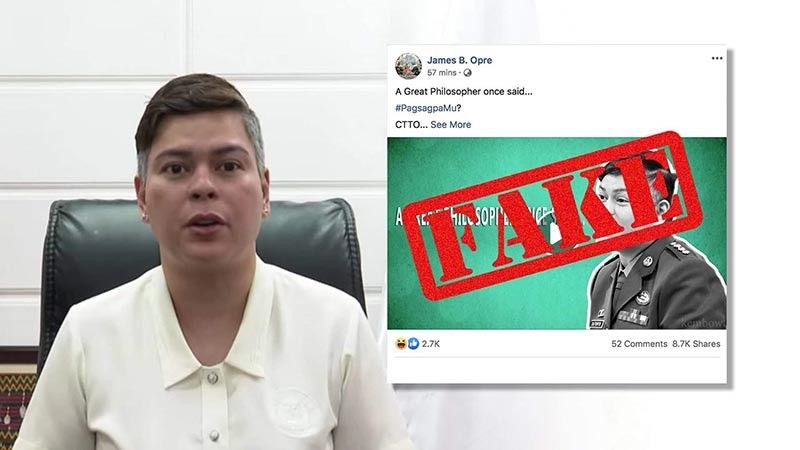 A NETIZEN caught the ire of Davao City Mayor Sara Duterte-Carpio for spreading a fake social media content, manipulating her previous audio interview, and maliciously made it viral.

On Saturday morning, Facebook user James B. Opre uploaded video post, with the caption “A great Philosopher once said... #PasagpaMu? (do you want to be slapped?).”

On the video, the mayor can be heard saying “Ana ko stay-at-home unya makita tamo mag order og pizza sa Alberto’s, unya mag take-out og milk tea tas mag yawyaw mo asa ang rasyon? Pasagpa mo? (I said that you stay at home, and yet I get to see you buying pizza at Alberto’s, and buy take-out orders on milk tea shops. Now you’re complaining to ask for ration goods? Do you want to be slapped?).”

However, the mayor said the audio was trimmed down.

“The complete interview highlighted my condemnation against memes and other social media contents that twisted my official statements aired over Davao City Disaster Radio,” Duterte-Carpio said in a statement posted on Davao City Government Facebook page on Saturday afternoon, April 4.

The full audio clip of the interview aired on March 31 can be fully traced on Disaster Radio’s Facebook page.

The video was immediately deleted after the mayor named Opre during her radio interview.

In a recent radio interview, the mayor called it new “modus” in creating memes.

“Giingnan na sa social media monitoring nga dili basahon ang fake memes kay ang ilang ginabuhat is that gina-slice na nila ang atuang recording. Ginatagaan nila og laing meaning (Our social media monitoring team warned me not to read the content of those fake memes that circulated online because they will just trim down the audio of my recorded interview, and give it a different meaning),” Duterte-Carpio said.

She also called on the Philippine National Police to investigate it.

“People like Opre deserved a lesson,” the mayor said.

She also said, “This incident only reinforced my previous call against this sick habit of people to create content with the intention of making themselves famous online — and to also misinform, amuse, and confuse the public.”

The mayor reiterated her call to the public to refrain from creating, uploading, and sharing content on social media that could cause more confusion, misunderstanding, and fear among the public.

Duterte-Carpio has recently been the subject of online false information, such as memes and false online posts.

On Friday, April 3, the mayor lambasted creators of an online post claiming her views about federalism, which criticized local government unit (LGU) officials, and how the national government is responding to the coronavirus disease (Covid-19) health crisis.

She denied the post has been making the rounds on social media and has been shared and reposted by supporters of her father, President Rodrigo Duterte.

The mayor also warned individuals manipulating online news graphic templates of edited mockery verbatim posts that were attributed to her.

SunStar Davao messaged Opre to get his personal side on his action. But he did not respond.

However, he apologized in his personal account for his action.

“I humbly write/post to express my sincere apologies for the video meme I shared here in my timeline. No intention to cause trouble during this trying time [sic],” he said.

Under the Bayanihan to Heal as One Act, signed by President Rodrigo Duterte, a person or group spreading false information shall be punishable with imprisonment of a two-month jail sentence or a fine of P10,000 to P1 million, or both.

In section 6 (f), violators of this law are those perpetrating, or spreading false information regarding Covid-19 crisis on social media and other platforms, such information having no valid or beneficial effect on the population, and are clearly geared to promote chaos, panic, anarchy, fear, or confusion; and those participating in cyber incidents that make use or take advantage of the current crisis situation to prey on the public through scams, phishing, fraudulent emails, or other similar acts.