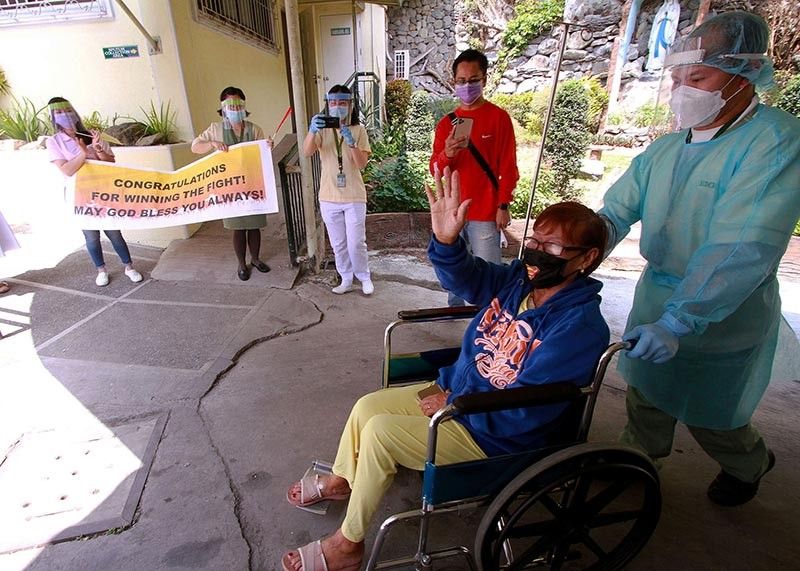 BAGUIO. Milagros Costales, a 73–year-old Covid-19 patient from Baguio recovers from the disease and is discharged Saturday, April 4, 2020 after a team of doctors and nurses from Notre Dame de Chartes Hospital cared for her 24/7 for 15 days. Costales is the fifth Covid graduate from Baguio to go home healthy. (Photo by JJ Landingin)

THE mountain resort found reason to celebrate on the discharge of five Covid–19 patients making the third week of strict quarantine marked with hope.

On Saturday morning, April 4, pink balloons were placed at the discharge area of the Notre Dame De Chartes Hospital in celebration on the release of Milagros “Mila” Costales with health workers clapping as they lined to send the Covid-19 survivor off.

Mila, a 73-year-old grandmother of four, was admitted March 20 and given a clean bill of health on Saturday after more than two weeks of confinement.

Mila, a devoted Catholic, said it was her faith which pulled her through the ordeal.

“My faith never left me, I kept on praying. Let us not be afraid of Covid-19, let us be afraid of ourselves,” adding prayers to her patron saint, St. Therese of the Child Jesus, kept her positive thinking throughout her confinement.

Mila, a widow for three years now, said she wants to be a source of inspiration to Covid–19 positive patients as well as senior citizens who fear being afflicted with the disease.

“Age does not matter in Covid, look at me, I survived, this is not a death sentence, everyone just has one life, we have to keep our faith strong,” said Costales with conviction.

Mila said it was her one-day travel to Manila that marked the start of her Covid-19 journey with a loss of appetite and diminishing taste buds coupled with a general weakening of her body.

The usual symptoms of sore throat, fever, and diarrhea were not present which made her think she was just coming down with the flu as life continued for her, the urgency to pay her Baguio Water District and Benguet Electric Cooperative bills set in before she fell ill.

On her seventh day in confinement, she began to feel better and craved for food, her brother-in-law, Jojo, brought her danggit and pusit, as her request, and started her road to being Covid-free.

Another series of tests were done on Mila to ascertain she is free of the virus which kept her praying fervently every day with words of encouragement from her team of doctors.

Mila’s three children are all overseas, as well as her four grandkids who are now grown up. She cites nephews, nieces and relatives of her late husband as the family who took care of her.

Mila says lawyer, Ron Perez, a nephew she treats as her own son, took care of all paperwork, fetched her from the hospital and brought her home.

On her homecoming, Mila was served paksiw na bangus and tinola.

Mila wants to tell the world there is hope amid the Covid-19 pandemic and wants everyone to fight the feelings of hopelessness with strength and adherence to guidelines of social distancing and staying home.

Tubera said the patients have strong immune systems in place enabling them to fight the virus to recovery with no history of hypertension, diabetes and tuberculosis.

Rowena Galpo, also from the CHSO believed the city has reached its peak with almost a week of zero positive cases reported and hopes it to be indicative of a flat curve but warned it does not mean that the fight against the disease is over and the city can be complacent.

Galpo cautioned that the city may have not seen a new positive case in days but people must not let their guards down and continue observing Covid-19 control measures to sustain it in the remaining days of the Luzon-wide enhanced community quarantine and beyond.

Mila meanwhile wants to thank her team of doctors at the Notre Dame Hospital for taking care of her throughout her confinement.

The entire hospital bill of Mila was shouldered by PhilHealth which brings her to advise the public to report if they have symptoms and not think of the cost of medication and confinement.

“Whether you have money or not, have yourself checked, do not be afraid. Just pray,” Mila said.