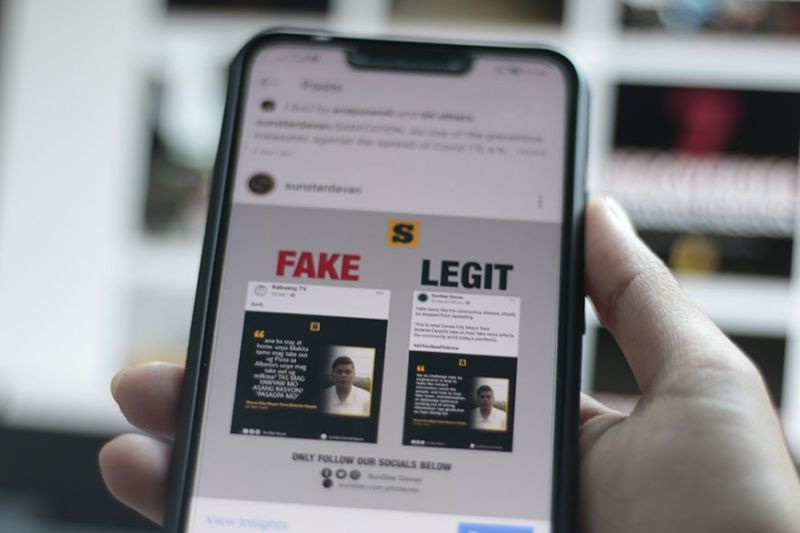 Davao City Mayor Sara Duterte-Carpio has been a subject of fake news recently. A number of hoax statements attributed to the city mayor were circulating online. Duterte-Carpio advised public to be vigilant and verify first the information before sharing to avoid the spread of infodemic. (Ace Perez)

YOU probably have received content on Facebook messenger sent by a friend or your aunt saying "bananas can make you immune from acquiring the highly-infectious coronavirus disease (Covid-19)."

There are only three possible ways on how you acted under this situation. One, you called your friend or aunt’s attention and told them to stop spreading such lies after verifying that the content is fake. Or you ignored the message after reading it because you lost care whether such content is true or not. Or probably, you immediately shared it to your circle without even bothering the veracity of such a message. Which one are you? If you responded like the second or last option, consider yourself a contributor to the ‘infodemic’ of mis/disinformation. And you are not helping.

‘Infodemic’ is a term coined by the World Health Organization (WHO) to describe the rapid spread of mis/disinformation. WHO explains infodemics are an excessive amount of information about a problem, which makes it difficult to identify a solution. They can spread misinformation, disinformation, and rumors during a health emergency that can hamper an effective public health response and create confusion and distrust among people.

“We’re not just fighting an epidemic; we’re fighting an infodemic,” Tedros Adhanom Ghebreyesus, director-general of WHO said at a gathering of foreign policy and security experts in Munich, Germany, in February.

Davao City is not spared from this phenomenon. Even before the city recorded its first confirmed Covid-19 case, Dabawenyos already suffered the consequences of fake news.

It can be recalled that Dabawenyos, especially those living near the city’s shoreline, panicked after receiving messages and seeing posts about a possible tsunami following the 6.3-magnitude tremor that rattled Mindanao last October 16, 2019. The perpetrators were apprehended by the police and faced legal consequences.

But Dabawenyos seem to not learn from this experience. The gravity of the problem even worsened with the Covid-19 pandemic.

Many successful pieces of fake news circulating on messenger or any other medium about Covid-19 start with: “A friend who has a sister in Manila” or “A neighbor whose aunt works at the Southern Philippines Medical Center or Department of Health.” When you receive information with these attributions, these are most likely fake.

Before the City Government placed the entire city under community quarantine on March 15 and later on put under enhanced community quarantine on April 4, there were rumors spreading about the closure of supermarkets which made uninformed individuals flocked the markets violating the physical distancing rule, a significant measure to stop the spread of the disease.

But maybe, the most common misinformation these days are the hoax statements attributed to the Davao City Mayor Sara Z. Duterte-Caprio.

One is a voice clip being passed on messenger app recording imitating the voice of the mayor saying that the public should now be hiding in their respective houses as there are now local transmissions in the city. This is an example of deep fakes.

Another is a text message claiming that the city will have an early curfew. Memes about the mayor issuing statements on slapping persons caught not obeying Covid-19-related rules or complaining about the city’s relief goods distribution were also rampant using templates of reliable sources and media organizations.

A more sinister type was that fake news suggesting a police officer shot a person on the street because of not wearing a face mask.

The mayor admitted misinformation has been a struggle, not only for the local government but also for the national government.

“These incidents only reinforced my previous call against this sick habit of people to create content with the intention of making themselves famous online — and to also misinform, amuse, and confuse the public,” she added.

Under the law recently signed by President Rodrigo Duterte granting him additional powers to fight the coronavirus disease, a person or group spreading false information shall be punishable with imprisonment of a two-month jail sentence or a fine of P10,000 to one million or both.

In section 6 (f), violators of this law are those perpetrating or spreading false information regarding Covid-19 crisis on social media and other platforms, such information having no valid or beneficial effect on the population, and are clearly geared to promote chaos, panic, anarchy, fear, or confusion; and those participating in cyber incidents that make use or take advantage of the current crisis situation to prey on the public through scams, phishing, fraudulent emails, or other similar acts.

With millions called to stay at home, more people are exposed to their mobile phones accessing Facebook, Twitter, and other social media sites as major sources of Covid-19 updates. These are also where misinformation thrives.

Sylvie Briand, director of Infectious Hazards Management at the WHO's Health Emergencies Programme, said fake news has been a problem even before. The only difference now is with social media the phenomenon is amplified.

But why do people create fake news content even during a crisis?

Jessa Marie Catada, a practicing psychologist based in Davao City, explained that during a crisis, people are experiencing emotional turmoil. And with all the negative emotions around caused by this pandemic, some people who originally create fake news may have two intentions.

First, because of feelings of helplessness and fear, they want to get control of the situation by translating their own beliefs into reality and that is, through getting everyone to believe in their information even if it is not true.

“This will give them a false sense of relief if people will agree with them,” she said.

Second, Catada said, their intention might be geared towards destroying someone or something and they find this a perfect timing.

“Since people nowadays are more vulnerable to becoming victims of false information especially that they are bombarded with latest news or information about Covid-19,” the psychologist said.

But why does mis/disinformation flourish?

Citing Dr. Chrysalis Wright from the Psychology department at the University of Central Florida, Catada said this can be attributed to a psychological term called confirmation bias.

“This entails that humans seek to gather information even if not accurate that will confirm their beliefs and point of view. So, if we come across false information that makes us feel emotional or these do not oppose our perspectives, as social beings, we believe immediately and communicate these to other people especially to our friends and family,” she said.

She also explained that this spreads one-sided stories, panic-induced news, and erroneous information.

Social media company giants like Facebook and Twitter are making efforts and joining the fight against mis/disinformation by sorting, ranking, and prioritizing reliable information on their platforms.

While going after the content creators of fake news is imperative, consumers must also be focused as mis/disinformation is not just a problem of content, it is also a concern of transmission.

But how can we stop the spread? Simple. Educate. But this is easier said than done.

With how the problem on fake news adds up to worsening Covid-19 global situation, media literacy should be treated seriously, more than ever.

When the audience or consumers of content know how to spot fake from facts and take extra precautions before sharing anything online, infodemic will never be a problem.

The education should start from the future communicators.

Derf Hanzel Maiz, Director of Social Communication, Promotion, and Media Center, and Coordinator of the Bachelor of Arts in Communication of the Holy Cross of Davao College, shared media education should also equip students with the right skills as to how images and audios can be manipulated. In doing so, students will have that consciousness that not all they see online is true and reliable.

“If we develop among them the consciousness that if photos and videos can be manipulated, people will have a deeper understanding that false information can easily be fabricated,” he said.

He also emphasized that in navigating the online realm, the rule of thumb should be: Always be skeptical.

“Even if it is from a reliable source, it is still a must to verify and cross check information,” Maiz added.

Some fake news also hides under a mixture of correct information, which makes it difficult to spot what is true and accurate. Moreover, fake news may also be shared by trusted friends and family, including persons in authority.

Before sharing, take these simple reminders as a guide in verifying information:

(1) Check if the information was released officially by a government agency. Many government agencies and local government units have Facebook pages where they post the latest announcements and updates regarding Covid-19. For Covid-19 updates, best to check the World Health Organization, Department of Health, and City Government of Davao.

(2) Cross-check the information if it has already been published or posted on the digital platforms of legitimate media outfits. If it is a breaking story, most likely it is on their social media pages. Full stories would usually follow -- it may be broadcasted over the radio or published on their website.

Fake news, once it is out there, can spark harm and panic among people, and debunking this information can be a real hard task.

The government and communication companies can only do so much in going after the creators of fake news. But the cycle of infodemic can end when people start to learn how to identify fakes from facts and choose to not share this information.

In times like this, it seems that fake news can spread faster than Covid-19. Infodemic can be more dangerous than a pandemic. But if people will start to understand that there is a shared responsibility among them to stick to the facts, to respect the process of verification, and to always think twice (or more) before sharing, infodemic will die a natural death.