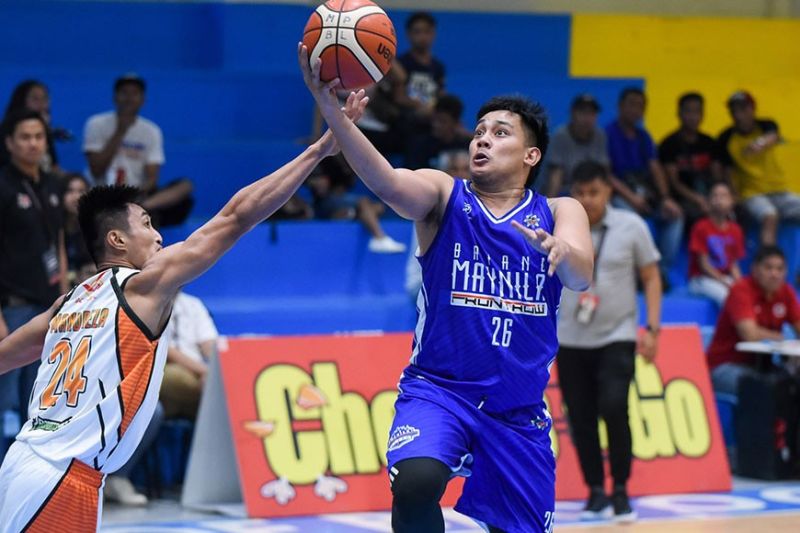 CEBU'S FAVORITE. Former Southwestern University-Phinma guard Macmac Tallo, who has played for Manila and Bacolod in the MPBL, is the top choice for point guard in an ideal all-Cebuano squad. (Contributed Photo)

CEBU has long been considered the hoops hotbed of the south, known for producing great players and ruling commercial hoops basketball, thanks to the dominance of renowned teams such as the M. Lhuillier Kwarta Padala-Cebu Niños and the Cebu Landmasters-Mandaue.

With the bar of excellence set high, it is understandable why Cebuanos are expecting a lot from their representatives in the Maharlika Pilipinas Basketball League — the Cebu-Casino Ethyl Alcohol squad.

Unfortunately, that has not been the case. After making it to the South Division playoffs during the 2018 season, Cebu stumbled to an even 15-15 win-loss record this season and failed to advance to the playoffs.

With uncertainty hovering over the current MPBL season and the next because of the Covid-19 threat, SunStar Cebu asked several prominent Cebuano basketball personalities this intriguing question: If they were to compose an ideal all-Cebu squad in the MPBL, which players would they choose?

Mikey Cabahug, the son of former PBA great Elmer Cabahug, who suited up for Navotas in the MPBL, said that his quintet would be Macmac Tallo, Emman Calo, Enrico Llanto, Jason Melano and Patrick Cabahug.

“Tallo has high IQ with great passing skills. He loves the break and is most effective when he is guarded one on one. He can also shoot and at the same time penetrate with ease,” said Cabahug of Tallo, who he said would be the starting at point guard for his Cebu team. Tallo has recently signed on to play for Bacolod in the MPBL.

Cabahug added that Calo — who is starring for Davao Occidental — will complement Tallo in the backcourt. “Emman is a pesky defender who is tough, quick and athletic. He is like a mini-Westbrook who can do everything for this team. He can penetrate and shoot.”

Reeve Ugsang, the former standout big man of Southwestern University-Phinma, has Jaybie Mantilla or Koko Pingoy starting at point guard, Calo at the two, Rene John Saycon at the three, Rhaffy Octobre at the four and Alfred Batino at center.

“Octobre has the size and the outside touch,” said Ugsang, “while Batino plays his role very well, smart and is a great defender.”

Ryan Betia, currently an assistant coach with the Far Eastern University Tamaraws in the UAAP and the Blackwater Elite in the PBA, said his five will be Tallo, Cabahug, Octobre, Llanto and Batino.

“Batino and Llanto will provide the inside presence and they will complement one another since both of them can shoot from the outside. They will give Tallo and Cabahug a lot of space to work with. Special mention will be Emman Calo. He should be there also,” said Betia.

Joseph Nalos, currently a point guard for the Bataan Risers, shared that he will ideally team up with Tallo, veteran wingman and former University of the Visayas Baby Lancer Reed Juntilla, powerful banger and ex-Southwestern University-Phinma power forward Bernie Bregondo and Batino.

“For me, this would be my lineup because they have the experience, especially in the playoffs,” Nalos said in Cebuano.

Former University of Cebu assistant coach Rafael “Rocky” Alcoseba opted for a team that has a potent mix of both youth and veteran savvy, listing down either Darrell Shane Menina or Tallo at point guard, reigning Cebu Schools Athletic Foundation Inc. MVP Shaq Imperial or Tristan Albina at the two, Rhaffy Octobre or Reil Cervantes at the three, Mark Yee or Llanto at the four, and Batino or Cebu big man Edrian Lao at the five.

“I selected this lineup because of the ball handling abilities from positions one to four. We can transition real quick. We can space the floor, and create off the dribble and kick it out in the perimeter,” said Alcoseba, the son of decorated head coach Raul “Yayoy” Alcoseba.

“We can also do the post game since Batino, Lao and Yee can play the post game really well. Mark Yee has to be in the team because of his leadership and court presence. So, ma-fall in line ang mga young players.”