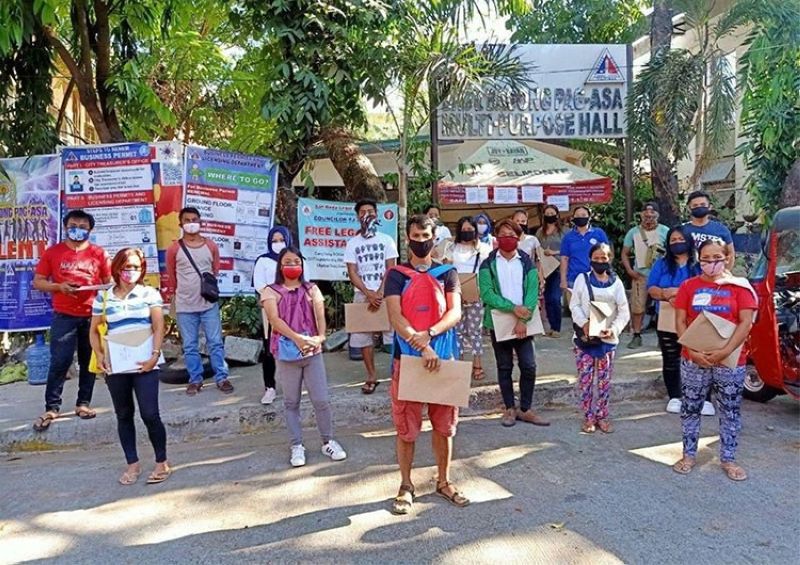 MANILA. Relatives and neighbors of the San Roque 21 bring the documents needed to secure the detainees’ temporary freedom. (Photo from Save San Roque Facebook)

WITH financial assistance from celebrities, the 21 protesters who were arrested in Quezon City for allegedly inciting a riot over the lack of food aid in violation of quarantine rules were able to post bail Monday, April 6.

Among those who contributed for the P15,000 bail set for each of the 21 detainees were Simone Francesca “Kakie” Pangilinan and her family, Ria Atayde and Enchong Dee, according to a press statement issued by the Save San Roque Alliance.

The 21 detainees were expected to be set free Monday, around six days after they were arrested for staging a rally to protest the alleged failure of the local government to provide relief aid to residents of Sitio San Roque, an urban poor community in Barangay Bagong Pag-asa in Quezon City.

Earlier Monday, Quezon City Police District (QCPD) Director Ronnie Montejo said he dispatched some policemen to the community after receiving information that residents there led by left-leaning urban poor group Kadamay posted protest placards and organized a community kitchen which may be in violation of the social distancing policy.

“This morning, April 6, 2020, the QCPD has dispatched policemen at Sitio San Roque, Brgy. Bagong Pag-asa to conduct a dialogue with members of Kadamay led by a certain Estrelita Bagasbas,” Montejo said in a statement.

“The group apparently established a Kadamay Kainang Bayan; however, protest placards were seen posted by the group. After a dialogue with the group of Bagaspas, the QCPD requested them to remove their protest placards which they voluntarily submitted to and reminded them to observe social or physical distancing,” he added.

The San Roque residents led by Bagasbas staged a rally along Edsa on April 1 in violation of the strict quarantine rules to observe social distancing. The protest action and the resulting commotion earned the ire of President Rodrigo Duterte.

Those who were arrested were slapped with multiple charges.

Aside from the P15,000 bail bond, each of the 21 detainees had to pay a processing fee of P2,500 and submit the following documents: an affidavit of undertaking; waiver; house sketch; barangay certification of residency and clearance; handprints; 9 copies of 2x2 photos; and certificate of detention from Camp Karingal.

“Mare-release today (April 6) for sure,” he added.

Metro Manila and the entire Luzon is under an enhanced community quarantine, which mandates most of the population to stay home until April 14 as a measure to contain the coronavirus disease (Covid-19). (Third Anne Peralta-Malonzo/SunStar Philippines)