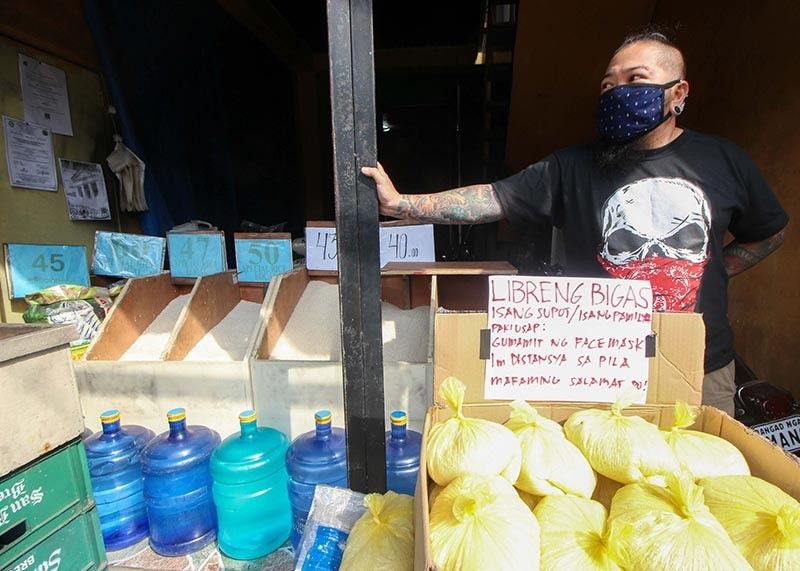 BAGUIO. A rice trader in Barangay San Luis distributes free rice to his neighbors amid the Luzonwide enhanced community quarantine. Almost 400 kilograms were distributed by the trader. (Photo by Jean Nicole Cortes)

THE Baguio City Government is looking at possible tax relief or incentives for businessmen whose operations have halted due to the Luzon-wide enhanced community quarantine (ECQ).

City Mayor Benjamin Magalong explained incentives is one of the measures the local government is looking at for the business community now providing assistance in the time of Covid-19 pandemic.

“This is one of the areas that we discussed with Vice Mayor Faustino Olowan on how to provide some tax relief or incentives to our local businessmen, especially those who will wave payments for their rent to which we will provide incentives and this will be one of their discussions in the City Council session,” Magalong said.

Baguio City temporarily closed tourist spots and nits support facilities which includes food, accommodation and leisure due to the ECQ.

“For those heeding the call of the city for them to wave rental fees will be given incentives by the City Government because what was given to them was just a grace period and when you say grace period, this is just a delayed payment of rentals. Unfortunately, there is no law stating businessmen to wave rental fees which is why we have to appeal them,” Magalong added.

Restaurants continue to operate but on take-out and delivery services only, while cargo and supply deliveries to and from the city, is unhampered.

Vice Mayor Faustino Olowan meanwhile said the City Council will be looking for incentive programs that would benefit the business sector in the city.

“In the city of Baguio, that could be done through an ordinance. We already approved an ordinance on first reading which will go through the process, and once approved then a tax relief for our businessmen will be given and I’m sure our mayor is recommending for immediate approval,” Olowan added.