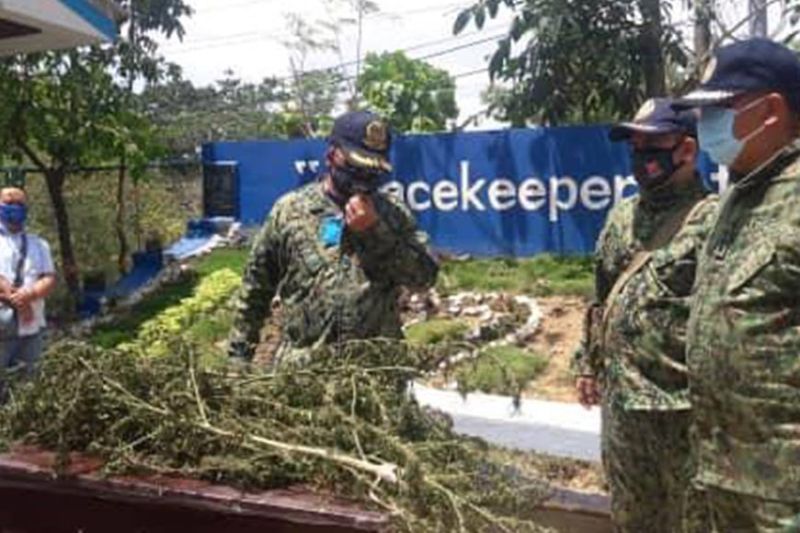 THE Toledo Police together with the Cebu Provincial Police Office and the Second Provincial Maneuver Force Company of Brgy. Pangamihan busted a marijuana plantation in Toledo on Sunday, April 4, 2020.

Around 3,000 fully grown marijuana plants were uprooted in Barangay Claudio. An estimated value of P1,462,000 for 1,000 grams dried marijuana leaves was also seized from the farmers namely, Irich Jimm Magbanua, Zosa Panfilo and Odvina Labiste. However the other suspects namely, Avelino Allecer Jr. and Gabriel Lania Allecer escaped during the raid.

Another suspect named Ramil Allecer Llaguno, 41, a resident in the area was also captured and seized with 1,200 stalks of dried marijuana with an estimated value of P480,000 and a .38-caliber pistol.

After the success of the operation, General Albert Ignatius Ferrero made a visit to the Toledo Police Office and Cebu Provincial Police Office to personally congratulate them.

He also handed 200 pieces of face masks, 100 pairs of gloves and five gallons of alcohol to the Second Provincial Maneuver Force Company.

General Ferrero shared that they have captured 2,175 people, most of whom are minors, for violating the curfew implemented as part of the measures to stop the spread of the coronavirus.

The minors underwent a seminar on Covid-19 and counseling conducted by PRO 7. The other 615 were fined, 12 were ordered inquest by the fiscal, 12 were filed a case against and 354 were arrested.

On the other hand, there were 393 who were arrested and received citation tickets due to traffic violations, while 100 people were arrested for violating the liquor ban. (AYB / MMC)