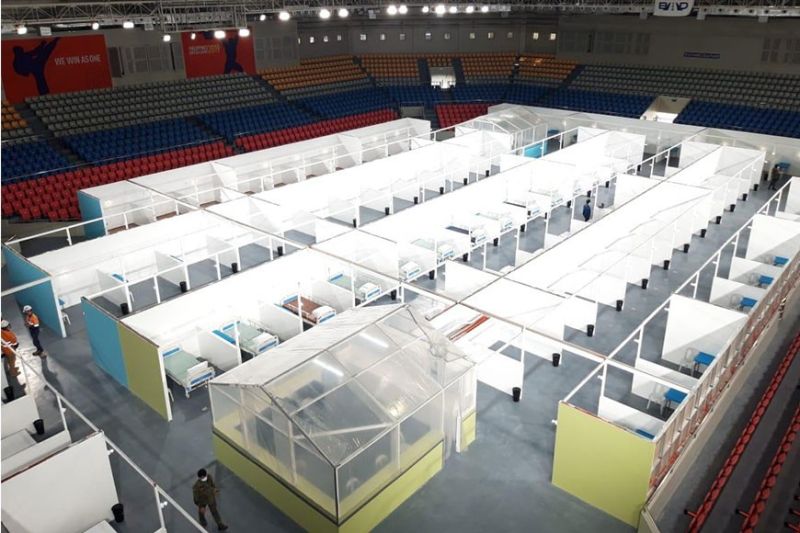 MANILA. The Ninoy Aquino Stadium at the Rizal Memorial Sports Complex can accommodate up to 112 patients suffering from the coronavirus disease (Covid-19). (Photo from BCDA Twitter)

THREE facilities that have been repurposed to house patients who have contracted the new coronavirus and two passenger ships that will serve as quarantine areas for repatriated Filipino seafarers will be operational this week, officials announced.

Department of Health (DOH) Secretary Francisco Duque III said the Philippine International Convention Center (PICC) has 294 beds, the Ninoy Aquino Stadium at the Rizal Memorial Sports Complex has 112, and the World Trade Center Metro Manila can accommodate up to 502 patients.

The two quarantine ships, which are owned by 2GO Group Inc., have docked at Pier 15 in Manila, the Philippine Coast Guard (PCG) announced Tuesday morning, April 7.

The PCG said it will operate the ships along with the DOH and the Bureau of Quarantine (BOQ) beginning this week.

The Philippine Arena in Bocaue, Bulacan, which is owned by the Iglesia ni Cristo (INC), is also being eyed as a “mega quarantine facility”.

The Philippine Arena is the largest indoor arena in the world with a floor area of 99,000 square meters and seating capacity of over 50,000.

Cabinet Secretary Karlo Nograles, spokesman of the Inter-Agency Task Force for the Management of Emerging Infectious Diseases, said the INC has agreed to let the government convert the arena into a quarantine facility.

Department of Public Works and Highways (DPWH) Secretary Mark Villar said the quarantine facilities in Metro Manila are aimed at easing the burden on hospitals which are currently overflowing with patients with the coronavirus disease (Covid-19) and other patients under investigation (PUI).

The PICC was transformed into a quarantine facility by the Villar Group of Companies. It will be managed by the Philippine National Police (PNP) Medical Corps.

Duque said the Ninoy Aquino Stadium will start to accept Covid-19 patients starting Wednesday, April 8. It is undergoing the final stages of disinfection.

It will be managed by the Armed Forces of the Philippines (AFP) Medical Corps.

Dizon said the stadium was repurposed into a quarantine facility by the Prime BMD and Bloomberry Cultural Foundation, Inc. of the Razon Group.

The government also partnered with the Boysen Philippines Inc. in making the facilities color-coded for the protection of the medical staff inside the facilities, Dizon added.

The World Trade Center in Pasay City, a huge exhibition and events center, is being converted into a quarantine facility by the ICCP Group and its affiliate Manila Exposition Complex, Inc. (MEC) together with the Ayala-owned Makati Development Corporation.

“The idea is really twofold: we need these quarantine centers because we want to be able to move Covid-positive patients from their communities into facilities such as this. This was also done in other countries as well, but even equally important is we have to help our hospitals decongest, and allow more hospital beds to be used by more severe patients with Covid-19,” Dizon said in a Laging Handa briefing.

Under Republic Act (RA) no. 11469, or the Bayanihan to Heal As One Act, the President is authorized to direct the operation of privately owned establishments such as hospitals, transport companies, and hotels to provide temporary medical facilities and services.

As of April 6, the total number of confirmed Covid-19 cases in the country has increased to 3,660 while the death toll has gone up to 163. Seventy-three patients have recovered from the disease.

Worldwide, Covid-19 has killed 67,594 people as of April 6. A total of 1.21 million people in over 200 countries have been infected. (Jove T. Moya/SunStar Philippines)