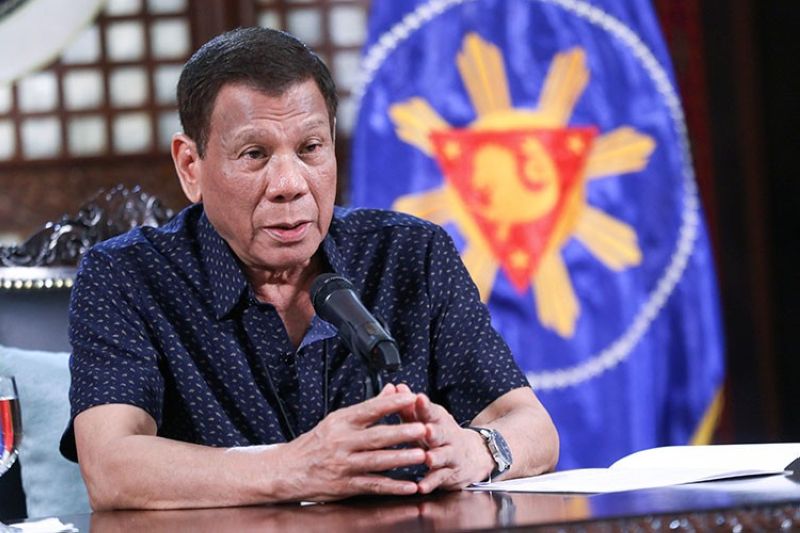 MANILA. In this handout photo provided by the Malacanang Presidential Photographers Division, President Rodrigo Duterte addresses the nation about the new coronavirus situation during a late night live broadcast from Malacanang on Monday April 6, 2020. (AP)

RESIDENTS of Luzon will have to endure another two weeks of “lockdown” as President Rodrigo Duterte extended to April 30, 2020 the enhanced community quarantine (ECQ) that requires millions of people in the country’s largest island to stay home to contain the spread of the coronavirus disease 2019 (Covid-19).

On Monday, April 6, Duterte, in a late night TV speech, said the government was desperately looking for more funds for a massive cash and food aid intended to prevent the poor from starving to death.

There have been appeals for middle-class families to be given emergency aid, too, he said.

“If there’s nothing to eat, a human being can be violent, especially if he sees his children without food and he’s driven to tears,” Duterte said, adding he has ordered the finance secretary to “steal, borrow, I don’t care,” just to produce more emergency funds.

Cabinet Secretary Karlo Nograles confirmed the extension of the ECQ in Luzon during the Laging Handa briefing Tuesday morning, April 7.

“’Yong ECQ is up to April 30, 11:59 p.m. Ito po ang rekomendasyon ng IATF (Inter-Agency Task Force on the Management of Emerging Infectious Diseases) at tinanggap ni Pangulong Duterte, at inannounce niya po kagabi. After his announcement, we verified it — the enhanced community quarantine is extended until 11:59 p.m. of April 30,” Nograles said.

Nograles said the IATF passed Resolution 20 recommending the extension and forwarded this to the Office of the President Monday night.

“Such extension of the ECQ shall be without prejudice to the discretion of the President to relax that implementation of the ECQ in some local jurisdictions or the ranting of exemptions in favor of certain sectors such as public health considerations and food security may warrant,” Nograles said.

He said the lockdown extension is needed because health experts need additional time to study the effects of the virus.

“Base sa siyensya at agham, and the way we understand the virus, ‘yung sintomas po n’yan puwedeng lumabas between five to 14 days from the time of your infection -- makikita po natin ang earliest effect ng ating ECQ April 29,” he said.

Nograles said there is no need for an extended lockdown in Visayas and Mindanao.

“We’ll have to monitor that day by day, week by week,” he said.

He said the peak of the pandemic might occur after the lockdown.

“Once the ECQ is lifted, people will be up and about again. That will hasten the spread of the disease,” he said in Tagalog.

“So what do we do? We need to increase of testing capacity,” he said in Tagalog.

The quarantine extension was announced a week before the lockdown is set to end on April 12.

In Cebu, Gov. Gwendolyn Garcia said it is too early to assess the situation in the province as it has only been a week since the ECQ took effect at 12:01 a.m. of March 30.

In her regular live news conference via Sugbo News on Monday afternoon, April 6, Garcia said there should be enough data analysis to ensure that it is safe to lift the indefinite province-wide ECQ.

“More than 100 percent, we have to be 200, 300, 400 percent sure that we shall have already flattened the curve and beyond that, we will also need to able to come up with a strict protocol on the new normal,” she said.

The governor lamented that even if the Provincial Government lifts the ECQ, “things cannot go back to the way it was.”

“We all have to adjust to the new normal which will be guided by protocols on socializing, gatherings, ceremonies and other activities that used to define us as a community,” she said.

“Let us not be complacent, let us be more vigilant. Let us show that we can do this the Cebuano way,” she said.

Cebu City Mayor Edgardo Labella also urged the public not to be complacent, especially since no new positive Covid-19 case has been reported in the city in the past few days.

As for extending the ECQ in the city, he said he will wait for the recommendation of health authorities and the IATF.

Mandaue City Mayor Jonas Cortes, for his part, said the President was justified in extending the ECQ in Luzon.

He said it is too early to lift the ECQ as the number of positive cases continues to increase.

“We still don’t have assurance that the curve will flatten. If necessity calls (for it) then the decision (to extend the ECQ) is right,” Cortes said in a mix of Cebuano and English.

Chan arrived at the decision after receiving reports that a female senior citizen in Sitio Bagumbayan, Barangay Maribago who had no history of travel abroad tested positive for Covid-19.

Based on the recent report by the City Health Office on April 7, the number of persons under monitoring rose from 181 to 208 in one day, while the number of patients under investigation remained the same at 13.

As of press time, the city had three positive Covid-19 patients, one of whom already recovered.

The mayor assured constituents that the City has enough rice and other relief goods to last a month.

He said they’re expecting the arrival of 50,000 sacks of rice.

Chan said some barangays are on their fourth batch of rice distribution.

Chan’s decision to extend the ECQ garnered mixed reactions from Oponganons, who posted their opinions on Superbalita Cebu’s Facebook page.

Some netizens complained about the daily struggle that comes with the ECQ, saying the stay-at-home order has greatly affected their means of livelihood.

Others thought the mayor made the right move to ensure that the virus is contained. (JTM, JCT, RTF, KFD, FVQ WITH CBQ)