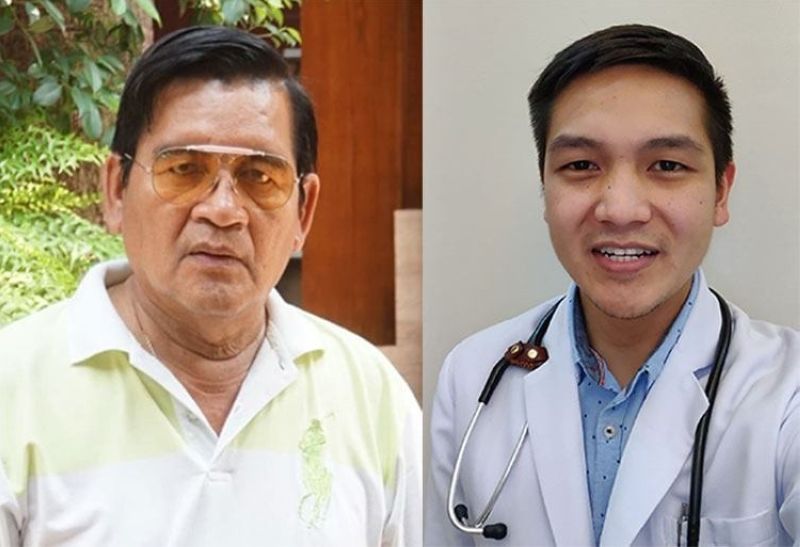 FIGHTING FOR FATHER. Dr. Francis Daclan (right) takes part of the medical team of the University of Cebu Medical Center in taking care of his father Porferio Jr. (left), who was infected with coronavirus disease. A devotee of St. Vincent Ferrer, Porferio, 70, recovered and was discharged from the hospital on April 5, 2020, the feast day of the saint. Daclan described his father's recovery as a miracle. (Contributed photos)

MOST doctors rely on their expertise and medicine to treat illnesses.

Some lean on their faith, which could be the most powerful spiritual drug against hopelessness.

For Dr. Francis Daclan, his 70-year-old father’s recovery from the dreaded coronavirus disease (Covid-19) was an answered prayer.

“As a doctor, I know I witnessed a miracle upon seeing papa’s improvements,” Daclan said.

Daclan was part of the team that treated his father, Porferio Jr. He never took a dayoff from the day Porferio was admitted to University of Cebu Medical Center (UCMed) in Mandaue City on March 19, 2020, until the latter was given a clean bill of health and discharged on Sunday, April 5.

Covid-19 is a new disease. Scientists around the world are racing to formulate a vaccine and medicine.

Daclan’s father Porferio has pre-existing conditions including diabetes, hypertension and chronic obstructive pulmonary disease when he tested positive for Covid-19.

Porferio’s symptoms started with a fever and cough. His family thought that it was just a recurrence of pneumonia. The family decided to just treat him at home.

The septuagenarian eventually had experienced diarrhea and shortness of breath last March 19. On the same day, Daclan knew he had to bring his father to the University of Cebu Medical Center (UCMed) in Mandaue City. After seeing the X-ray, Daclan suspected his father had been infected with Covid-19.

Porferio was admitted to the intensive care unit of UCMed last March 19. An endotracheal tube had to be inserted down his throat and he had to be hooked to a mechanical ventilator to assist his breathing.

Daclan, as an internal medicine physician, became part of the team that managed his father’s condition. He was on duty during the entire admission of his father.

Porferio was in critical state during his first week of admission. Aside from the complications in his lungs, he also developed heart complications. He then lost his ability to talk.

“I saw it in his eyes that he was not comfortable. I saw fear and anxiety in his eyes at that time, but I know he was fighting really hard,” Daclan said.

Daclan’s immediate family and other relatives were not allowed to visit his father.

The anxiety, he said, that the family had felt was overwhelming. But they found solace in prayer.

Daclan said he could not tell how his father contracted the disease. Porferio had no history of out-of-town travel weeks prior to his hospital admission.

Before Porferio fell ill, he had been on his usual routine, which included going to public places. This was before the imposition of the enhanced community quarantine in Cebu.

The Daclan family often prayed for nine days before St. Vincent Ferrer’s feast day, which is celebrated every April 5. Daclan himself prayed.

While in the hospital, Daclan said he remembered what was his father told him when he was still healthy: St. Vincent never failed him after he completed the novena.

Over the next two days, Porferio was still in critical condition. But he was awake.

Fear of losing a father

As a son, Daclan said thoughts swarmed inside his mind, including the fear that he would be coming home alone without his father.

When his family was on the edge of losing hope, Porferio’s condition began to improve. His oxygen requirements became less and less, his muscular strength increased and his face lit up.

Soon enough, Porferio got better. He was able to walk and speak on his own.

He got discharged on the 17th day in hospital, in time of Saint Vincent Ferrer’s feast day last April 5.

As no doctors want their patients to lose their battles against various illnesses, Daclan said Covid-19 patients must keep on fighting and must not lose their faith.

Daclan said his gratitude to his fellow doctors who helped in taking care of his father could not be described in words.

He recognized the sacrifices of other frontliners, medical support staff, security guards and janitors, among others.

For now, Daclan and his father are under self-imposed isolation in their respective homes, hoping that soon they can bond with their family again.